After the not planned -> Travelling to the Emirates in April <-  our trip took us – also not planned for 2016 – for a week to Bibione.
This holidays already should took place in December 2015 but I need to cancel.

While this time in Germany and Austria still was school, we started only at 8:00am.

We not considered that in Italy already holidays started early June.
This point we recognized as we came into traffic jam and took us 1hr. for only 13km.

After check-in at the agency and unloading the car we went shopping the most necessary things and finally to the beach. 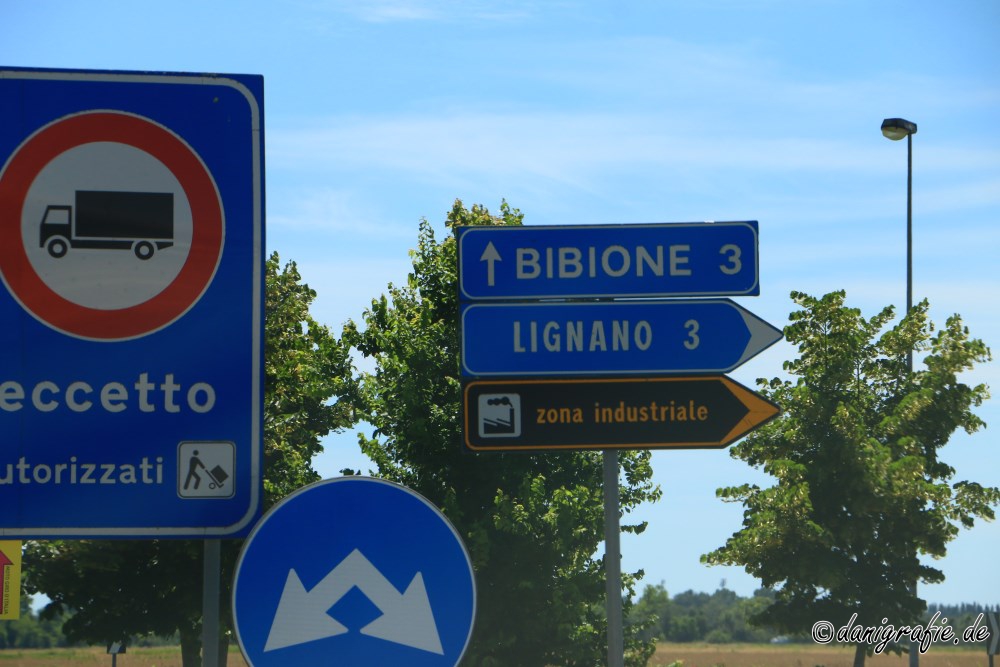 right before arriving at Bibione 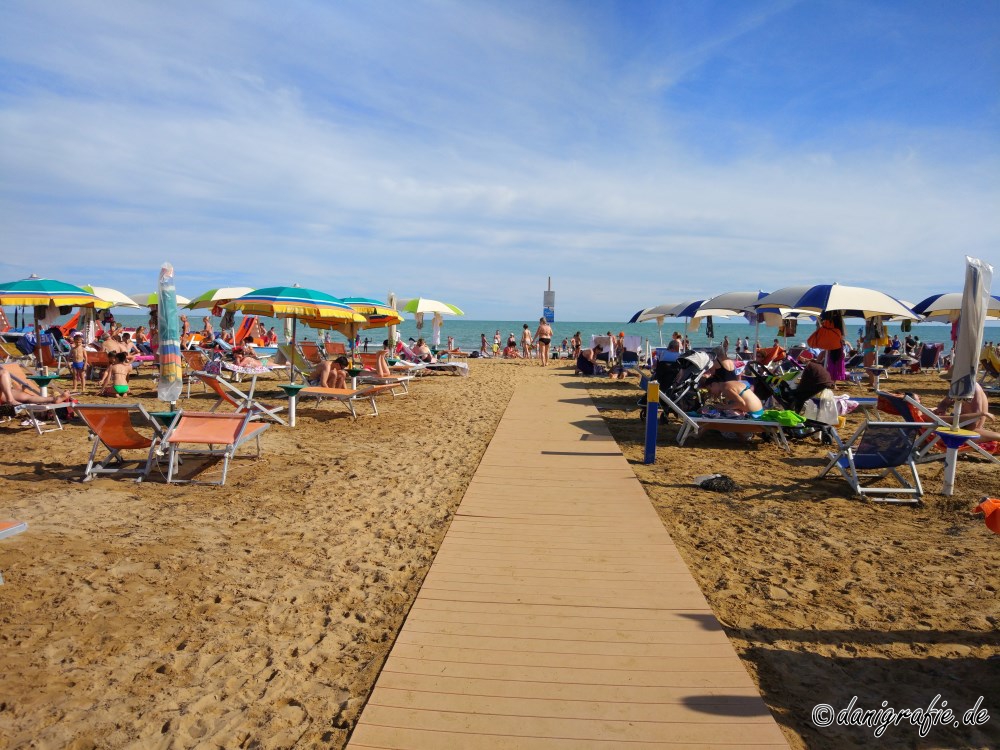 In tourist areas it’s no problem to go shopping also on Sunday.
So we did our “bulk buying” for the whole week and exploring the pedestrian zone. 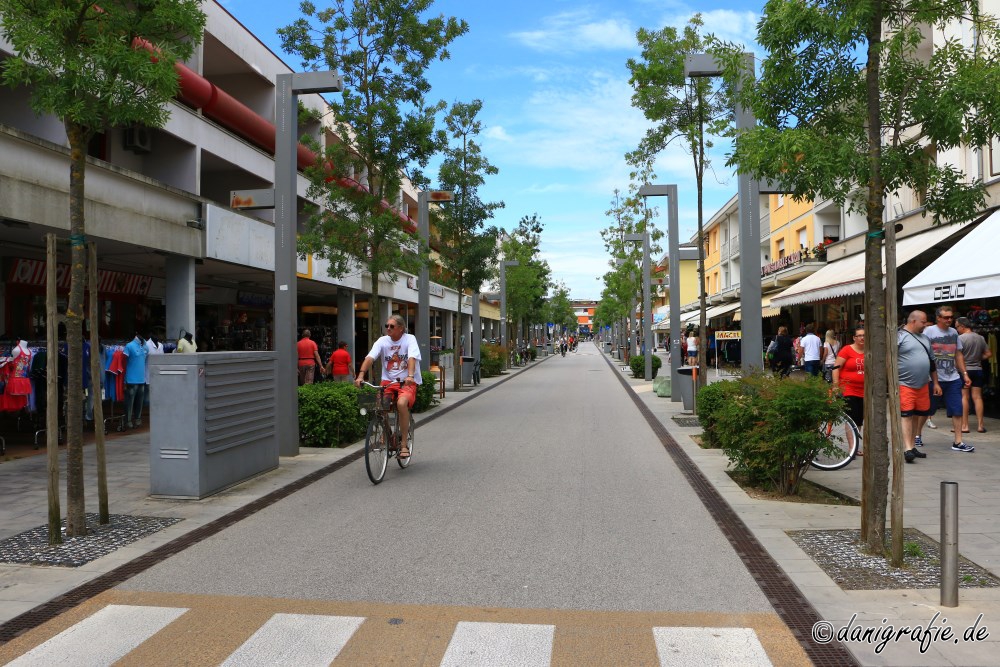 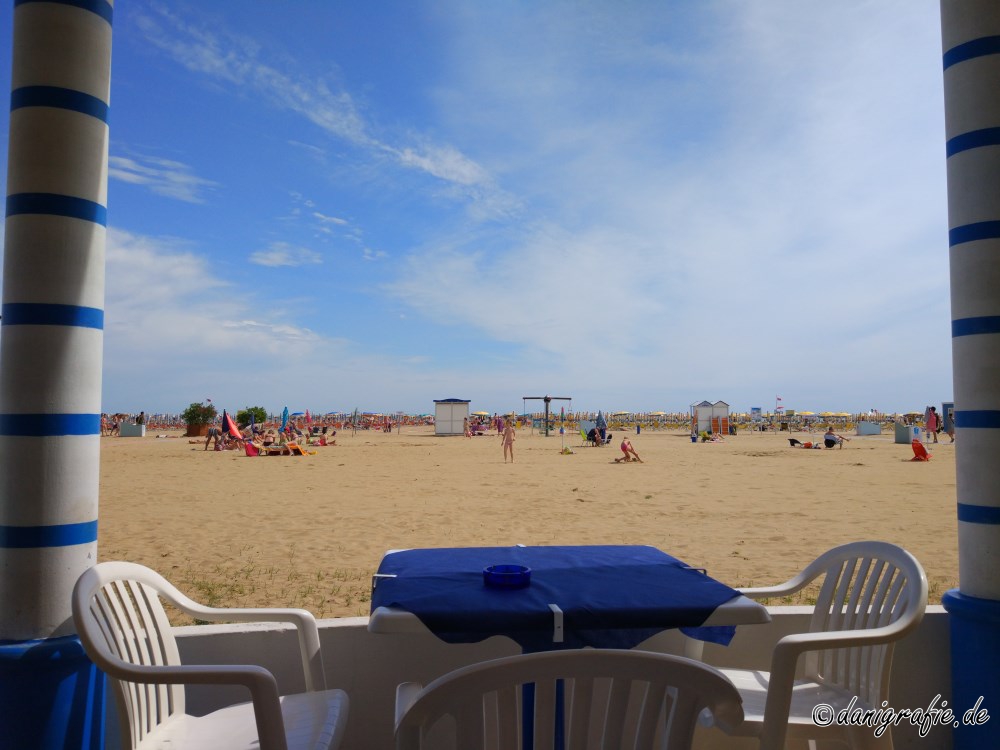 View from a beach bar to the beach

For 11:00pm the local administration announced a big firework.
The time between dinner and the firework we used to see the colourful lighted fountain in the middle of a roundabout and take some long exposure photos as well. 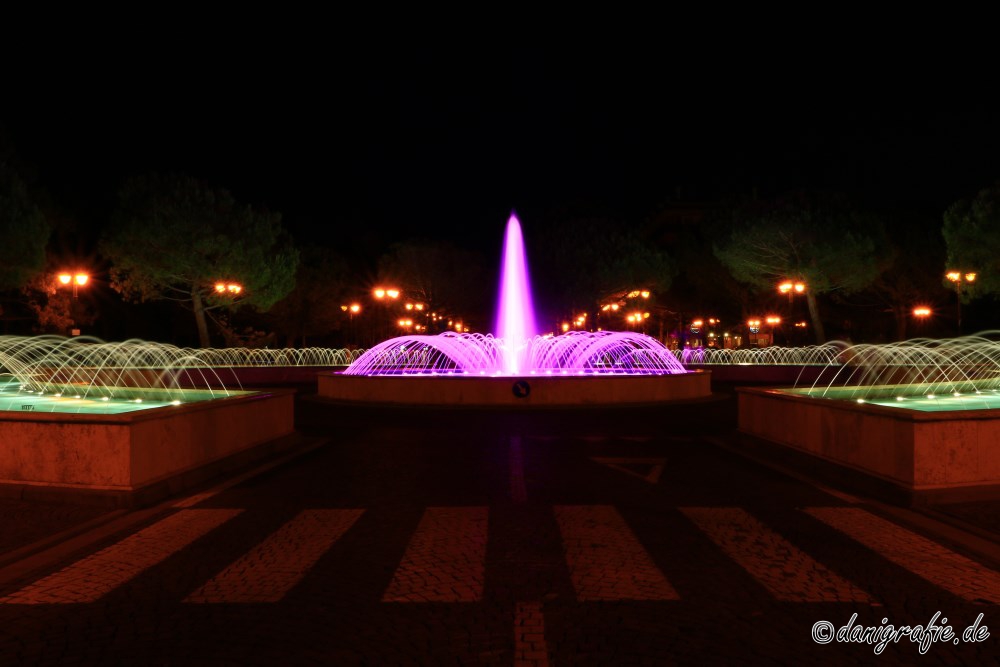 Finally we quickly walked downwards to the beach as suddenly we heard that the firework already started before 11:00pm.

Thus this in the video the beginning of the firework is missing. 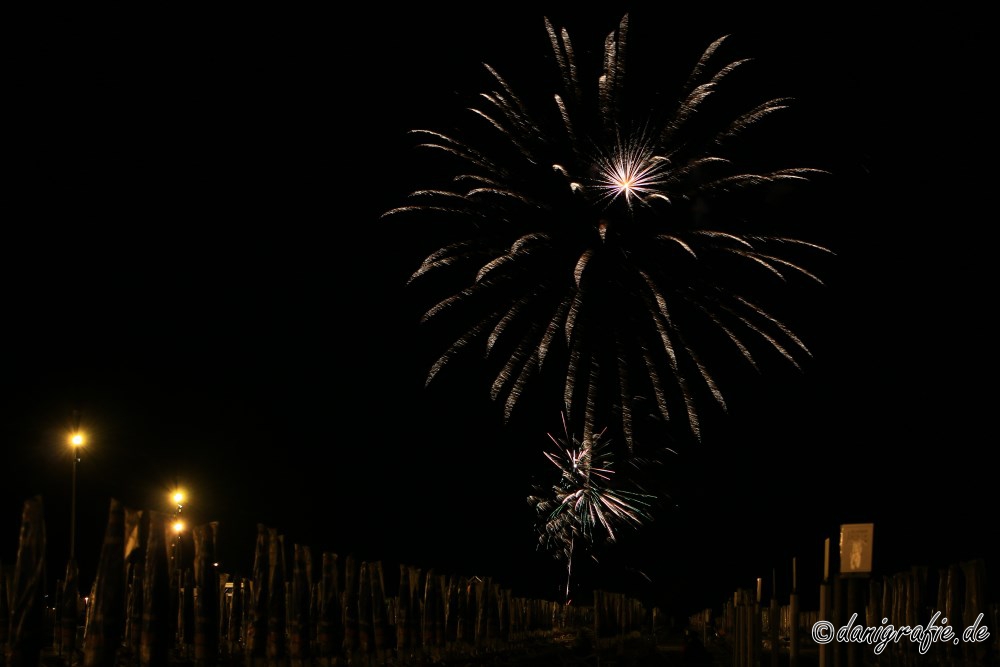 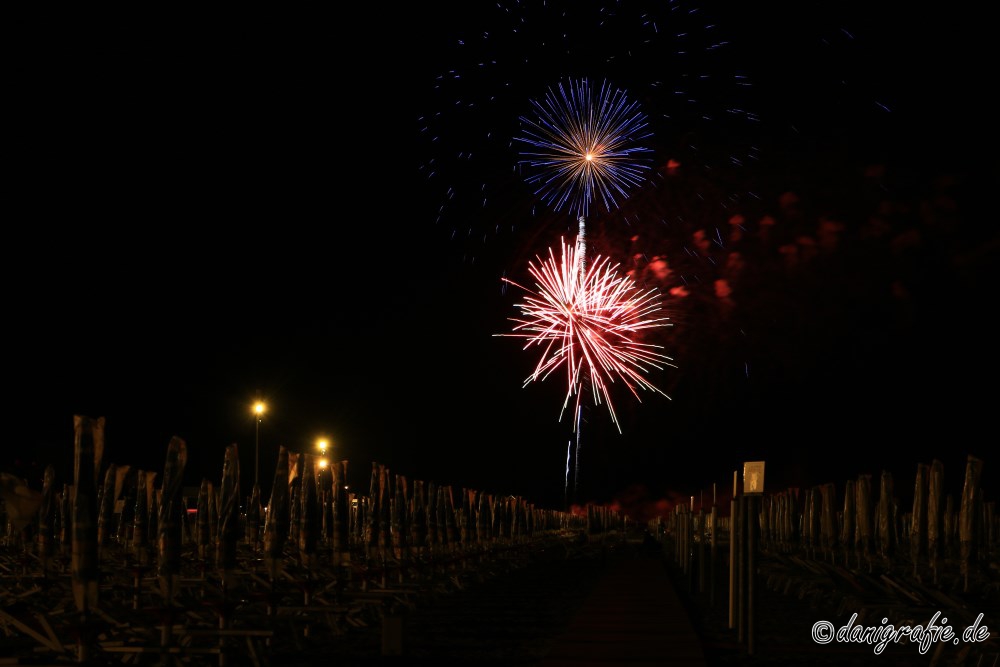 I took some long exposure photos after the amazing firework was finished. 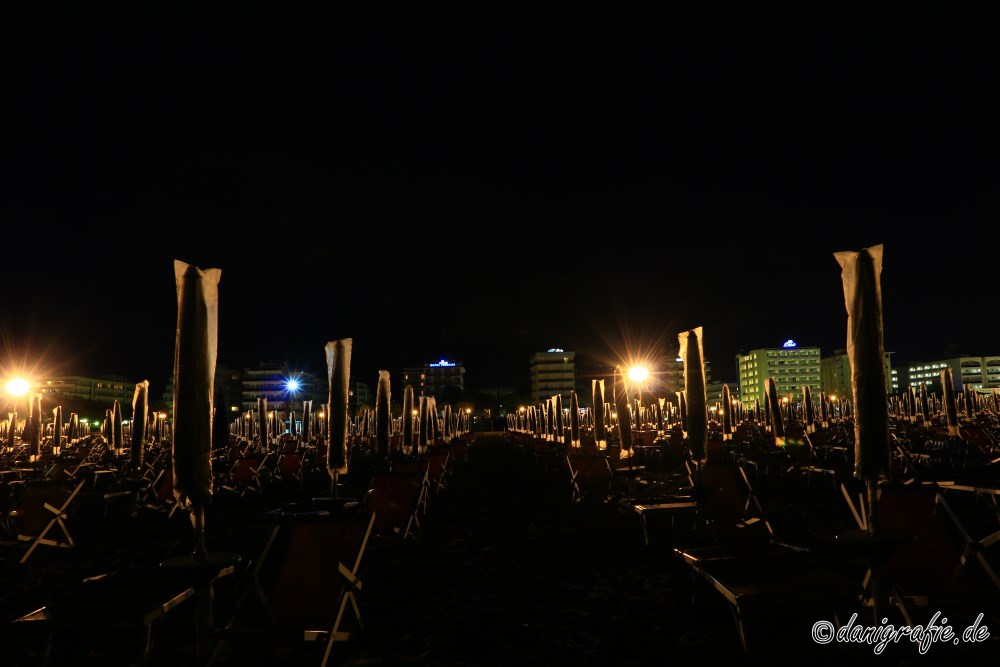 Usually, on this day we planned to have our day trip to Venice.
But due to the cloudy weather, we postponed this trip to Wednesday.
So we changed the Venice trip with the Caorle trip which was scheduled for Wednesday.

Around 45mins we arrived at the very wide sandy beach in Caorle and went downwards to the church called “Santuario della Madonna dell’Angelo”.
This church is located on a kind of “horn” – seen from bird’s eye view.
The special of this castle is the bell tower which is untypically separated from the main church building. 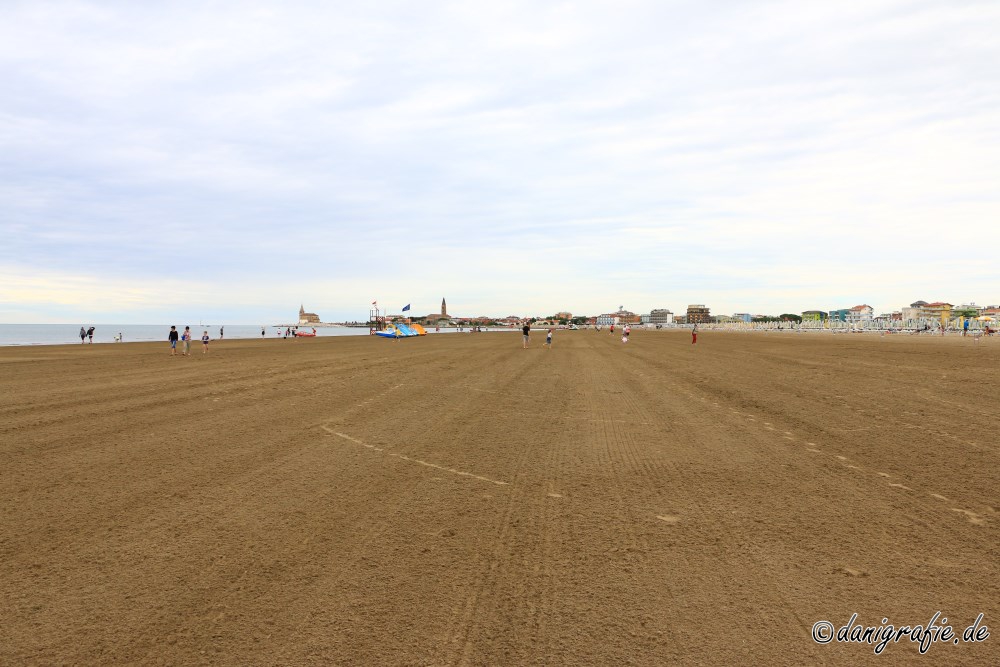 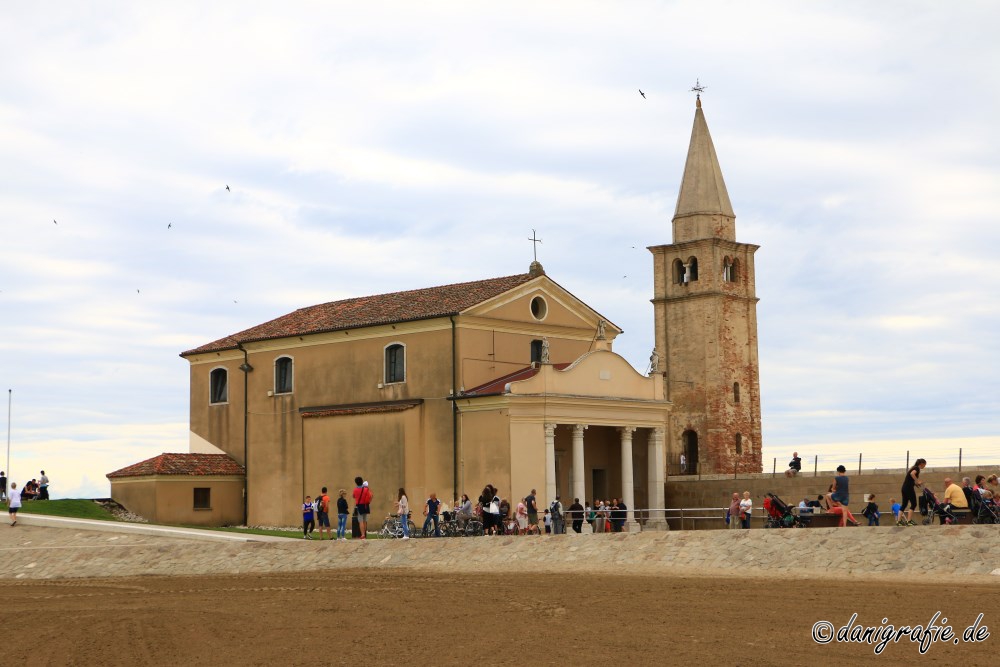 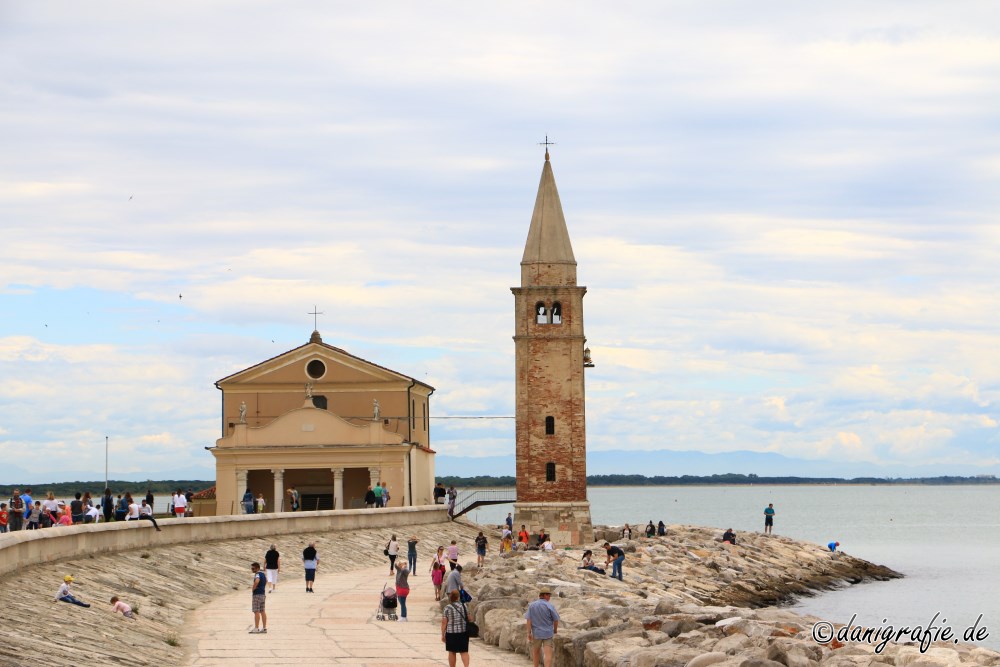 Along the boardwalk we walked straight to the old town as well as to the “Duomo di Caorle”.
The bell tower from the “Dome of Caorle” leaned while the years and looks like the “Leaning Tower of Pisa”. 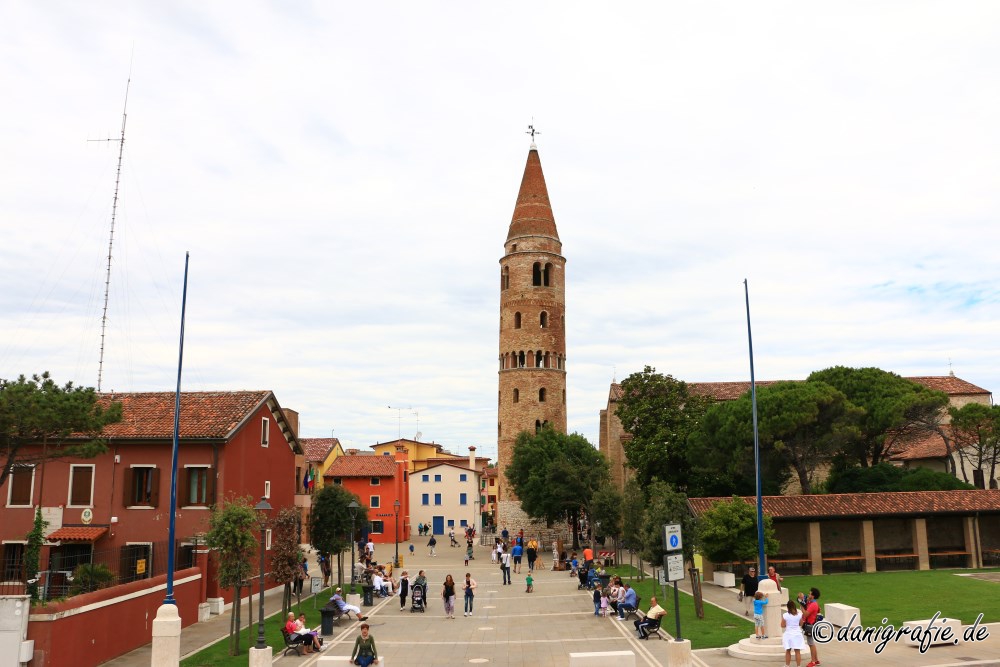 The old town is mostly well-preserved and some buildings looks like being in origianl condition.
Some houses have been built closely together that’s not possible for two people to pass each other.
And about the colours of the houses it’s debatable. 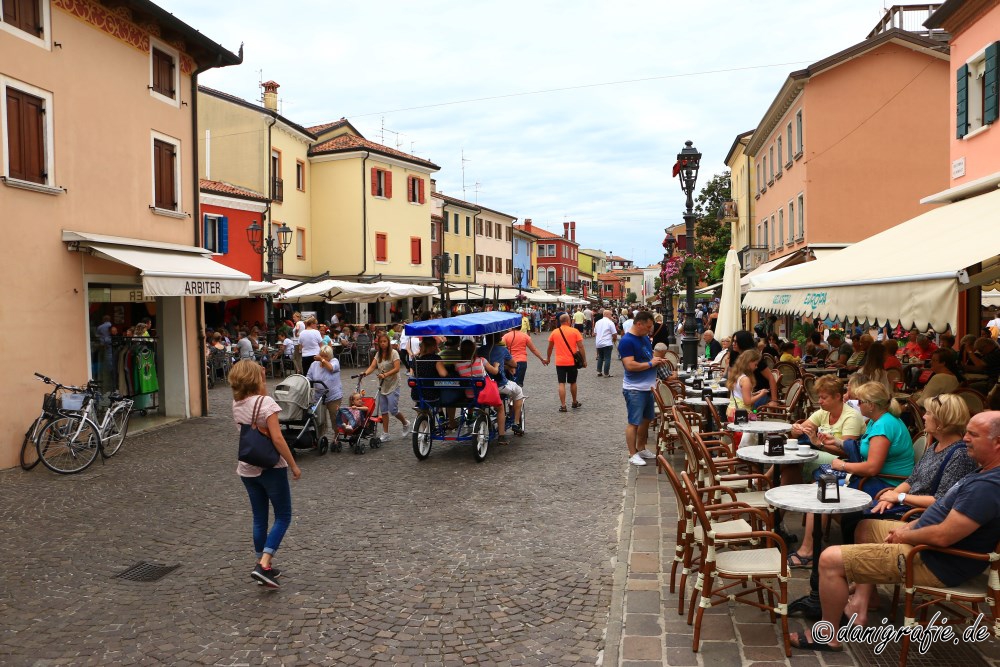 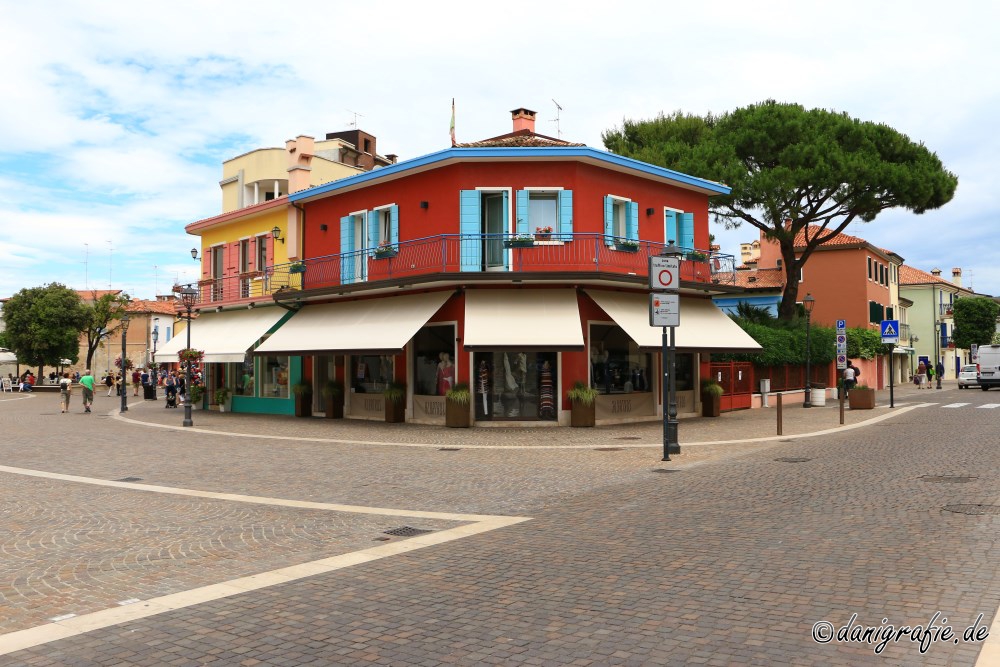 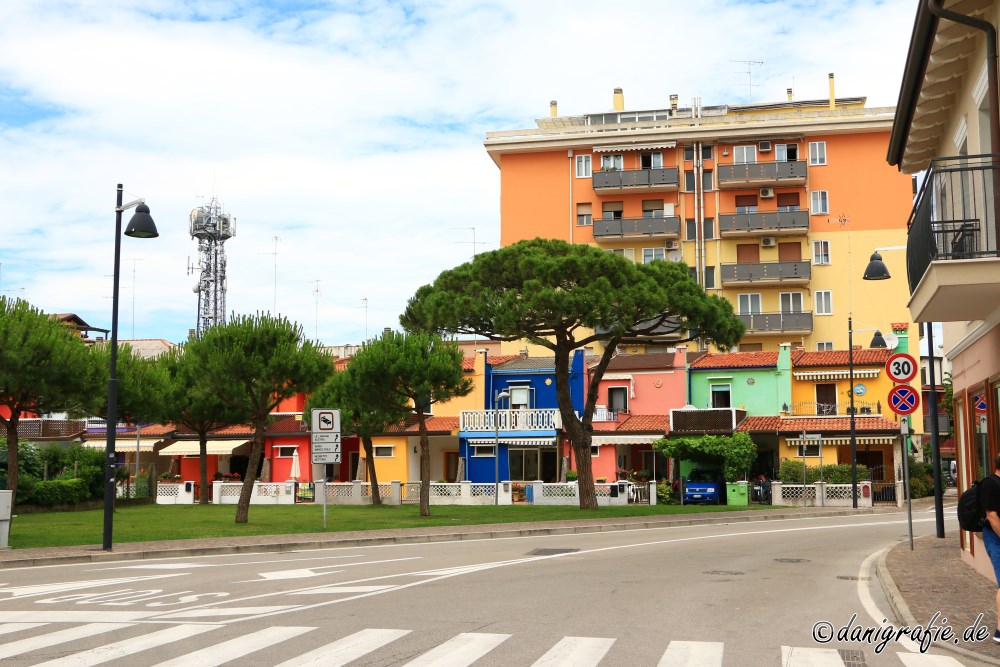 is there any colour group missing – or already  each colour represent?

Before returning to Bibione, we made a detour to “Duna Verde” to some wave-breakers. 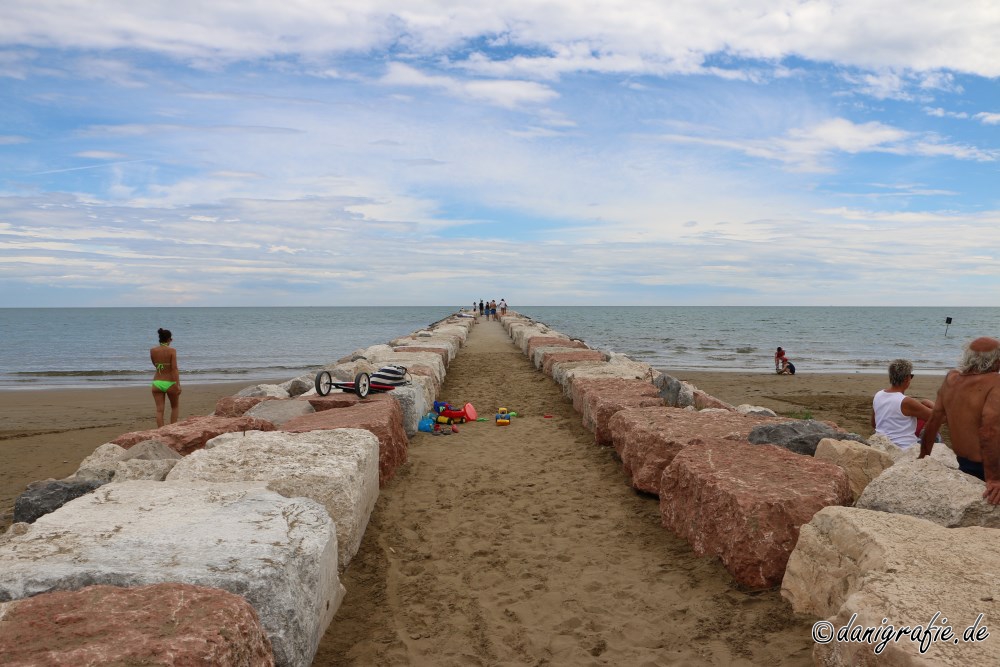 Each Tuesday, a big local market takes place.
On this market you can find towels, shoes, mussels and more.

While the morning the weather became better and better again so it was perfect for the beach.

In the early evening we made a side trip to the nearby city Bibione Pineda where we’ve already been some years ago.
At Pineda we made our first stop at the harbour “Porto Baseleghe” to see the sunset.
Afterwards we moved to our favourite Italian restaurant. 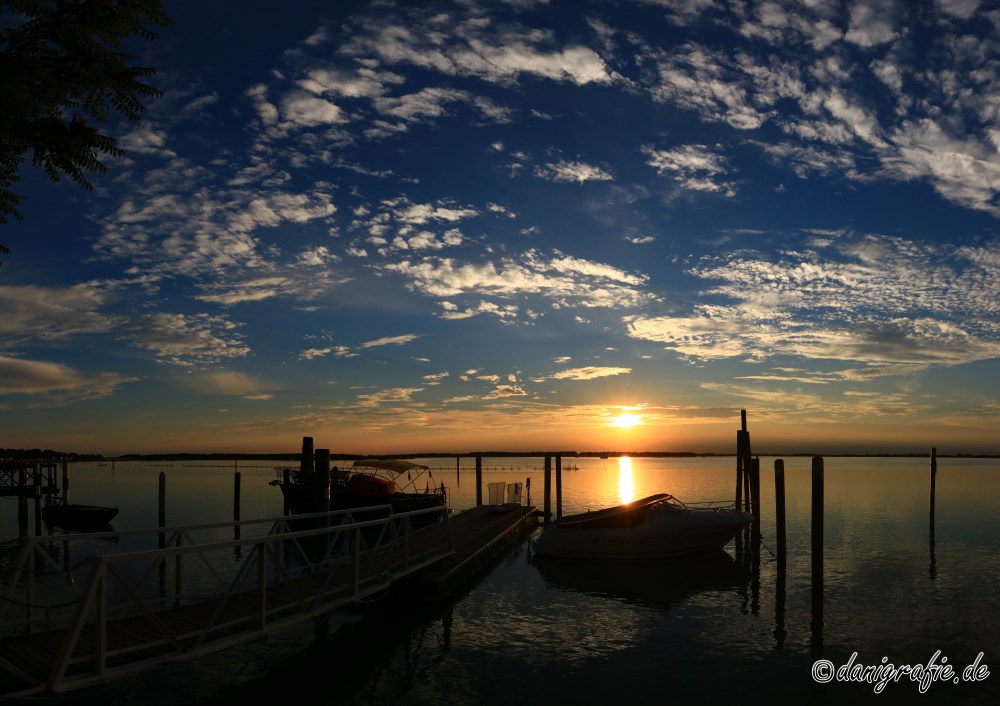 Today’s Wednesday was our auxiliary date for the Venice day trip.
Luckily this day was nearly cloudless blue sky.

We took the train (only 8€ oneway for one person from Latisana to Venice) to the main island of Venice.
To reach our major destination – the Piazza San Marco – we took the “Vaporetto” (a water bus).
While the bus trip, we saw a lot of places and views from Venice which are not visible while walking through the alleys on the main island. 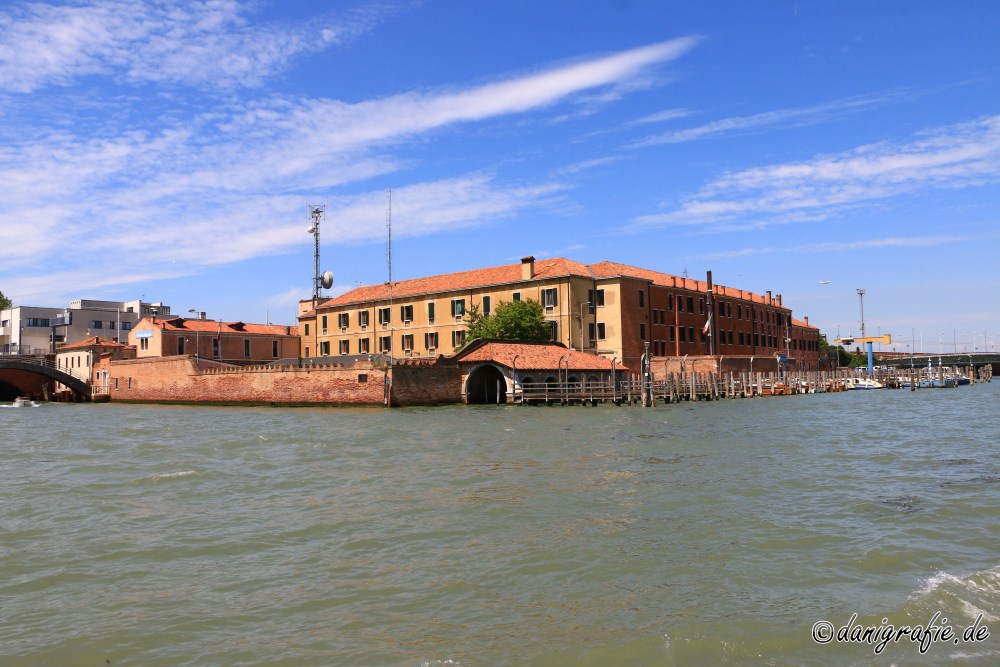 It was worth it to pay some more Euros for the water bus as we had a great view to the St. Mark’s Basilica, the Doge’s palace and the “Prigioni nuove” (left to right).
Afterwards, it would be cheaper to buy the day tickets as we also took the water bus to return back to the train station. 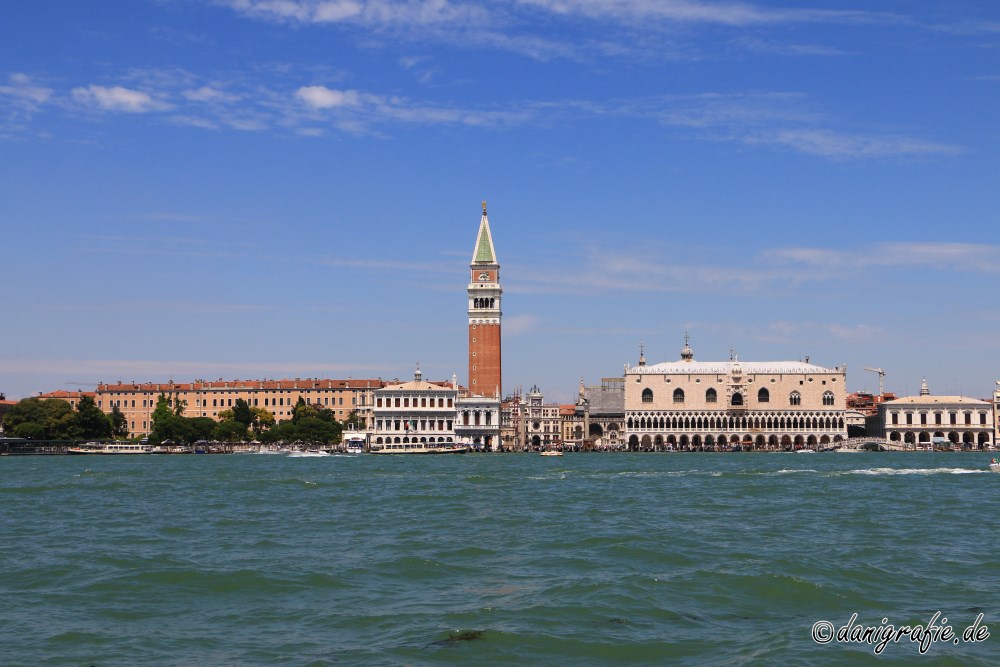 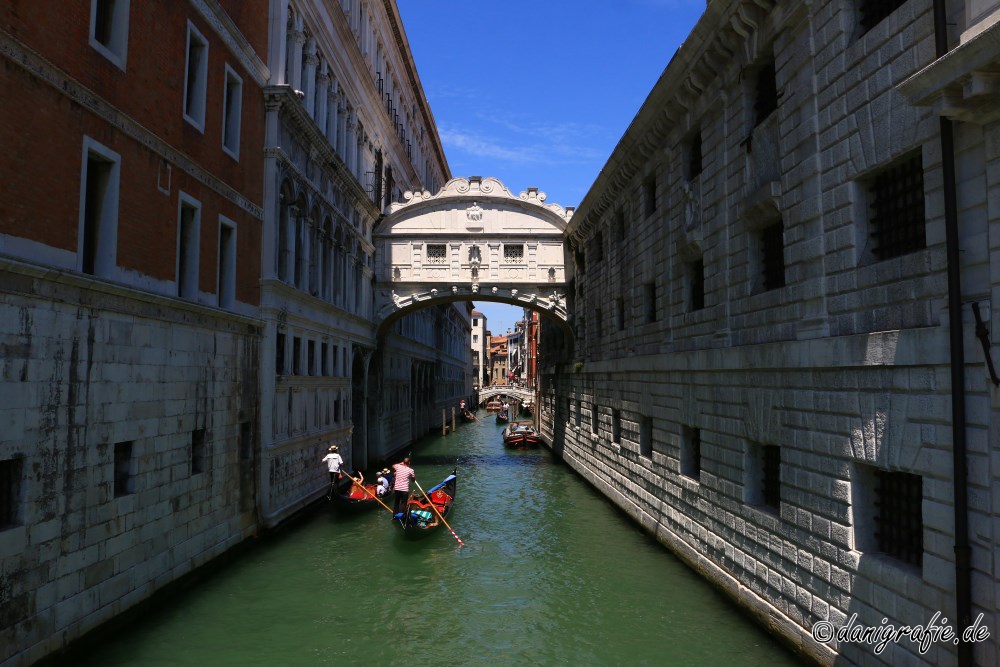 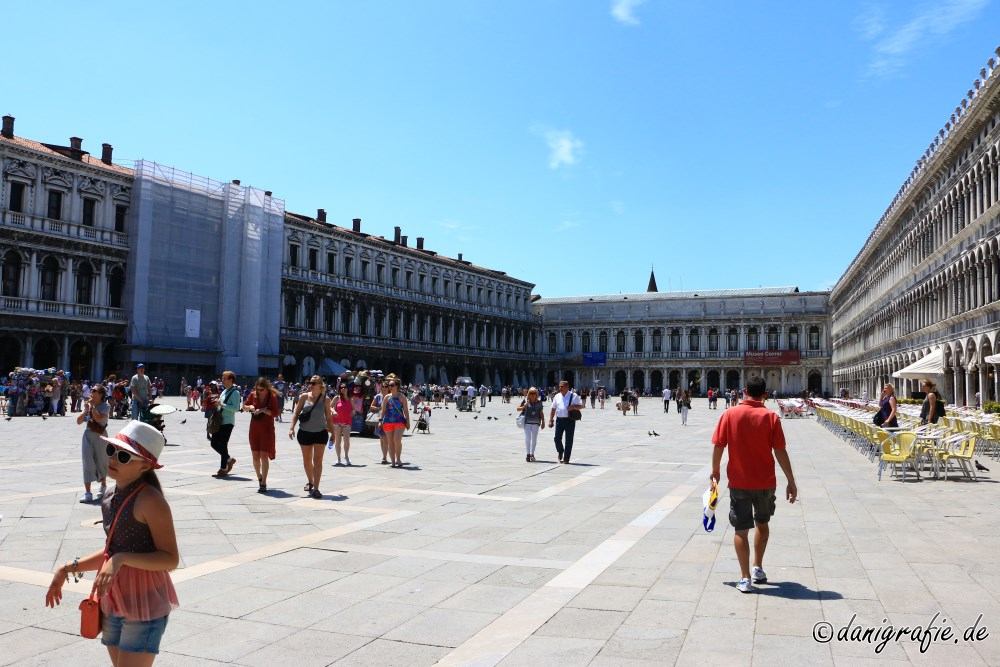 After looking around the Doge’s Palace and the St. Mark’s square we were looking for some refreshments.
We quickly had to realize that all the restaurants around the Rialto Bridge only serve drinks when ordering lunch, too – but nobody was hungry.
We decided to look around on other places as the area around the Rialto Bridge is pretty sublime.
This is discernible on the interior of the restaurants and the gondolas nearby. 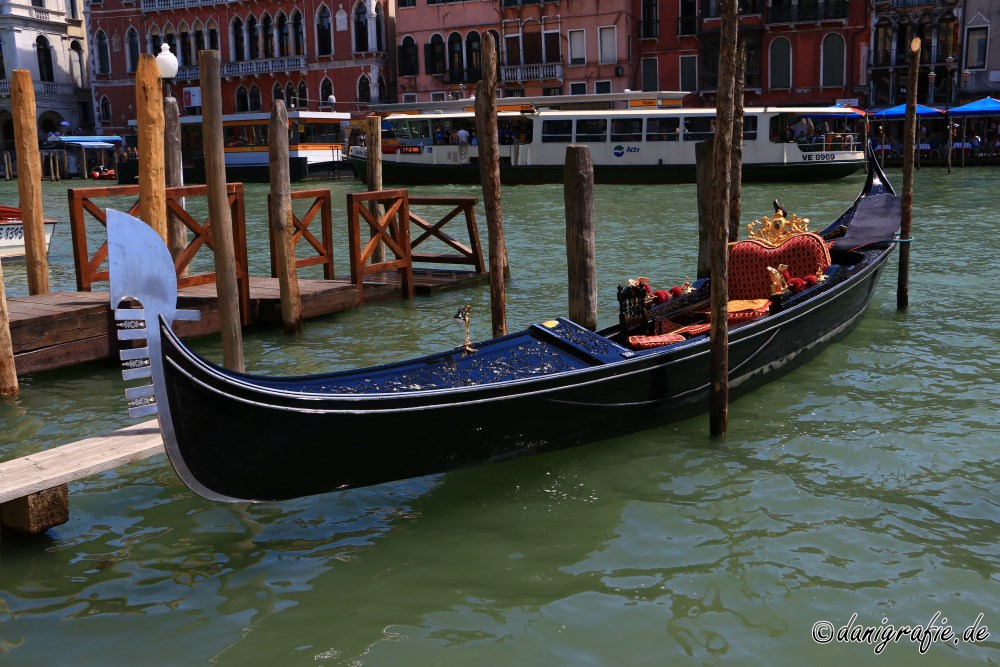 Our exploring tour continued after this short break.

As you may imagine, several parts of Venice not look as good as the main “tourist routes”.
Crumbling walls, temporarily repaired footwalks, narrow and dark alleys, canals with sea grass and so on. 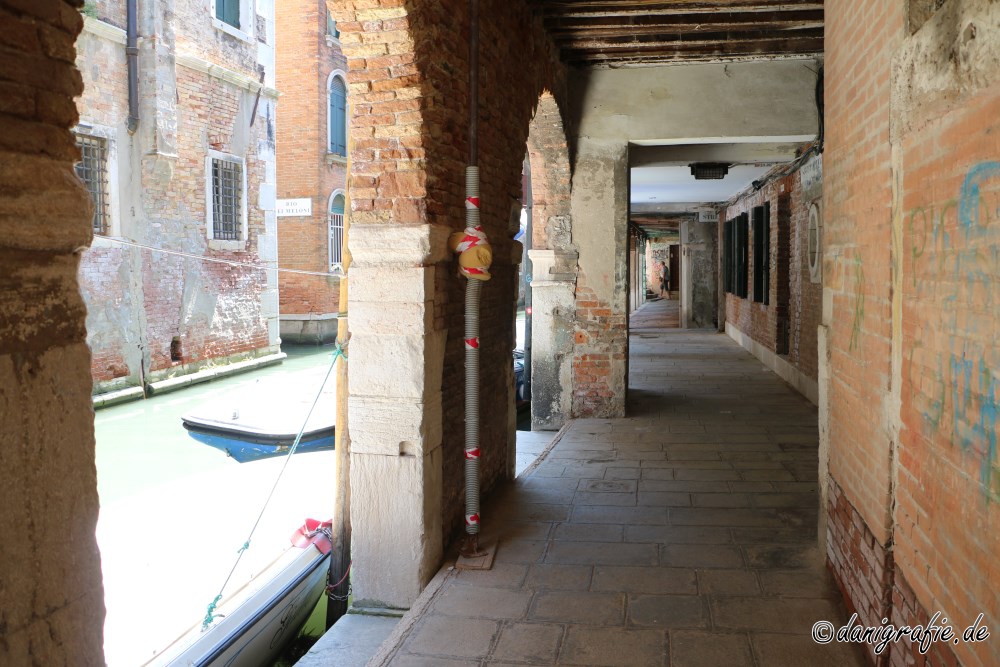 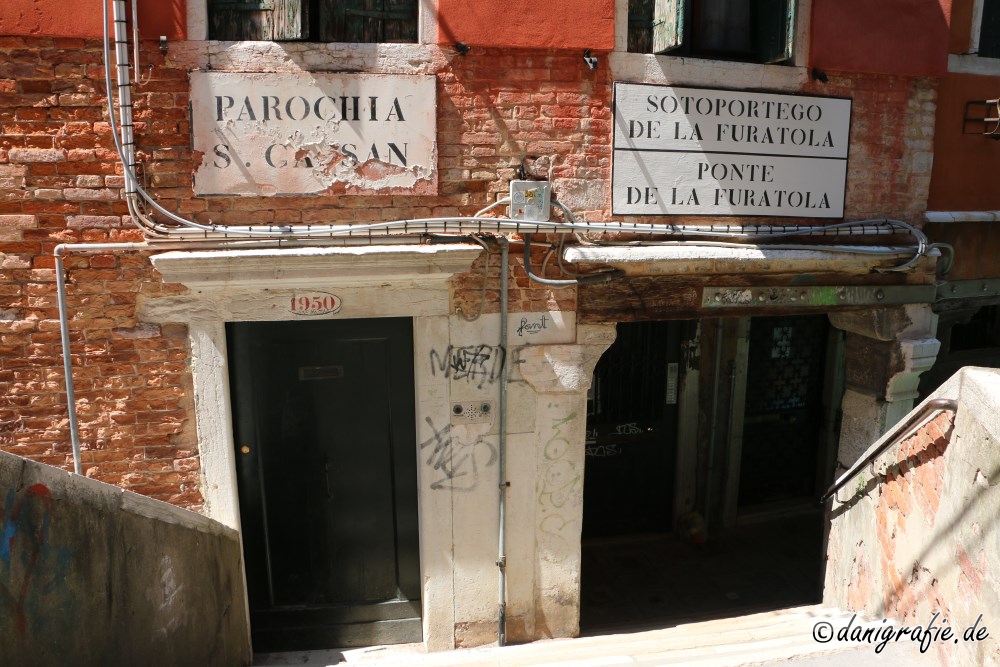 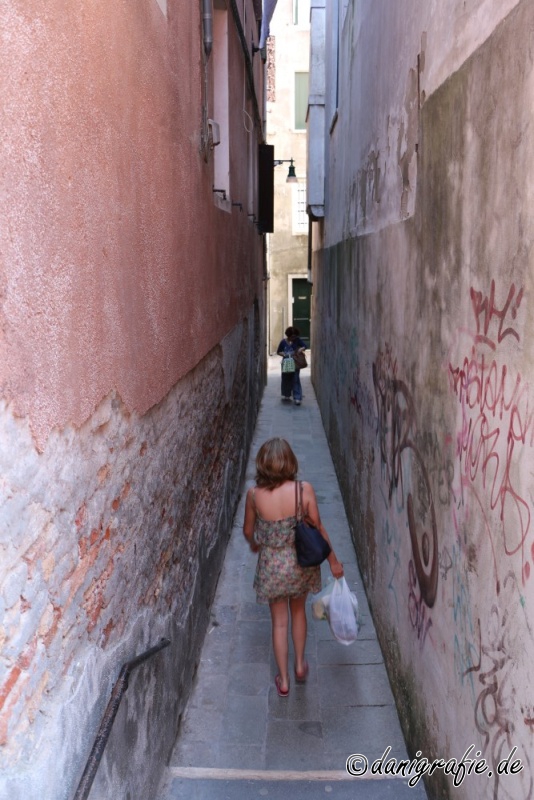 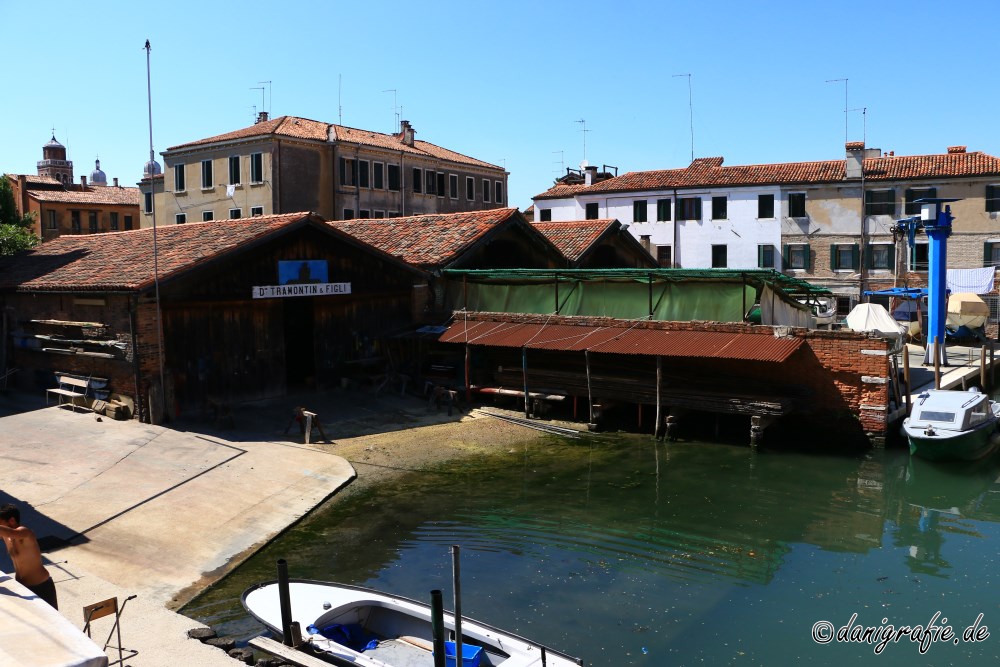 We finished our exploring tour – as well as the Venice trip – on the Accademia Galleries.
There we looked for some souveniers before returning back to the train station in Venice by water bus again.

The bus tirp was through the Grand Canal – crossing below the Rialto Bridge which was under construction and covered by a big advertising poster. 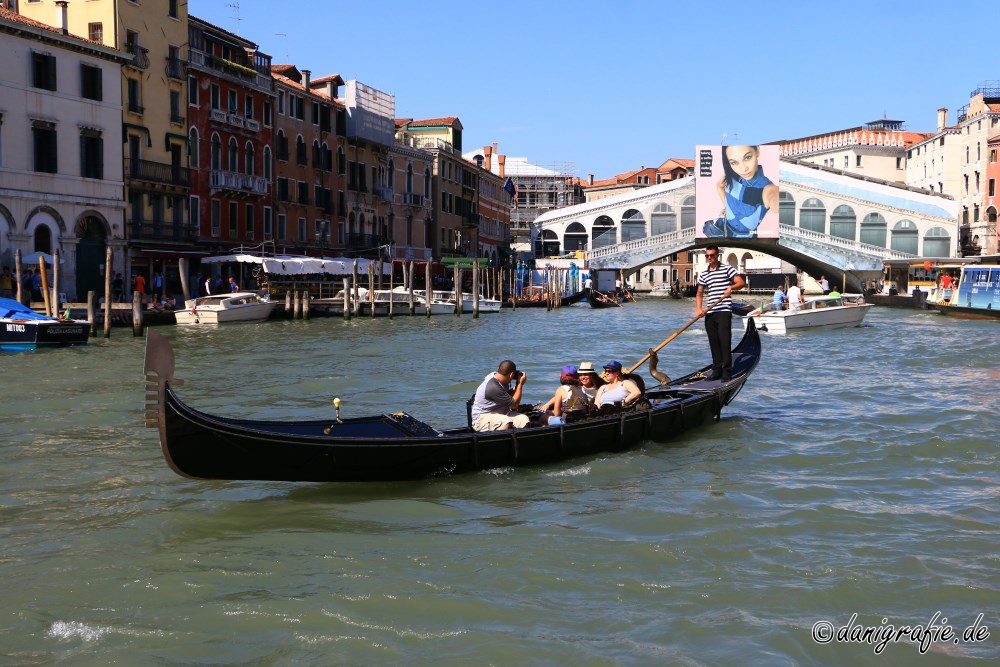 Rialto Bridge from the Grand Canal

Finally after driving back from Latisana to Bibione, we need to make one last stop at the well decorated roundabout of Bibione for taking photos. 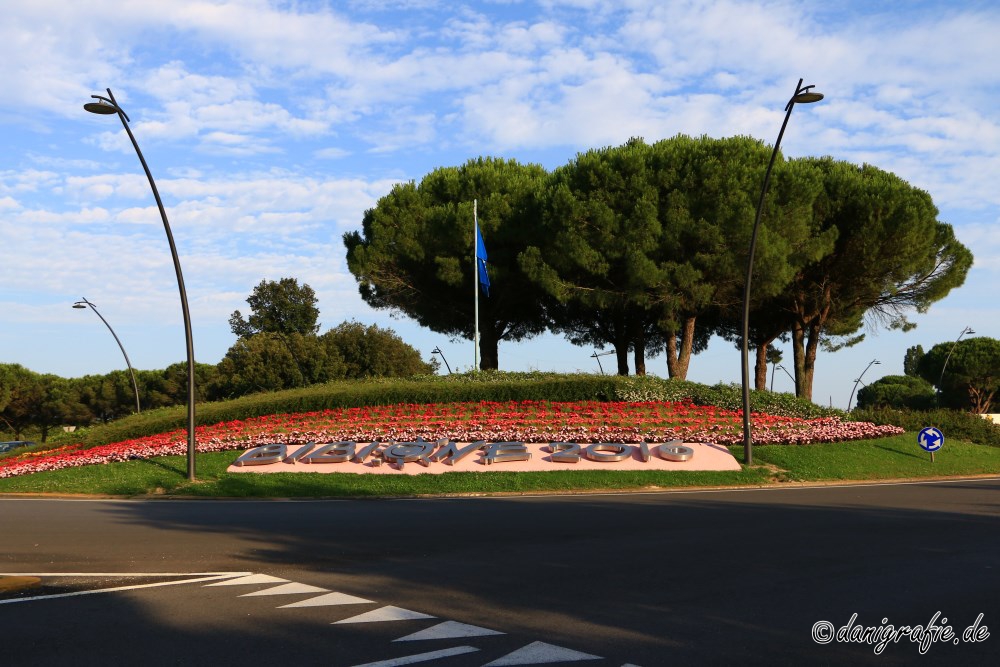 As a result of the tiring Venice trip, we had to relax on this day on the beach.

In the afternoon, I walked down to the fountain for taking photos by daylight. 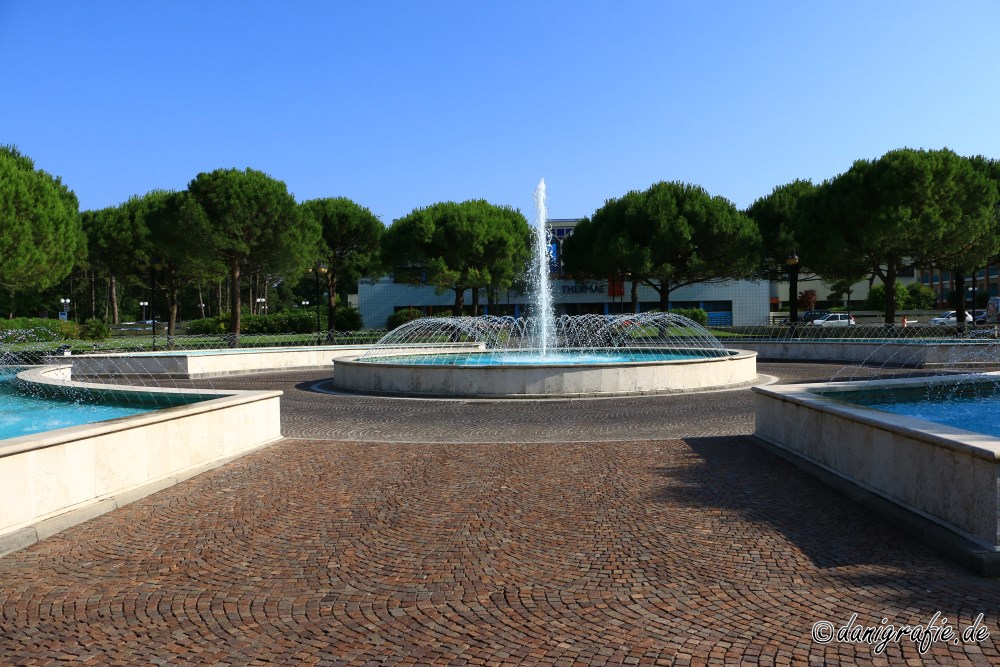 We also relaxed on our last holiday on the beach again before driving home on early Saturday.