In opposite to the before holidays in Europe, this time our holidays took place in the Emirates.
As we’ve never ever been there before – and not will do again in the near future – we created a comprehensive program.

We started our holidays on Sunday afternoon at the Munich airport. 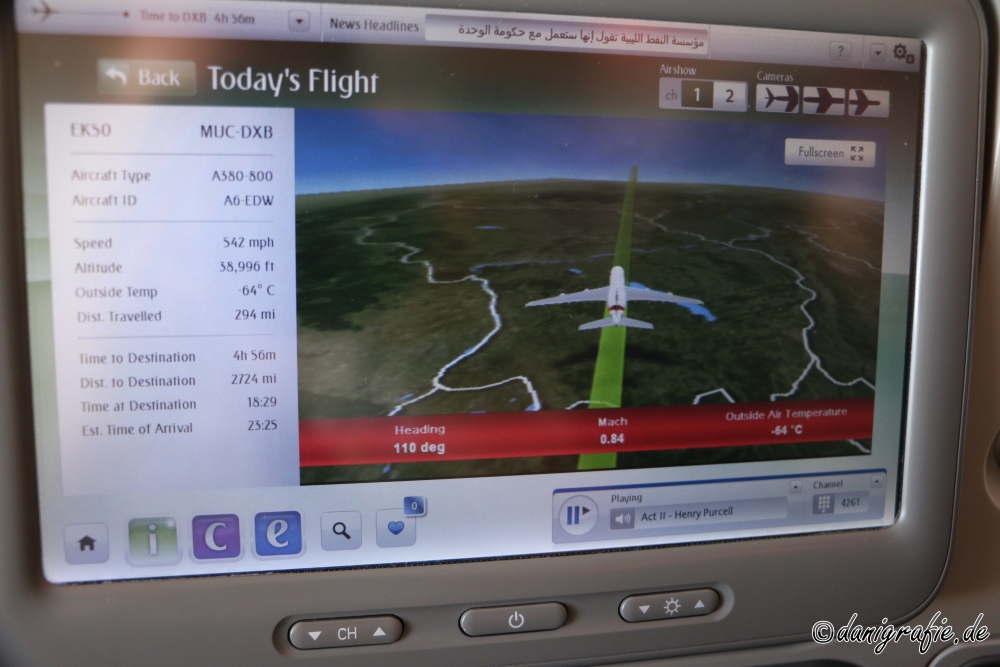 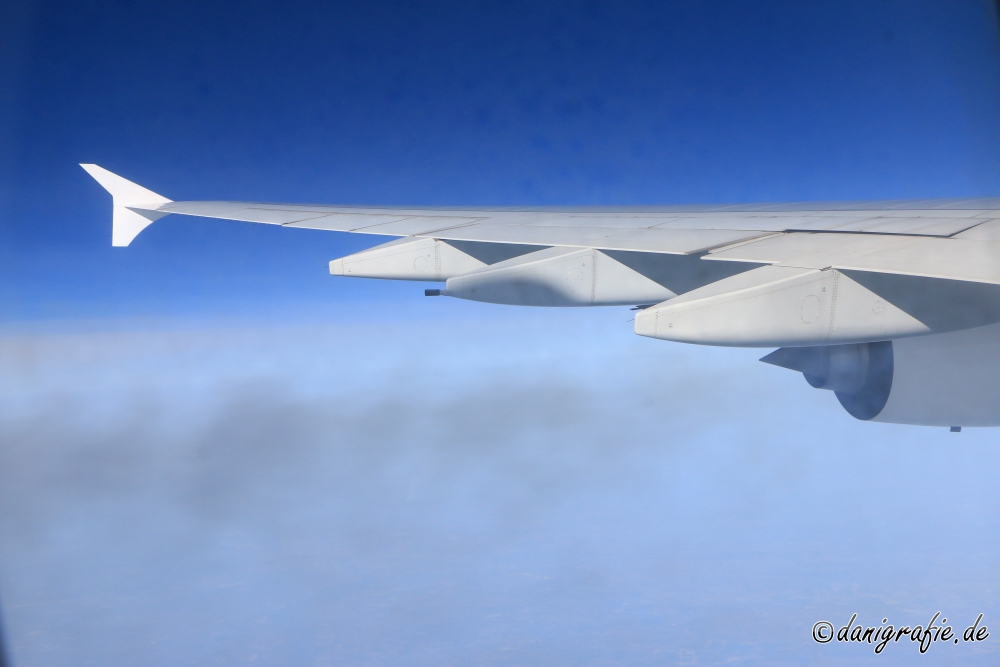 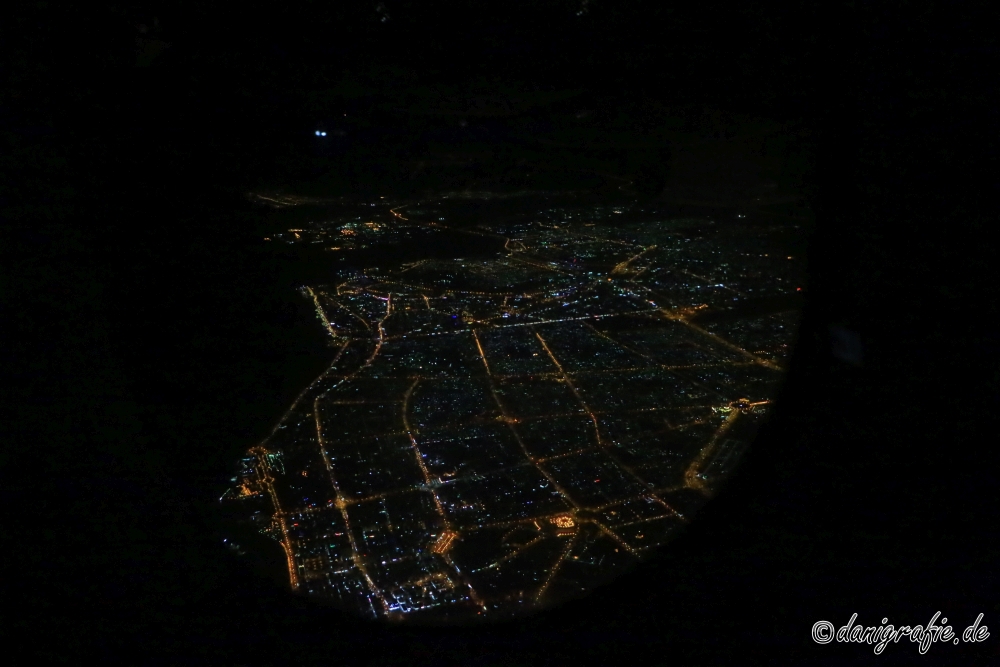 Dubai at night from above

After a 6hrs flight we landed right before midnight at “Dubai International Airport”.
This day ends with a personal and luggage check at the airport as well as a final bus journey of 150km (93 miles) to our holiday village  “Ras al Hamra Village”.
————————————————————–

We started our week on Monday after a long sleep with a cool beer at the hotel bar.
Right after getting the bill, we expected that this holidays might become a little expensive:
We had to pay for a 0.5 liter (17oz) “Becks” – converted into USD – around USD 9.00. 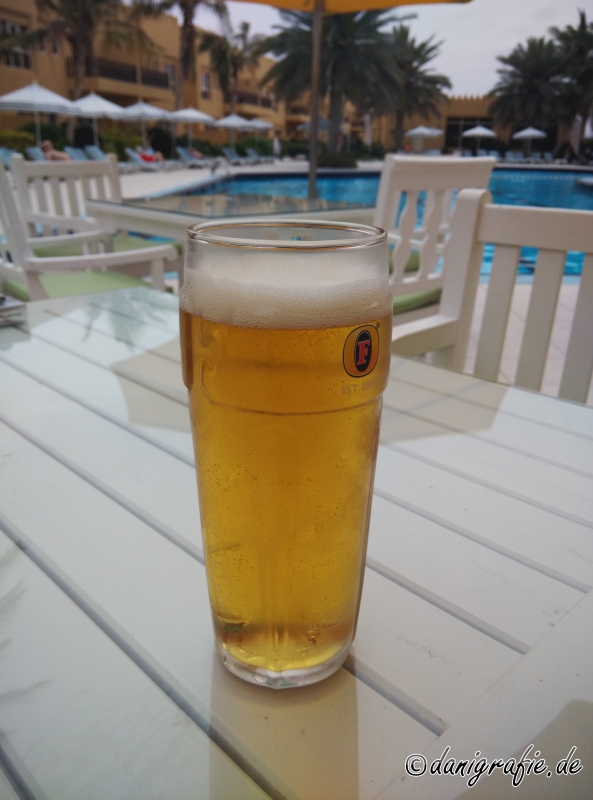 the 9-USD-beer from the hotel bar

After this shock we started to explore our village as well as the nearby environment.
In a nearby shopping mall – called “Al Hamra Mall” – we bought the most important things, mainly water because their tap water is not drinkable. 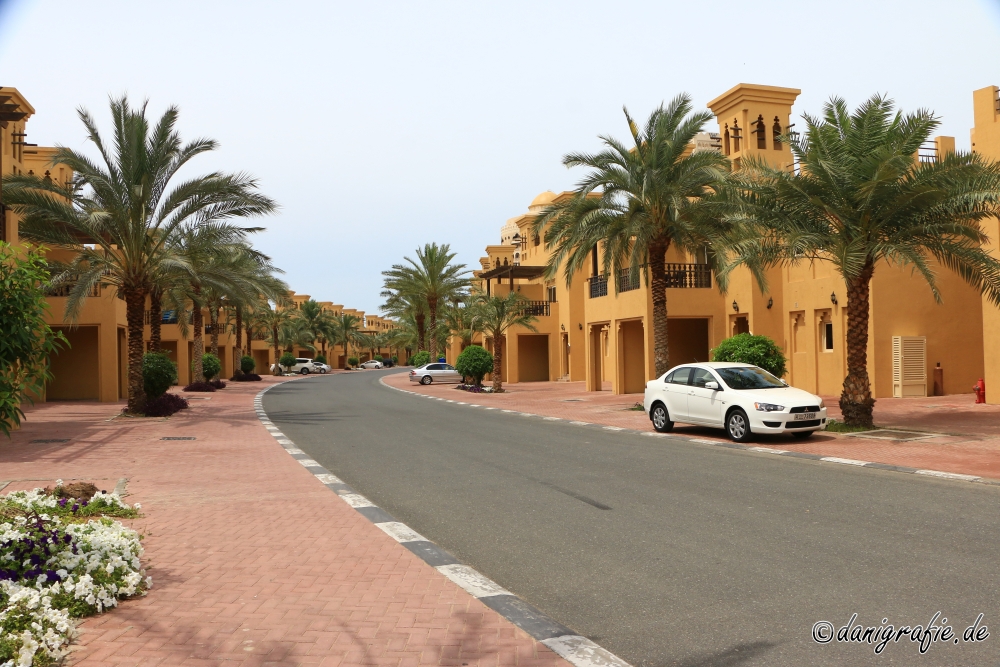 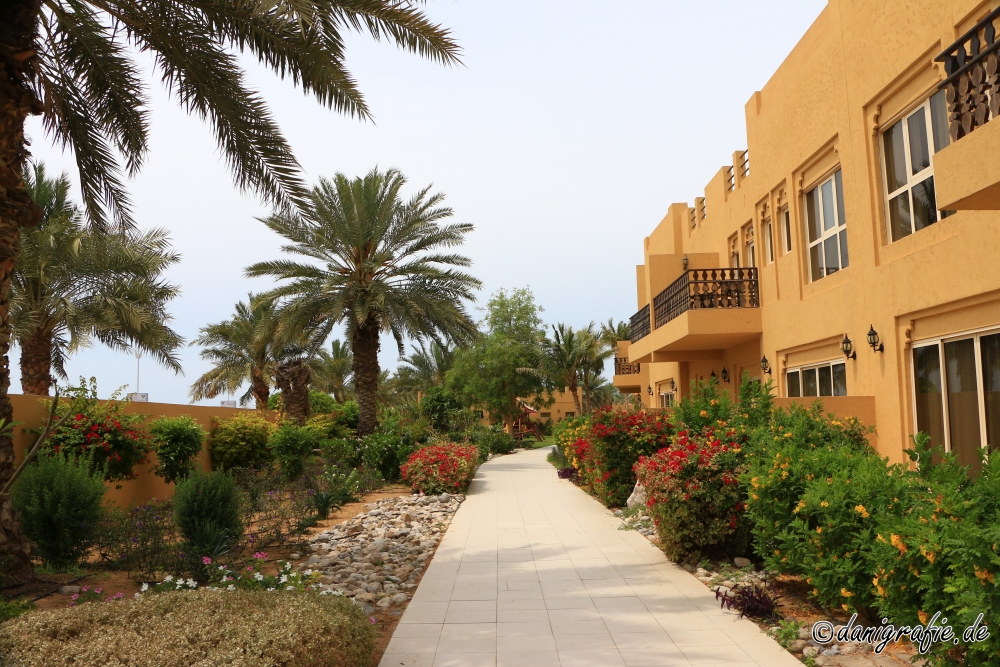 For the coming Tuesday we’ve booked a Dubai tour already in advance in Germany.
After travelling 2hrs from our village to the city because of a huge traffic jam in despite of a 7 lanes highway straight to Dubai we arrived there.
The tour took us to a lot of very interesting places there: 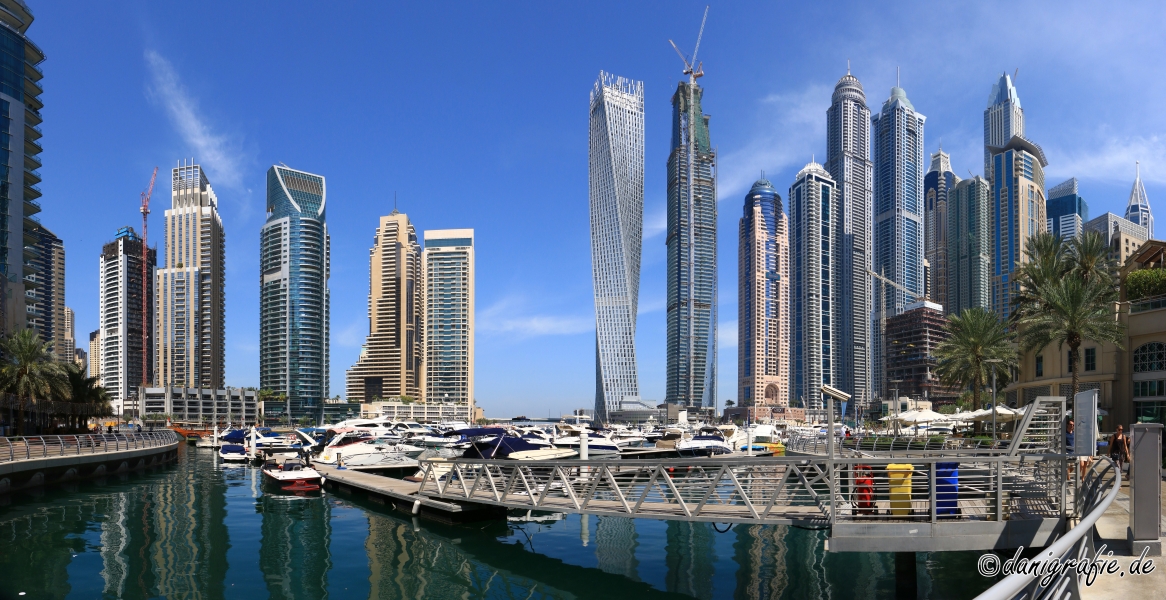 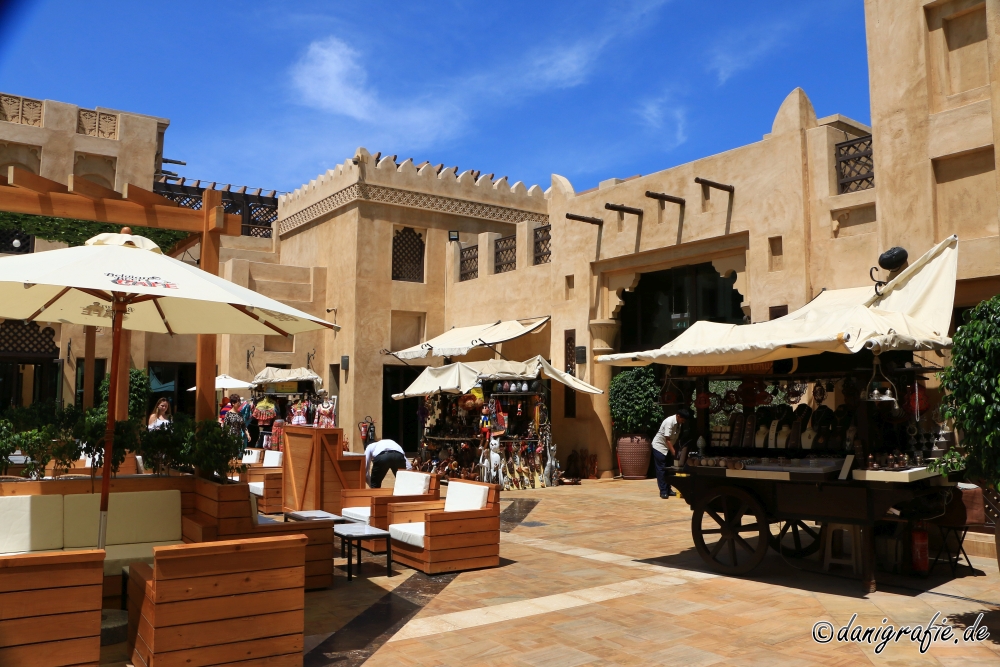 Of course “The Dubai Mall” as well as the visiting platform in the 124 & 125 floor of the “Burj Khalifa” shouldn’t be missed.
There’s also the opportunity to visit the “VIP floor” on the 148. floor – but those tickets are of course more expensive than the common tickets.
It’s highly recommended to book the tickets for “Burj Khalifa” already in advance several weeks before visiting.

We had around 5hrs sparetime to enjoy the great view from the Burj Khalifa and exploring the impressive shopping mall.
The program included also the visit of the “Dubai Aquarium” and the “Underwater Zoo”. 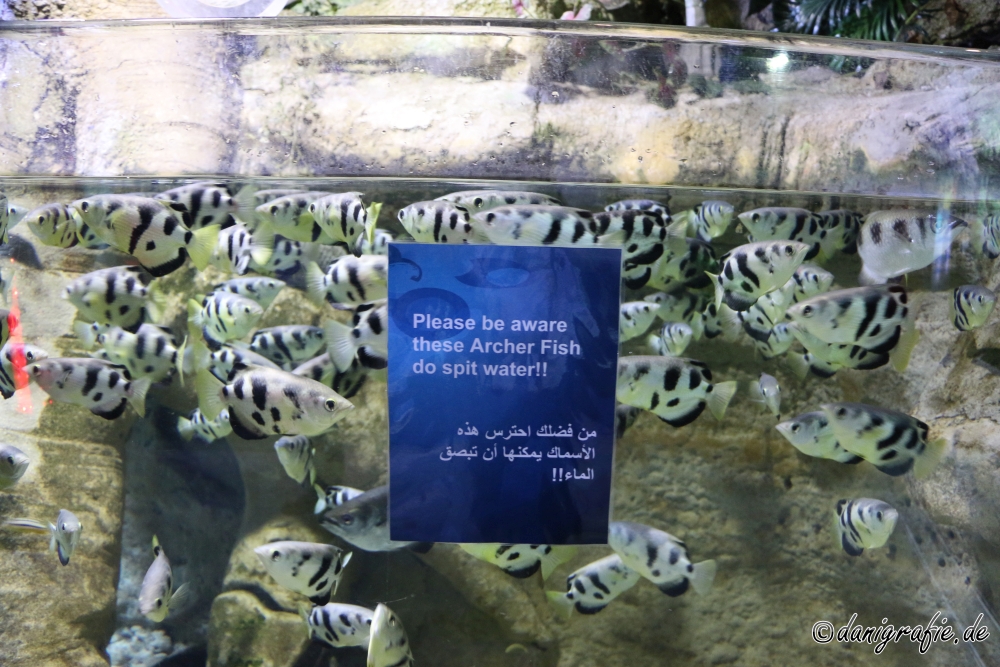 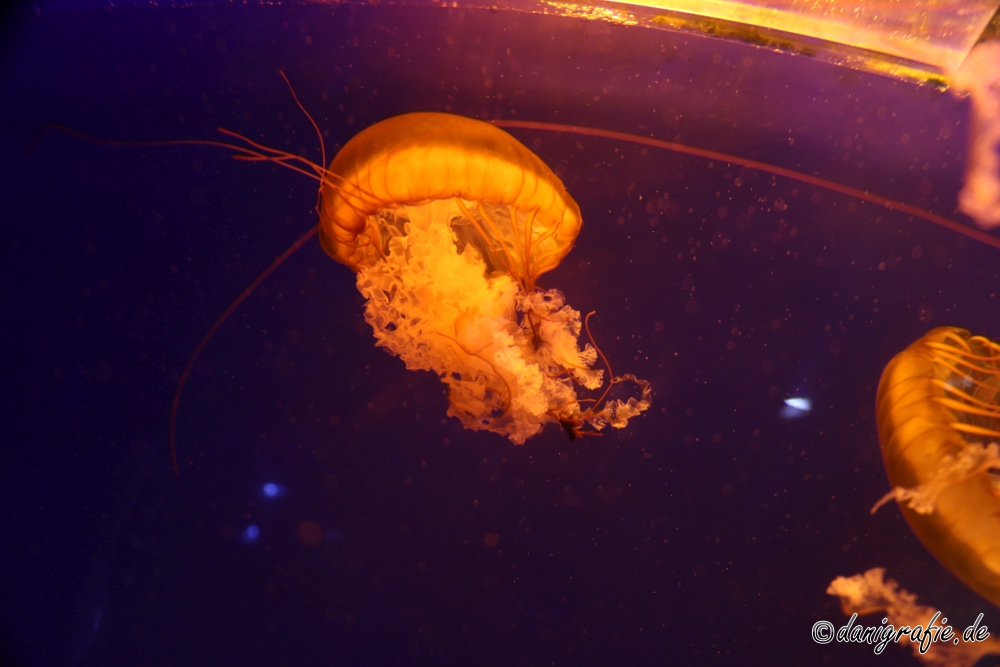 After our stay at the “Dubai Aquarium” and the “Underwater Zoo” we went upwards to the visitor floor  by a very fast elevator.
From that platform you’ve an amazing overview of Downtown Dubai. 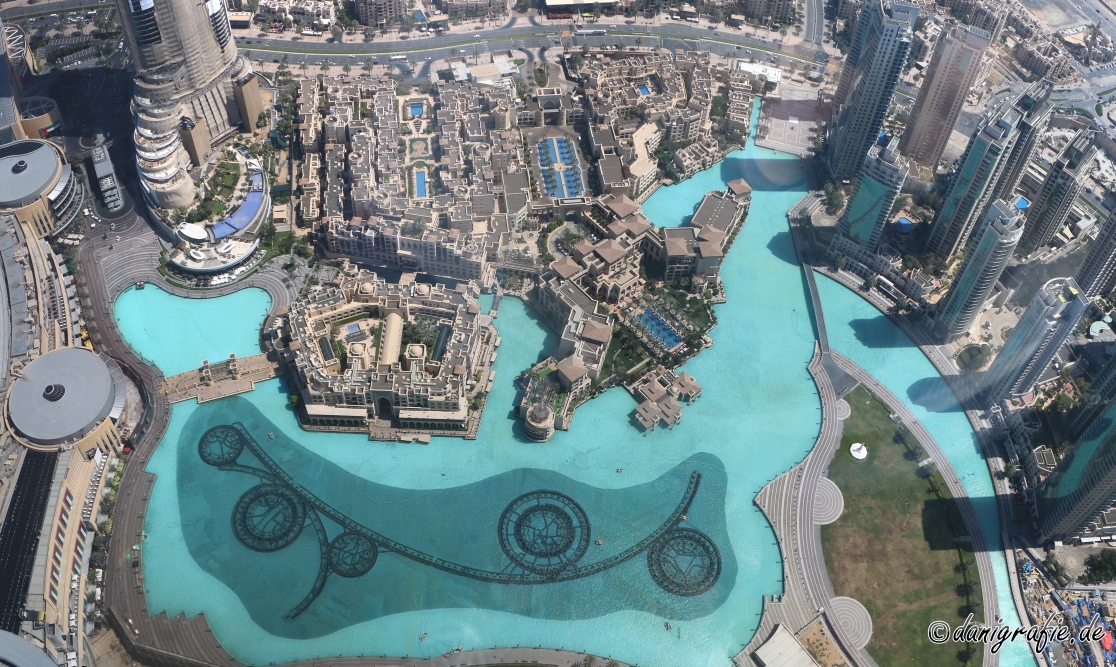 At the end of the day we visited the “Dubain Fountain” with the coloured lighted “Burj Khalifa” in the background.
Afterwards, the shuttle bus turned us back to the village.
As I filmed the fountain, I not took any photos of it.
But on the next day, I took some photos.

In general, this tour is not recommendable.
While the tour, I expected to get some information about Dubai and the Emirates.
But as our guide explained in German (better call it “Indian German” which was hard to understand) and also in a kind of English, so a lot of information gone lost while he explained.
Fortunately, each of us also understood the English parts, so we’ve been able to get all his information.

On Wednesday our tourist guide visited the village to give us information about the big range of activities.
So we planned to explore the nearby surroundings again.
But spontaneously we booked the city trip to Dubai because it was already included in the price.

The trip started after lunch, so we were skeptical about this tour.
We expected a quick tour with visiting the most popular toursit hotspots only.
And after the big bus arrived, we all felt confirmed in our expections.

But right after starting travelling to Dubai, we all had been surprised:
Our tour guide – an Egyptian guy – spoke in very well German and gave us a lot of information and details about Dubai and the Emirates. 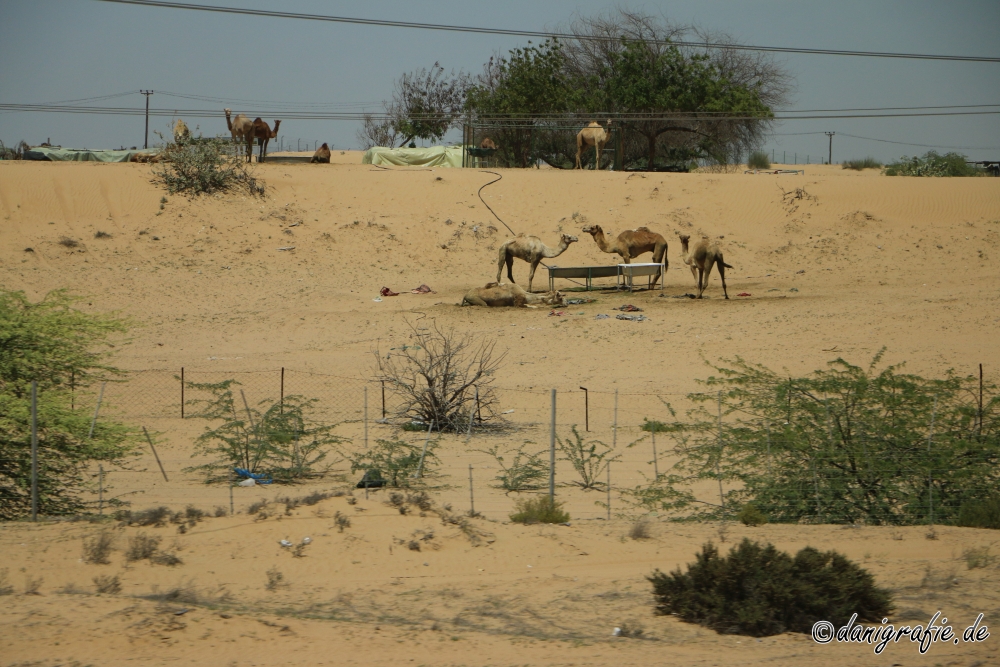 After arriving at Dubai, we not took the direct main road to the Downtow Dubai but our guide showed us e.g. the “Dubai Creek” which means the old town of Dubai and further less unknow places.

The first photo stop was nearby the “Burj al Arab”. 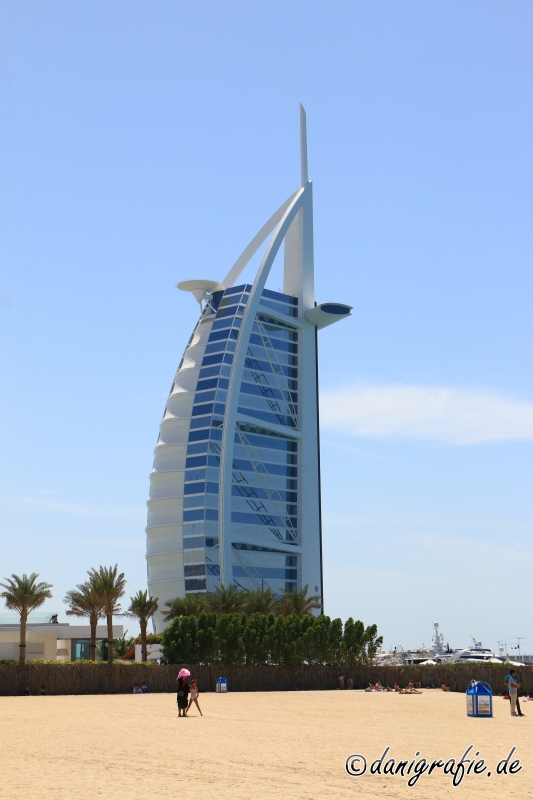 We continued the tour to the palm island called “Palm Jumeirah” where the famous Atlantis hotel is based.
But as it’s a hotel for VIPs and other rich people, the “common people” only can look through bushes and fences.
Our guide also drove onto the island, but still no good spot to see the whole hotel.
Parking or stopping is highly restricted – only for VIPs….

In the early evening, our tour stopped also at the “Dubai Mall” where we had around 3hrs spare time before the tour continued.

We walked through the mall again and shops those price levels are definitely much higher than our earnings are.
For example we saw at “Swarowski” tiger covered with little crystals for more than 18,000 USD – just for a decorative piece. 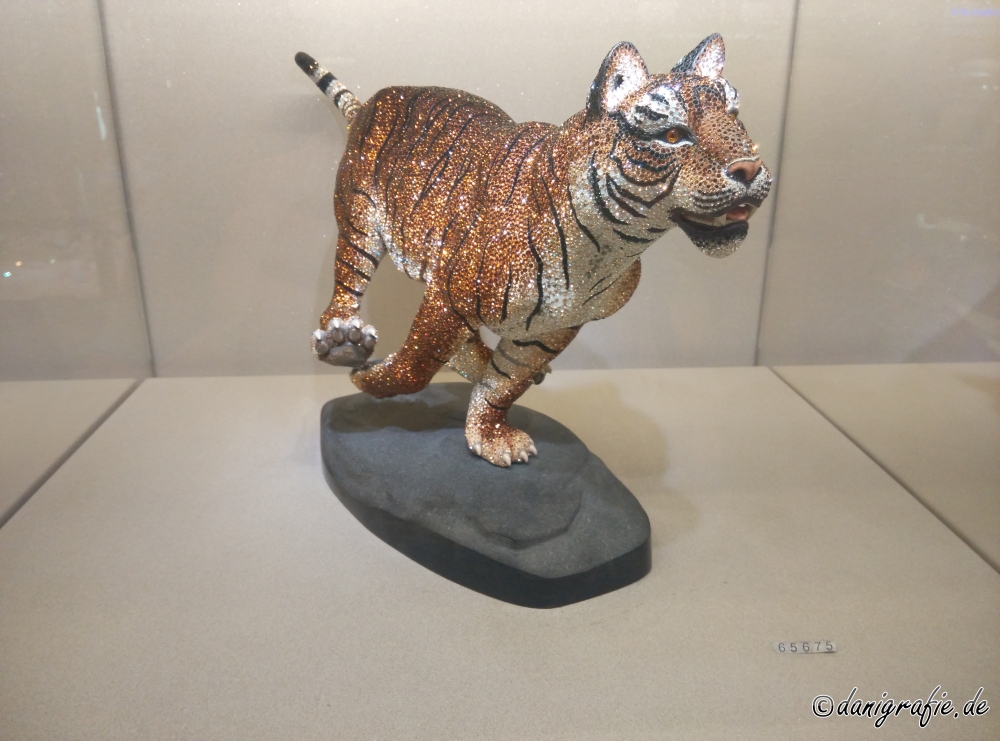 When it got dark, we turned back to the “Dubai Fountain” because the “Burj Khalifa” as well as the Fountain turned into a impressive mixture of water, sound and light show. 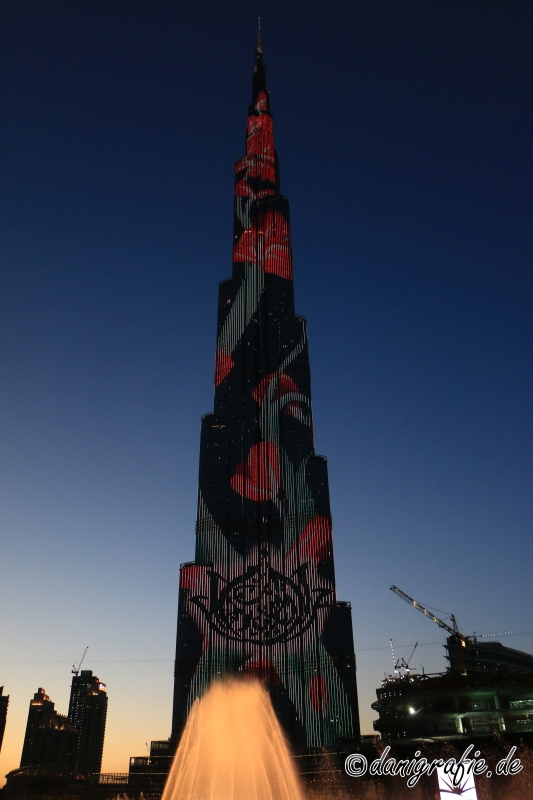 To celebrate the end of the day, we had dinner at a ship while it drove outside Dubai to see the lighted skyline of Dubai. 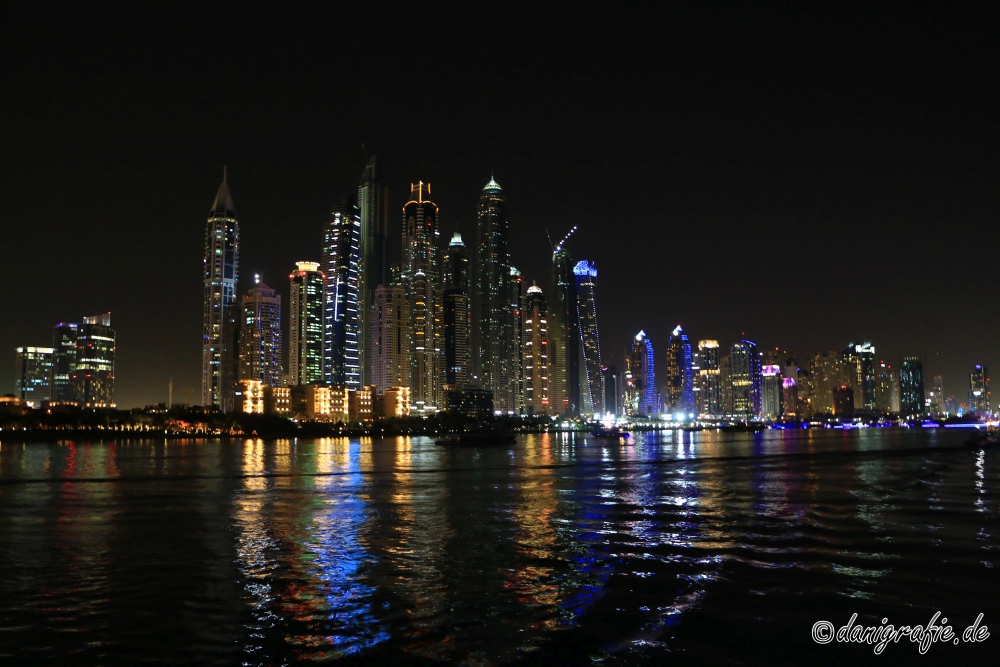 One of the highlights of this Emirates trip was the dessert safari on Thursday with the afterwards buffet in a reconstructed Bedouin camp.

Right after lunch, our driver picked us up at our resort.
Before the tour through the dessert, we met at an assembly point to meet other participants and prepare the truck for the dessert trip.

After this break we drove into the dessert for a photo stop.
While the break, some further trucks came to this place.
Around 20 minutes later, the rough trip through the dunes was ready to start! 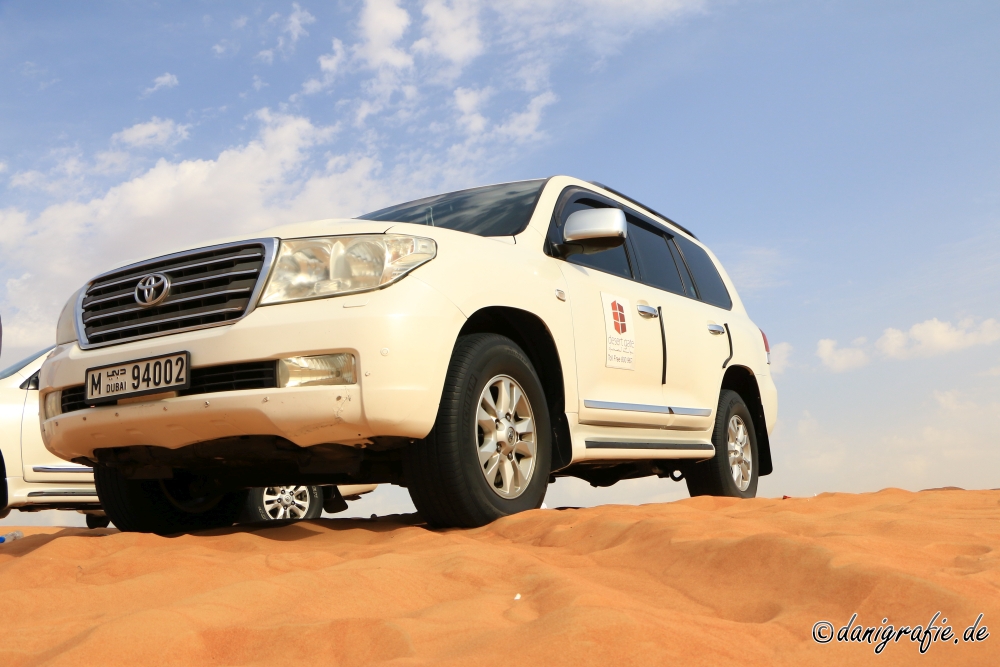 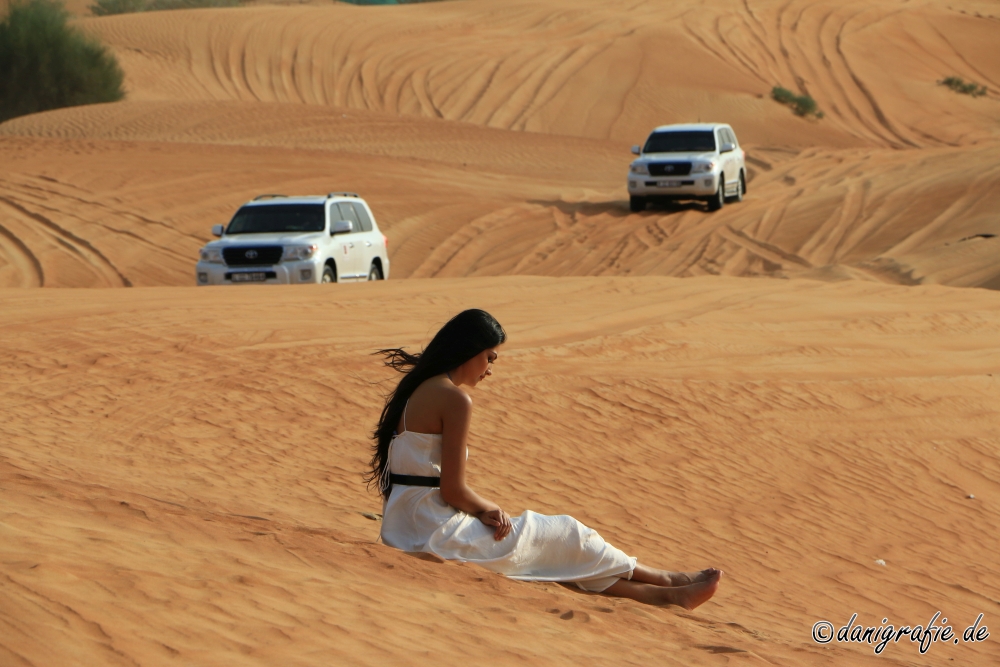 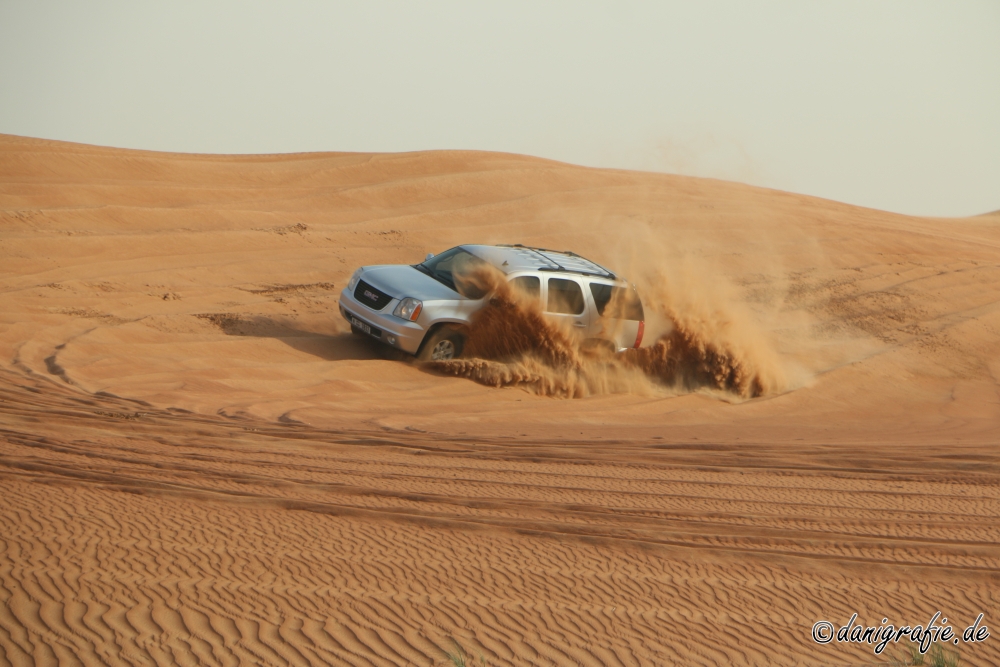 This crazy ride took around 1hr before we had another short break because the cars must be prepared for driving onto the roads again – e.g. refill the air of the wheels.
While the cars had been prepared, we explored the nearby area and took photos.
Around 15 minutes later, we started the way to the Bedouin camp.
At the camp we had a great, traditional dinner with a little Arabian show – e.g. belly dancers or camel riding. 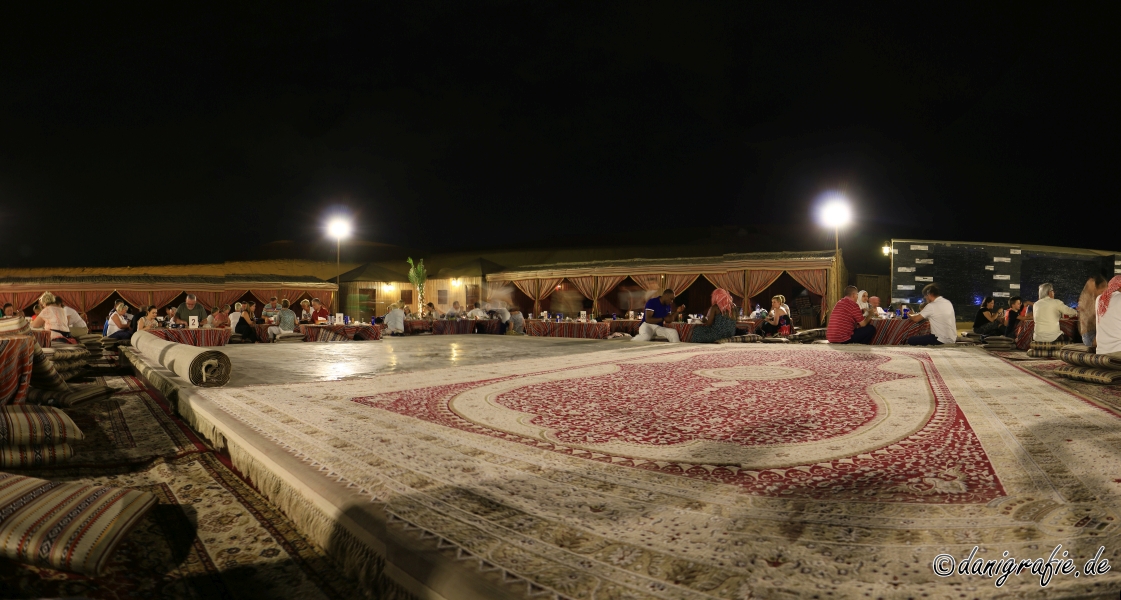 The last day of our tight program was Friday.
For this day we booked a daytrip to the nearby emirate “Oman”.
Before the trip started, our guide refuelled the minivan – approx. 50 liters for less than 20 USD.
Either you refuel your car with 50 liters – or you can have for the same price one liter beer. 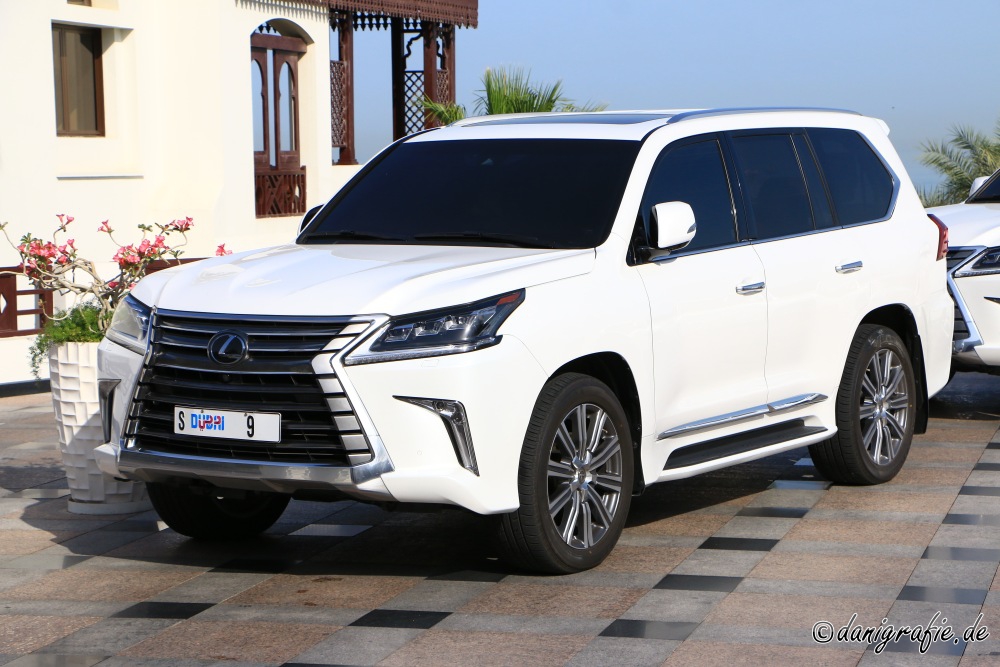 Lexus from the Sheik of Dubai’s fleet 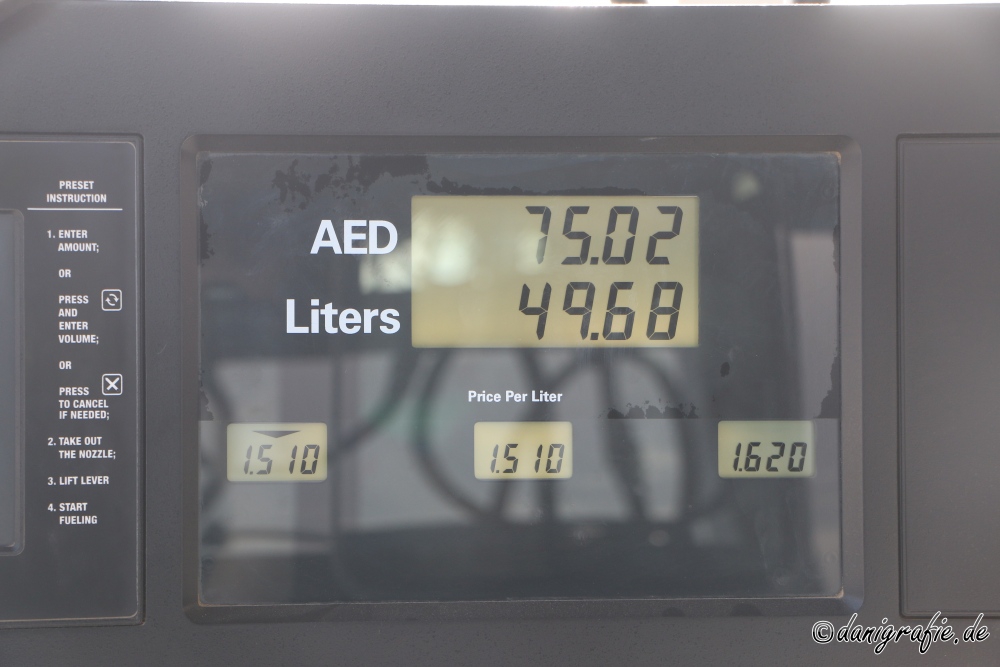 Around 2hrs later we passed the city Dibba.
This city is special as one part belongs to the emirate Oman.
Furthermore, other parts of this city belongs to the emirates “Fujairah” and “Sharjah”.
Last named emirate is more than 100km away from the sharjahian district of this city, so this city have separate licence office, administration and further public authority buildings only for the people who are living in the sharjahian district of the city.

In the middle of this separated city is the border to the emirate Oman.
Right after passing the border we arrived at our tour boat.
The boat trip stopped around 1hr after leaving the harbour in a little bay where we were able to swin and skin-diving.
A short time later, a speedboat arrived at the bay which brought interested people into a small cave – but the cave wasn’t really interesting. 🙁

After the extensive recreating in the bay we had lunch.
But as the wind came up it was a little difficult with the lunch as everything has been blown away all over the boat.
While shipping northwards to another bay the wind abated.
Full of expectations we arrived at the bay – but because of the hughe count of jellyfishes our captain decided to return back to the home port.

During the returning the crew sold a lot of different souveniers – from fragrant oils and plush camels up to different silk scarves. 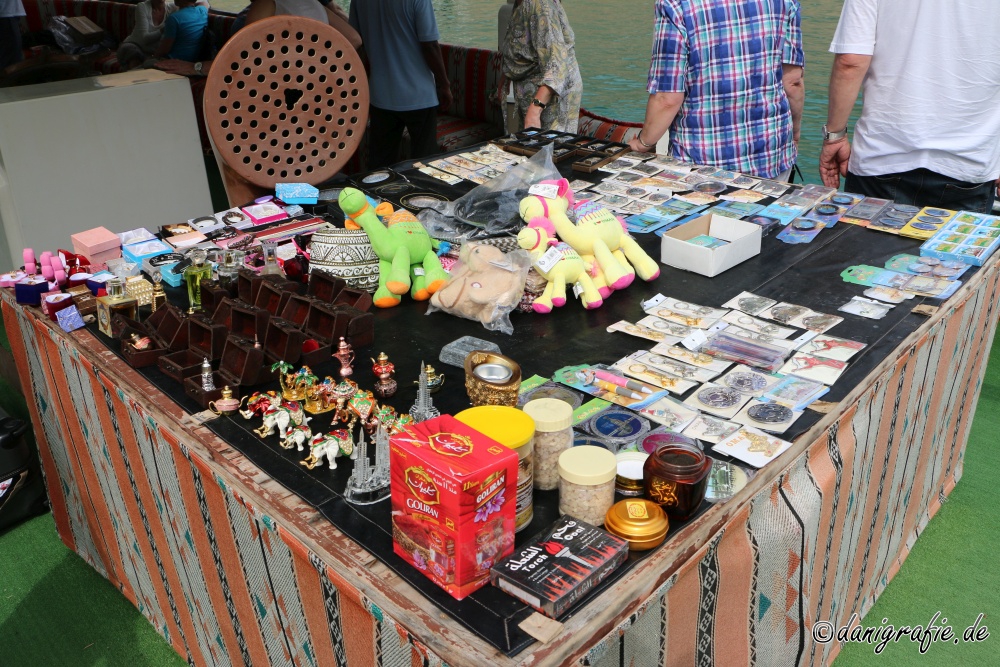 As the holidays ended step by step and we not have been at the beach before, we had to change this matter immediately on Saturday.

Before the beach, we had to drive again to the shopping mall by taxi.
Afterwards we took the shuttle bus to reach the beach which was only 500m away from our village.
We relaxed at the beach until the sunset. 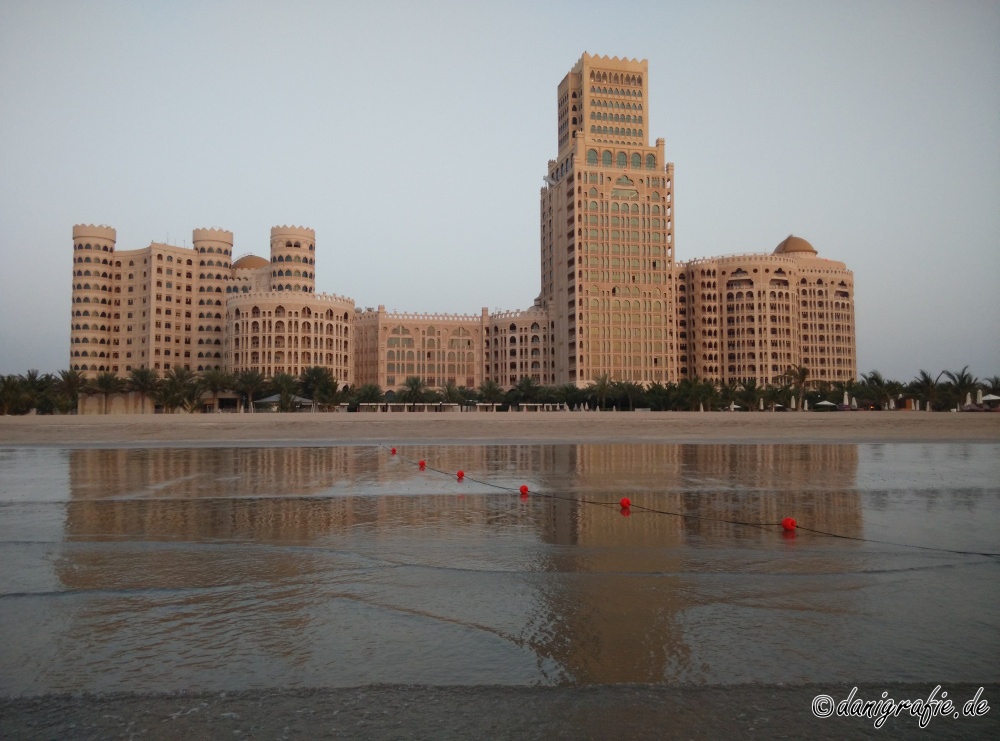 Minutes before midnight I found out that I never made any night shots.
Without further ado, I picked up my equipment and walked through the village area and nearby golf park looking for interesting places.
My short night walk was finished around 1hr. later. 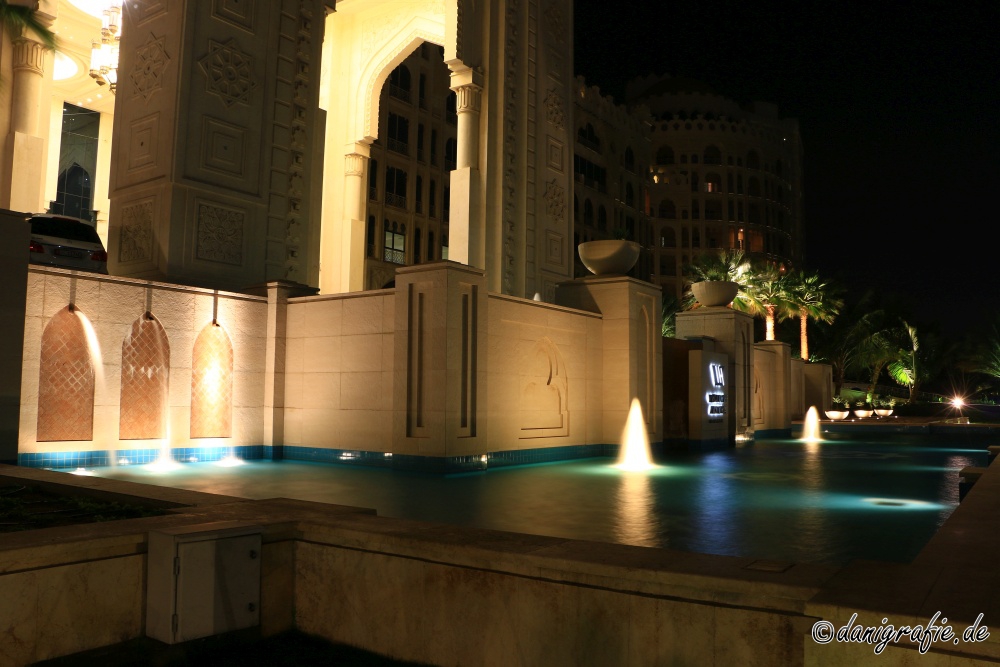 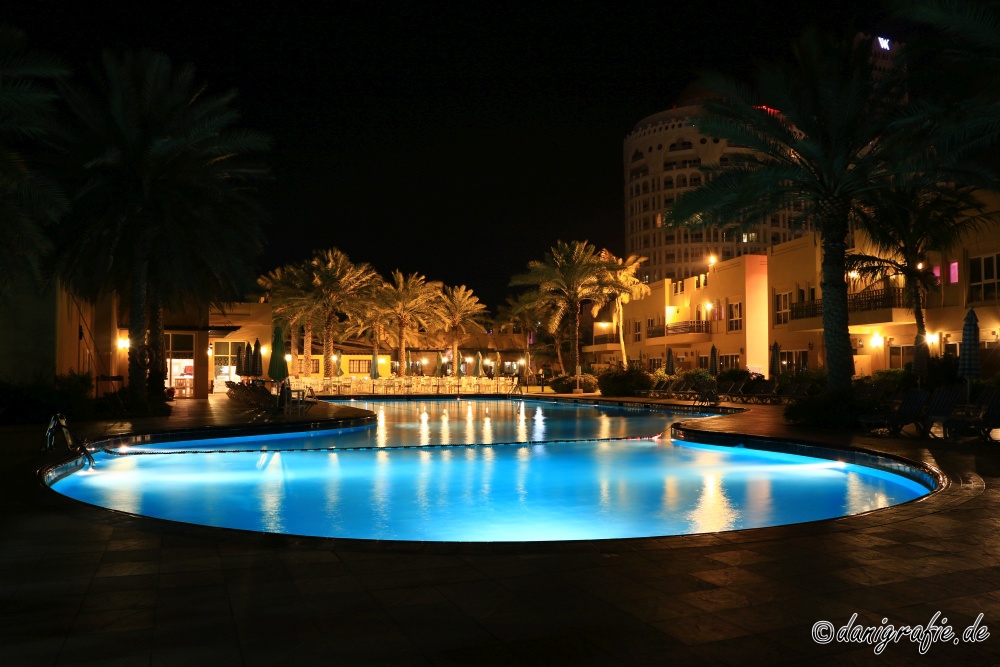 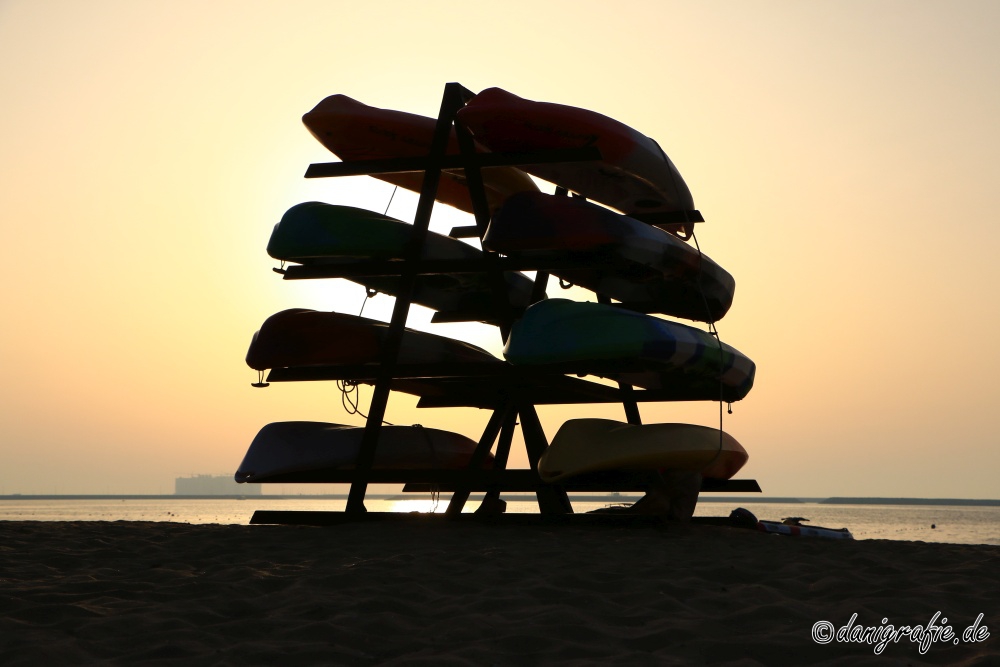 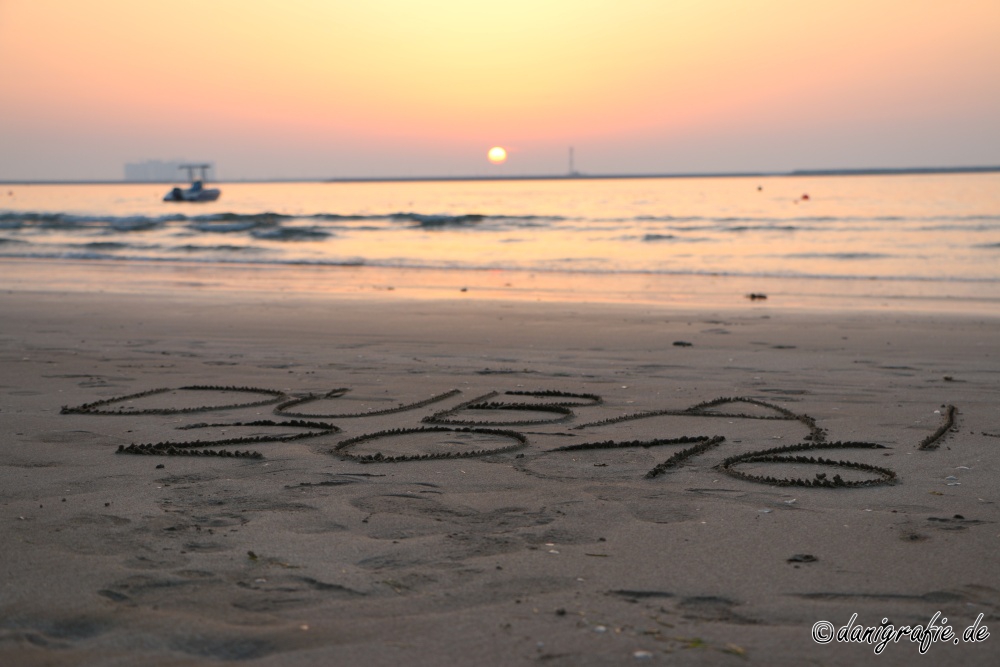 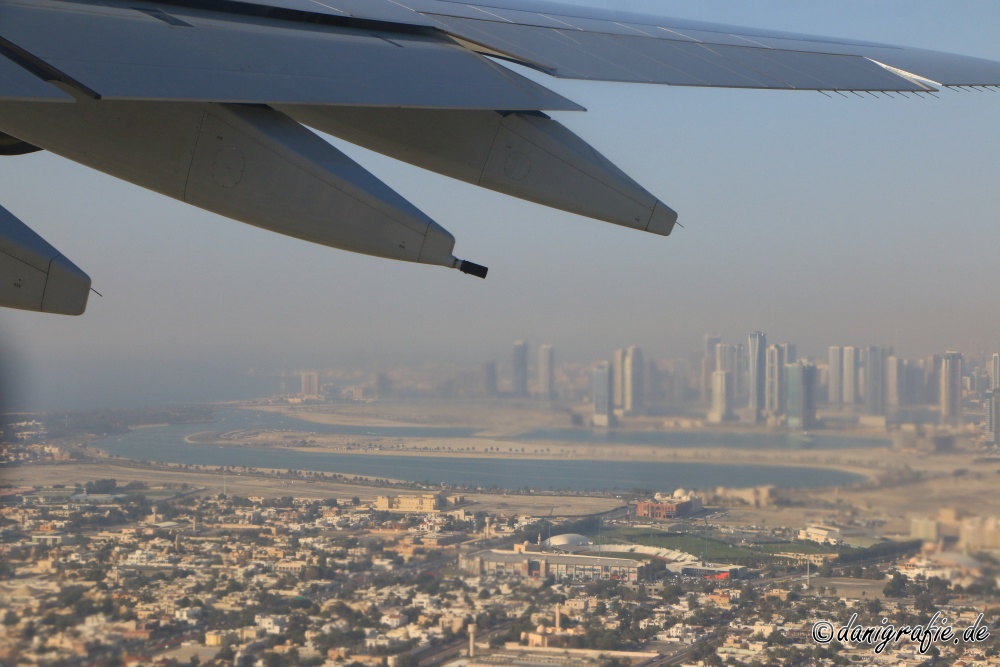 one final view at Dubai 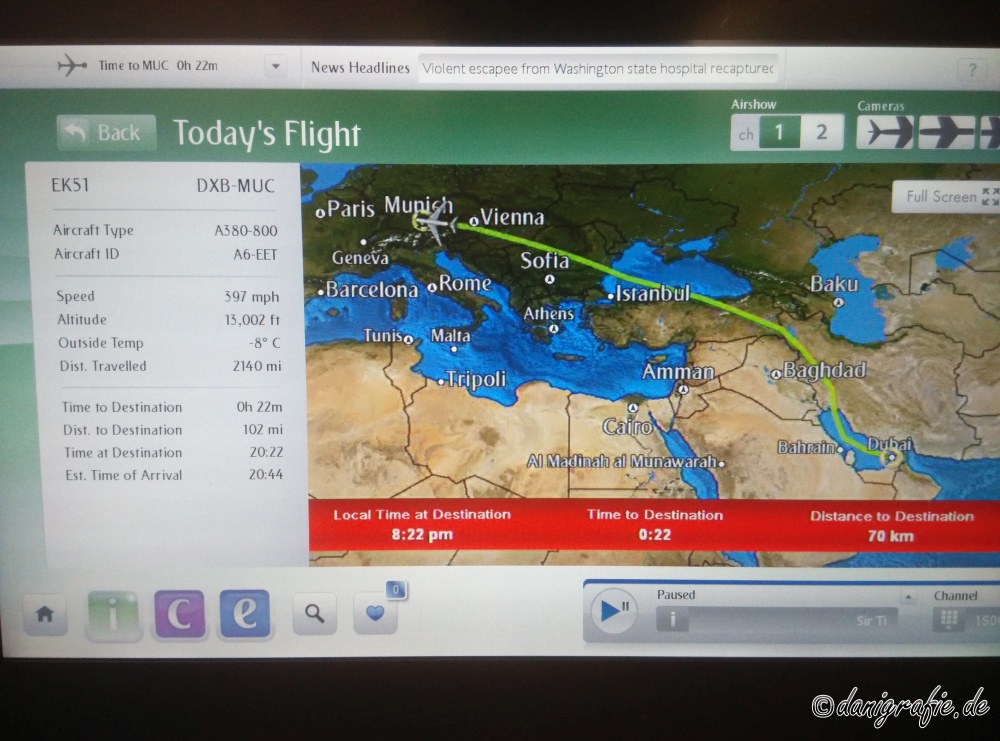 Right before landing at Munich Airport

A selection of all the taken photos during my stay in the Emirates   is in this folder available.