Early January, we spontaneously decided to drive to Innsbruck while the weekend from January 13 to 15, 2017.
We stayed at a campground on the Lake Natters which is close to Innsbruck.

The Lake Natters is located around 15mins in the southwest of Innsbruck.
As the average depth of the lake is around 1.3m, it’s a very popular swimming lake for more than 80 years.

The idea of this trip was born because a part of the family already stayed at the holiday paradise of Lake Natters.
So why not to stay there in winter, too?
One advantage was, that the prices while this season have been pretty cheap.
And the risk of an overbooked campground was pretty low because of winter season.

The holiday paradise offers the classical camping in a tent or camper.
You can also book a room or apartment – or a mobile home made of wood.
And finally they also have some crazy accomodations like sleeping barrels, safari lodge tents and wooden lodges.

Further details are available at the website of the “holiday paradise of Lake Natters (German only)“.

In the forenoon we started the trip of around 200km to the destination.
As the accomodation was ready for occupation not before 4pm, we decided to have a break at Innsbruck.
Fortunately we had no traffic blockings and so we arrived Innsbruck at noon.
Most of the time we went shopping in a shopping center in the town center of Innsbruck.

While the later afternoon we finished the last 15km until the final destination.
As it snowed the days before, the streets have been covered by the snow.
And the fact that the navigation system navigated us through a little village built on a slope made the situation not really better.
As slow as possible along one-way streets and between the houses, we turned back to the main street for the holiday paradise.

Finally the one thing we wanted to do was cooking – but it seemed that the front desk girl forgot to give us the key for the locker with all the cookware.
Unfortunately, the reception desk has been closed minutes ago.
But we found a phone number of the janitor and he was able to help us to cook. 🙂

This day has ended with some night shots in the iciness. 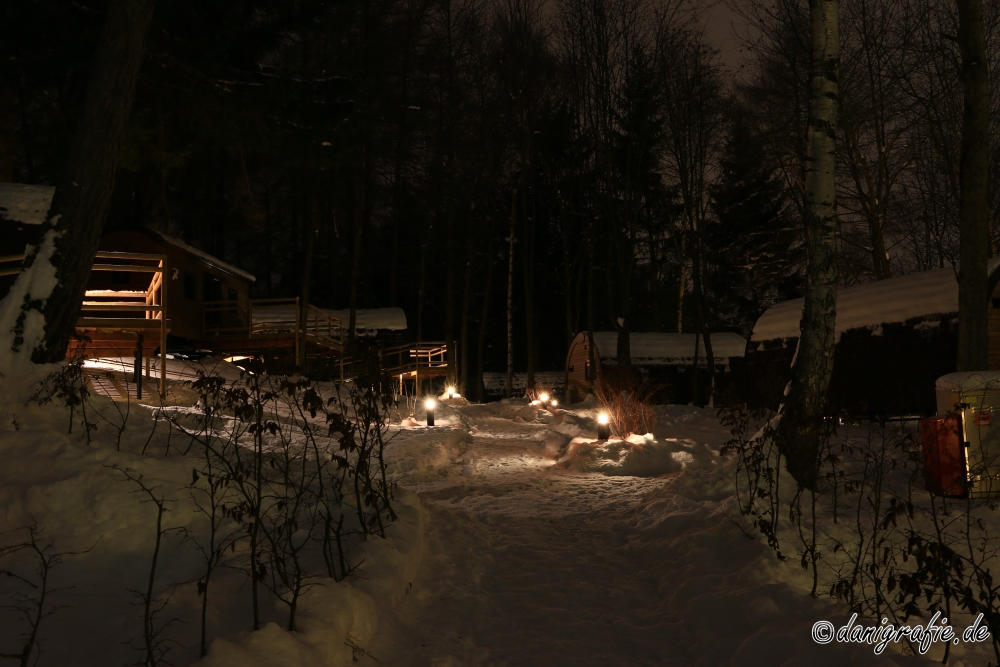 Over night to Saturday, a lot of snow has fallen again.
The motivation to drive downwards to Innsbruck was pretty low.
We had to expect that the streets are covered by snow again – as well as the parking fees at Innsbruck are not really cheap.
Thankfully we got a kind of bus ticket while our check-in on the day before.
With the ticket we got the permission to use the transit bus to Innsbruck for free!
So let’s go straight to the bus stop.

After arriving at Innsbruck, we explored the city while blowing snow. 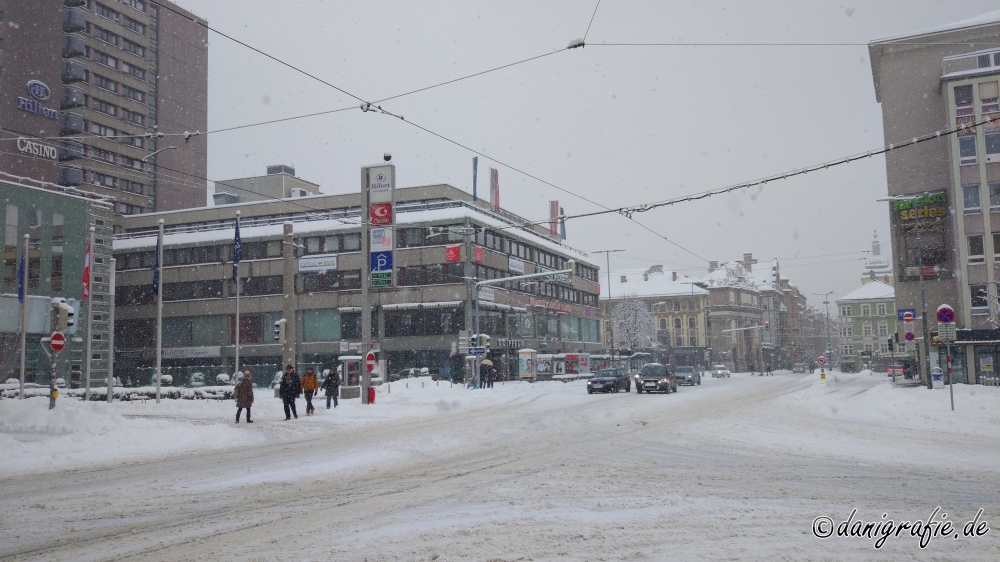 Amongst others we tried to find a restaurant for lunch, which was pretty easy.

As it was Saturday, we wanted to continue shopping – as well some ingredients for cooking.
While going back to the shopping center from the previous day, we passed a smaller shopping mall.
This mall was equipped with an elevator up to the 8th floor.
From up there we had a great view above the city of Innsbruck – in spite of a lot of clouds and fog. 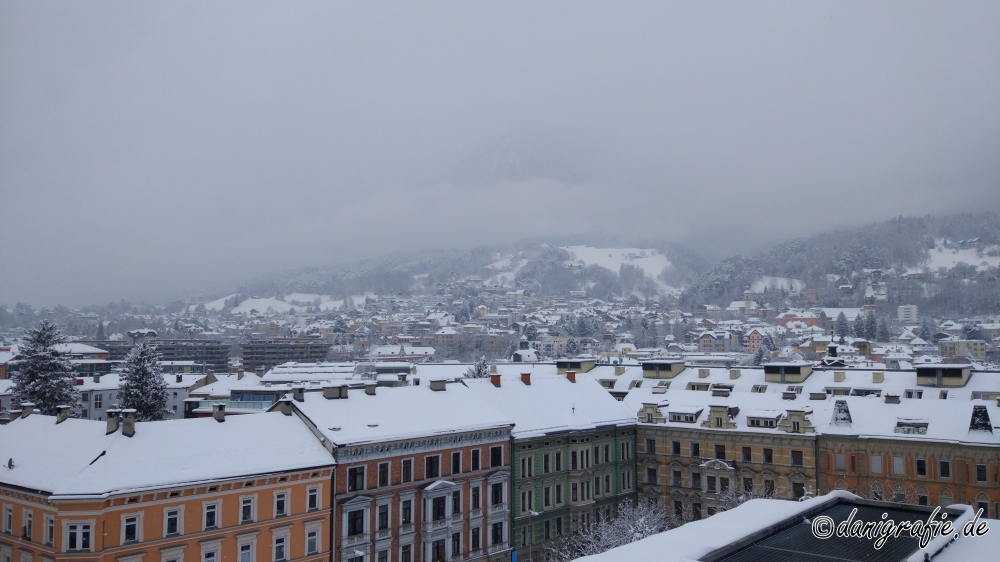 Back in our “Wooden Lodge” we started cooking.
Meanwhile I took some night shots again as I not liked the photos from the day before.
Another reason was the fact that the sky was not as much covered by clouds as on Friday. 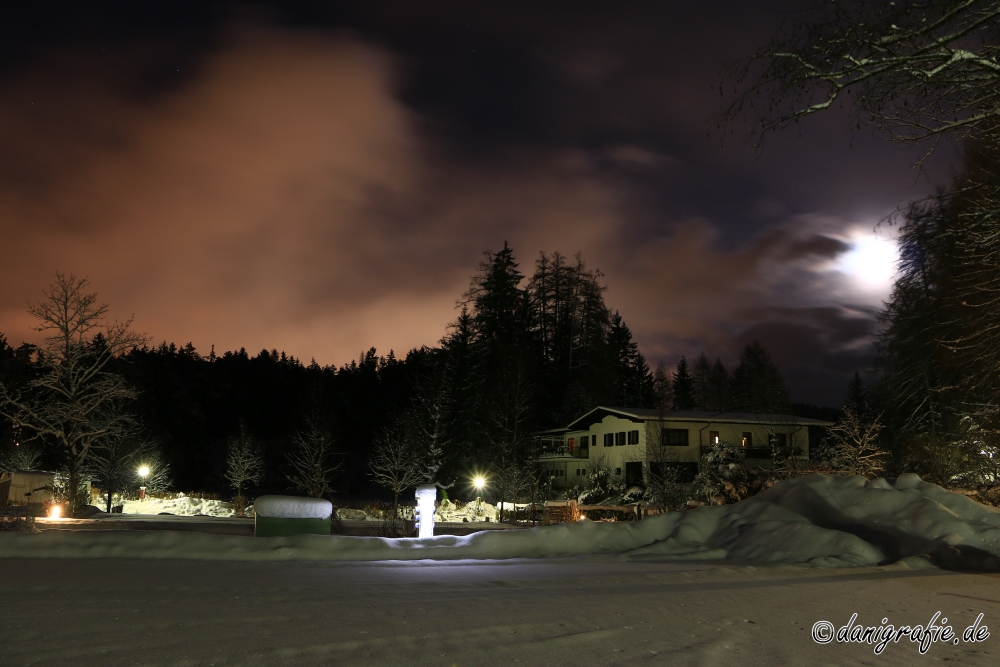 For some shots I had to go cross-country through the snow.
During the time I not recognized the coldness very much, but I think it was woth its efforts. 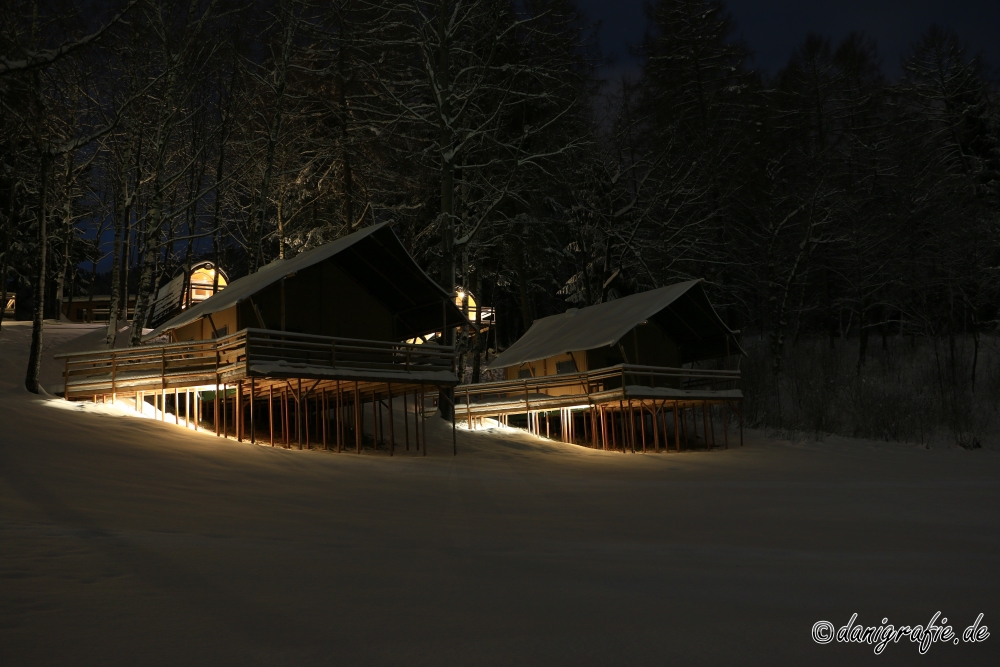 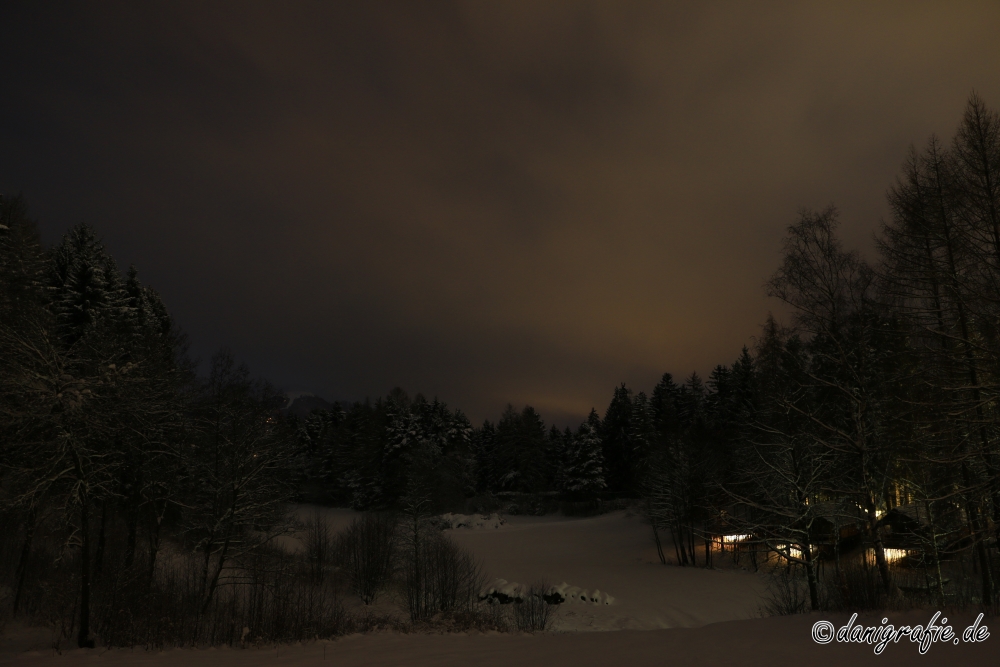 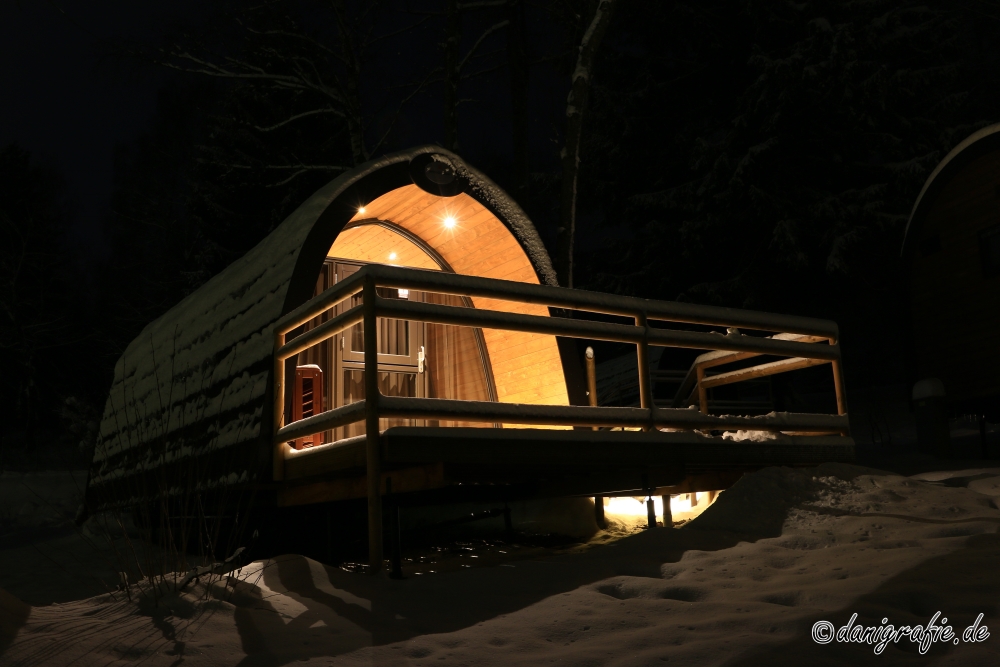 One of the wooden lodges which we have booked, too

This Sunday mainly was about packing and returning back homewards.
While our way to the highway, we made a short break at the famous ski-jump called “Bergisel”. 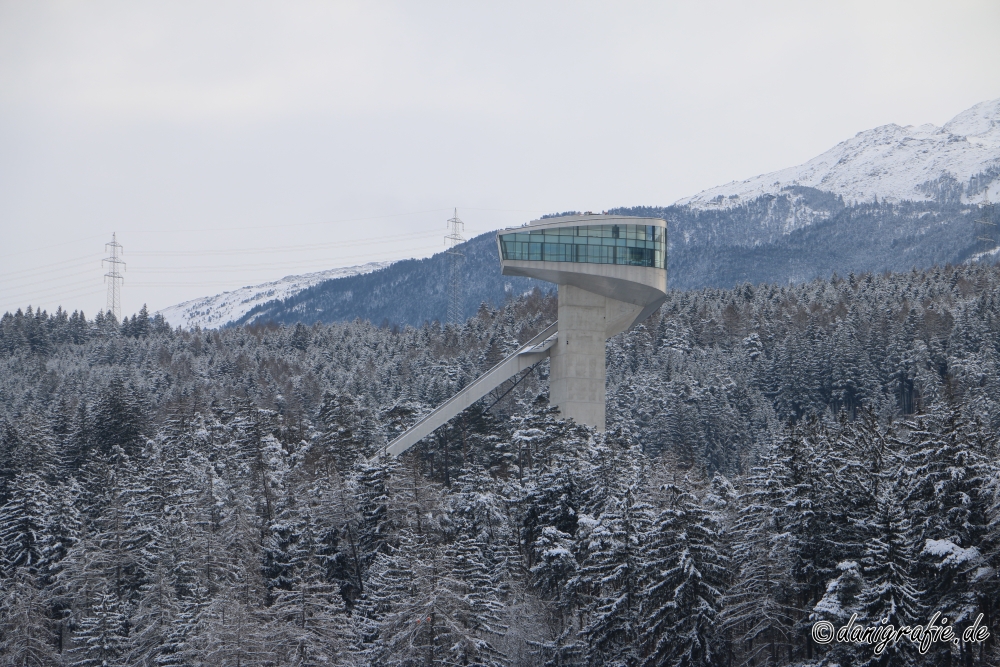 Originally we wanted to have a view over Innsbruck – but the prices for entering the ski-jump have rejected this plan.
Alternatively we found another place – for free – to have a look over Innsbruck.
Afterwards we drove to the highway in direction to Munich/Salzburg. 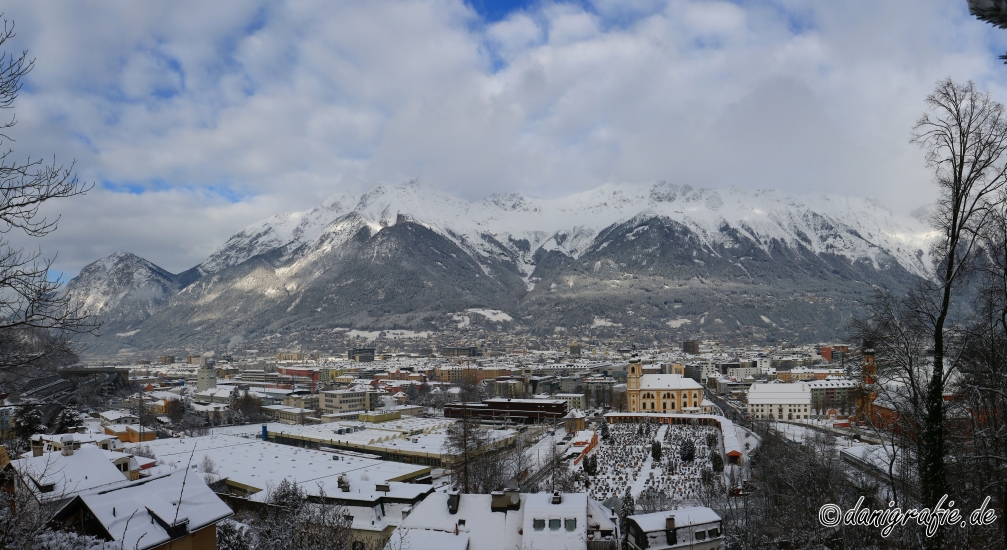 view of Innsbruck from the bottom of “Bergisel”

All the photos are available in the gallery as normal.