The Großglockner has been a destination for the whole family for many years.
After many years of postponing the trip again and again to “later”, the decision was made at short notice to finally drive to the Großglockner on this day.

All photos of the Großglockner can be found – as usual – in a seperate archive.

About 1.5 hours of drive by car we reached the beginning of the Großglockner High Alpine Road in Ferleiten.
Since it was only shortly after 9, we had – apart from cyclists – free way on the pass road.

In a hairpin bend we made a short stop to take pictures and cool down the car – safe is safe.
The clouds and the fog were obviously not yet in the mood to give us a clear view of the mountains. 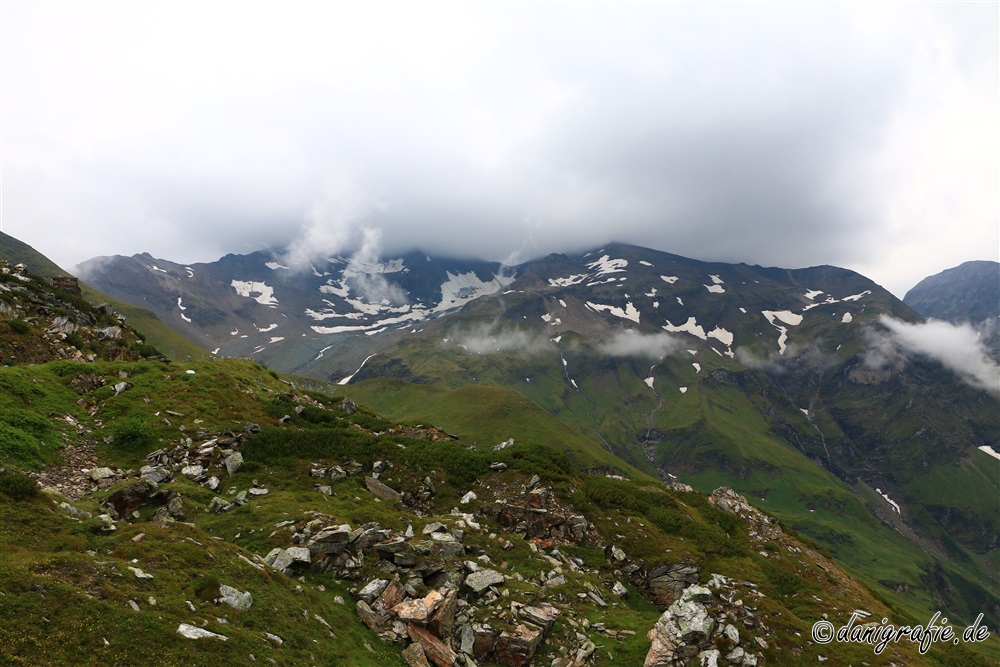 For those interested in culture there are many information points in this region where you can find out about the history of the Grossglockner massif.
But our main focus was on the – hopefully still existing – glacier at the Großglockner: the so-called “Pasterze”.

One hour after passing the toll station we reached the restaurant Fuschertörl.
But not for taking a break.
From there a narrow and cobbled “mountain road” leads up to the Edelweißspitze at 2571m and thus the highest passable point in the Grossglockner massif. 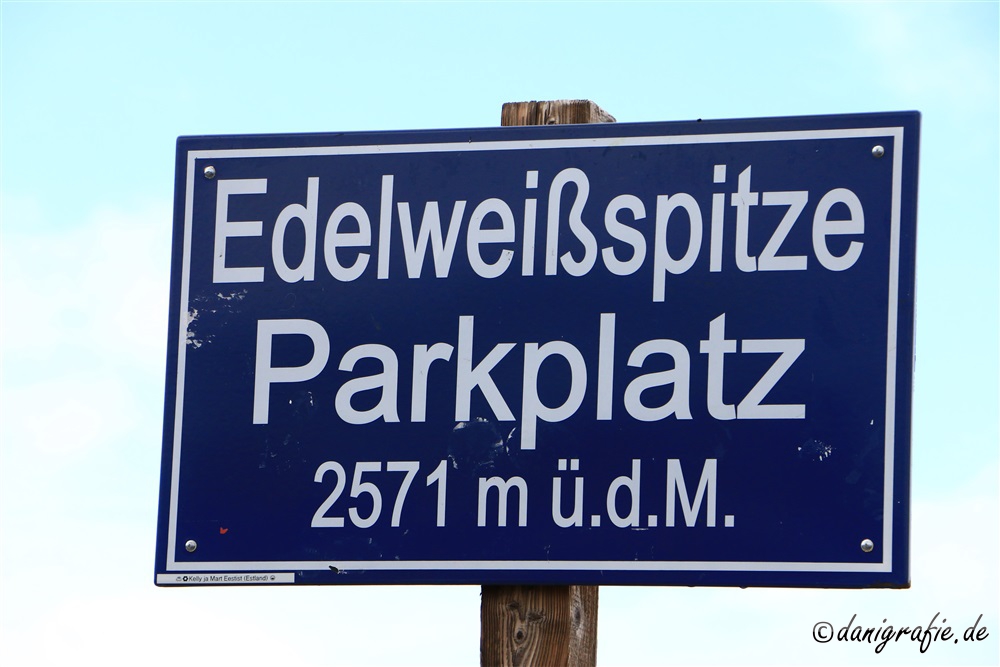 View on some of the 3000m high mountains

Due to the clouds and the resulting wind we did not stay too long on the Edelweißspitze.
Our declared goal was the glacier Pasterze at the foot of the Großglockner.

Since in the mountains – especially with regard to roads – it rarely goes straight ahead, we had to go down again.
From over 2500m first through the Hochtor (border Salzburg-Kärnten) down to 1600m, before we went up again to 2369m.

On these heights, we were crossing some vegetation zones:
From rock deserts over rather stony and mossy regions up to green steep slopes. 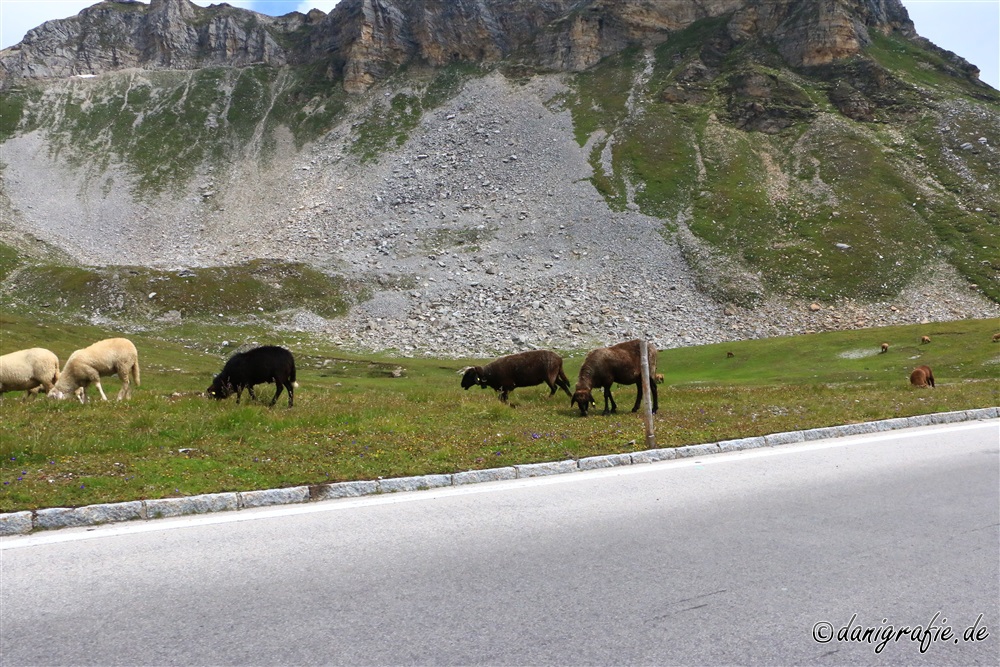 Even sheep run free and graze on over 2.000m

A decayed hut, which nature will re-conquer within a few years.

The “Pasterze” at the Großglockner

About an hour later we finally reached the national park site at 2369m above sea level and thus our destination.
Meanwhile it had become already noon – however, we wanted to admire first the surroundings and inform ourselves a little about the glacier.

For someone who sees this glacier for the first time, a truly impressive view.
You don’t see this every day.
After all, the Pasterze is – according to Wikipedia – currently a glacier about 8km long.

But if someone was here already 10 years ago, you quickly see the shock.
Being shocked about how much mass the glacier has lost in only 10 years.

The melting of the glacier has formed the Sandersee. 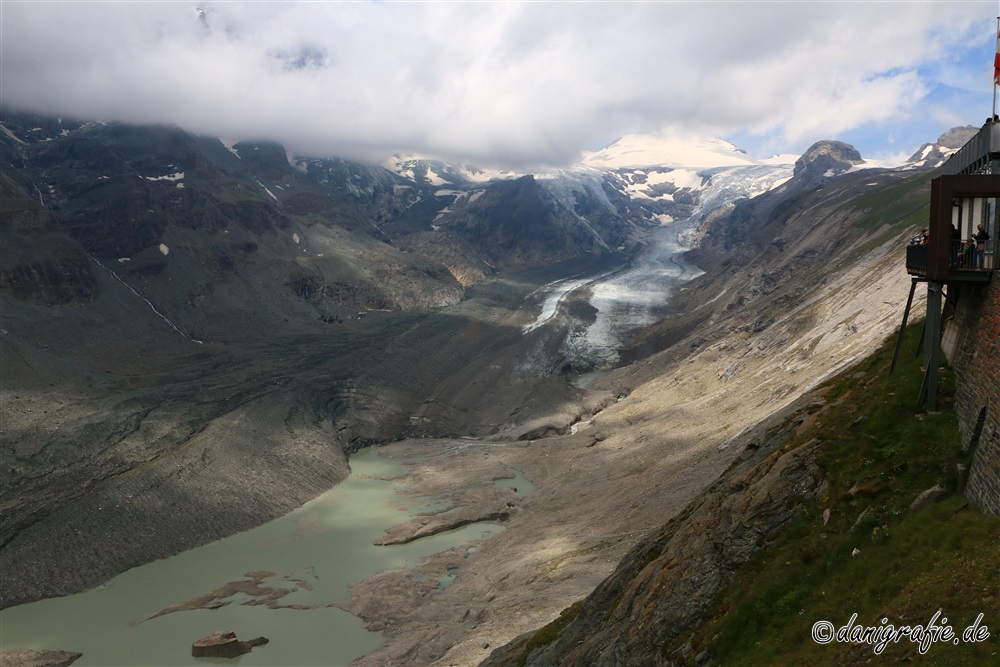 Actually some of us wanted to hike up to the glacier.
However, it was still cloudy and the trail would have taken several hours.
So we went down with the funicular railway. 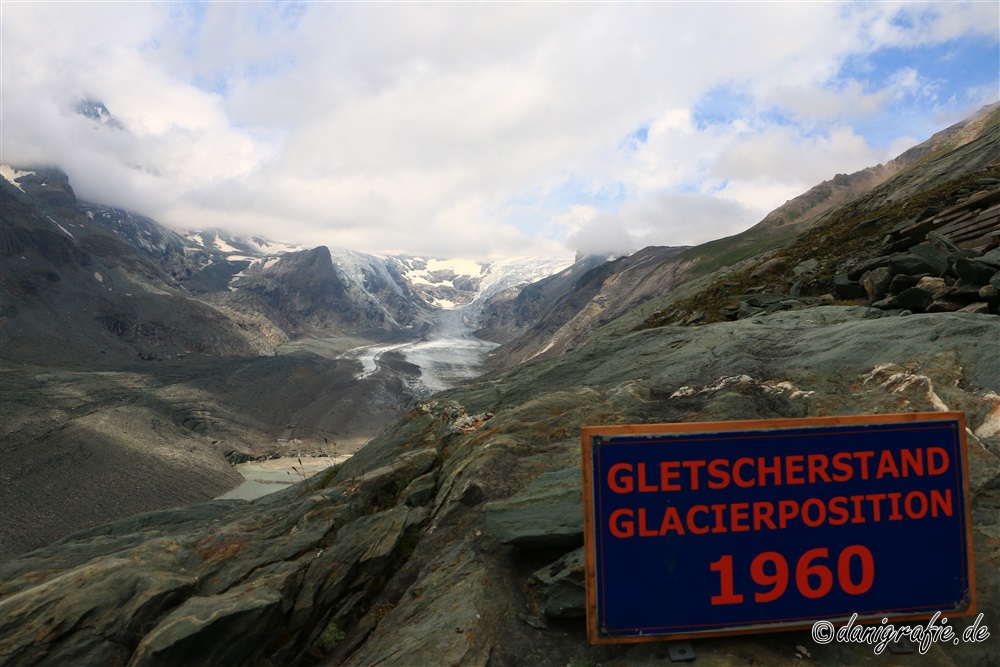 We decided to at least go down to the lake.
On the way to the lake, the height markings of the glacier were always indicated with the year.

Already from above you could see pieces of ice in the lake.
The actual size became only conscious, when we  arrived down at the lake. 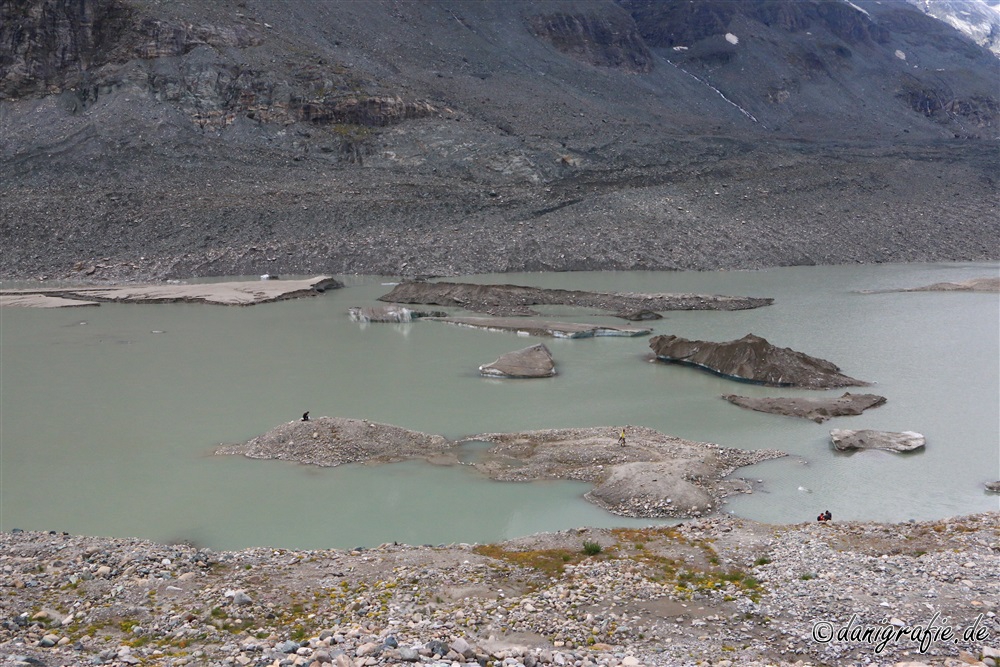 The ice pieces look more like rock.
If you zoom in, however, you will see that the “rock” shimmers bluish and is therefore glacial ice. 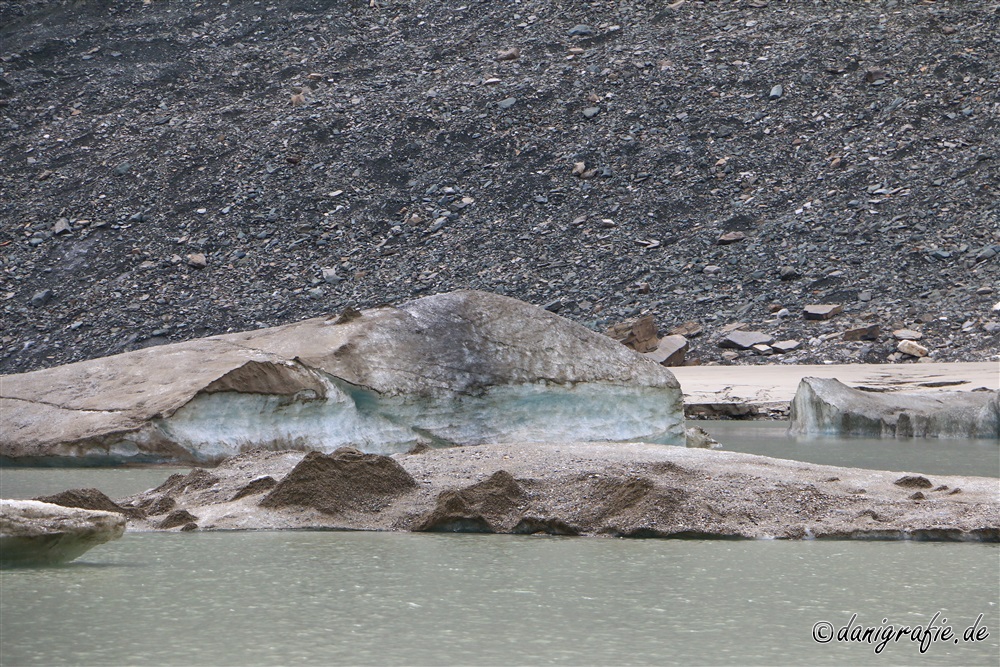 After an “arduous” climb back to the funicular (you should definitely take something to drink with you if you are not fit…) we took the cable car up again.
Finally the time had come for lunch – at 15:00…
Meanwhile we could catch a glimpse of the Großglockner, which was almost always hidden behind the clouds.

But only ALMOST continuously. 😀 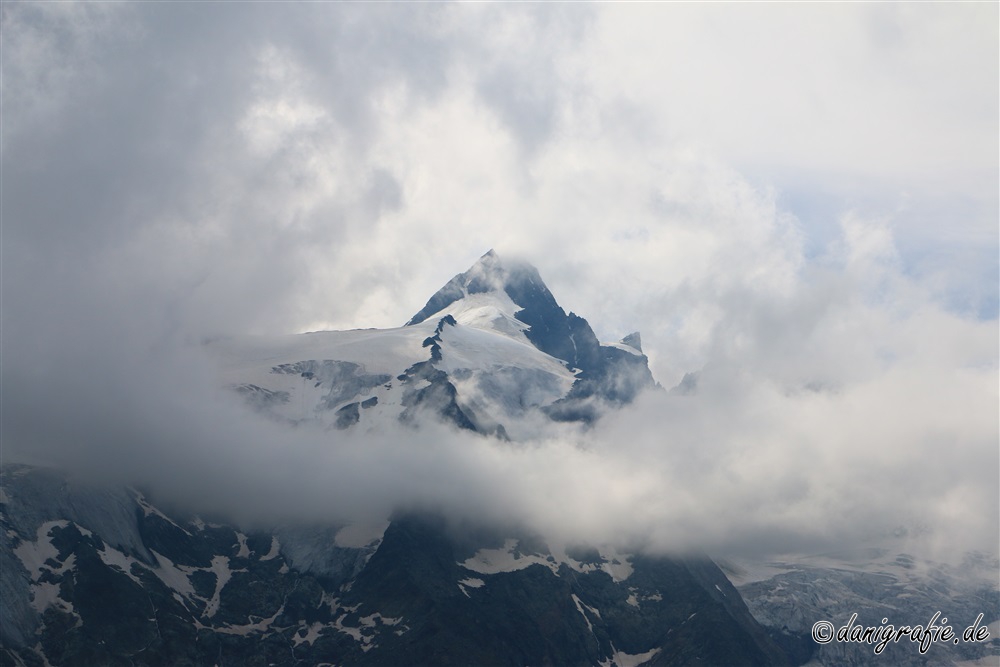 A visit to the souvenir shop was of course not to be missed.
Who knows when you will come back…?

Gradually, however, a question arose that was successfully suppressed for hours:
How do we get home again?
Via the challenging, but shorter route over the Grossglockner High Alpine Road.
Or the easier but much longer way over the motorway?

On the driver’s side it was decided quite quickly to drive over the motorway.
Thus the actual driving time of 2.5h and 150km turned into a distance of 3.5h for 250km.
But it is also a much more material-friendly route, because it only goes only one time downhill – and not afterwards up to 2500m again and then down again.

On the way back we only had a short stop in Heiligenblut before we went towards the hospital on the motorway. 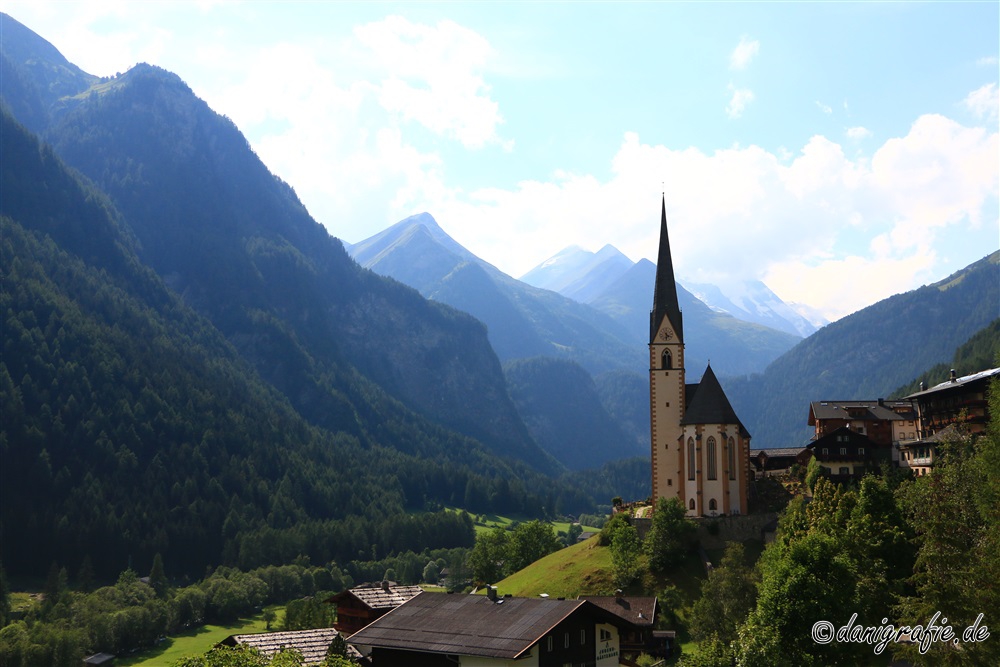