This trip to Berlin was – like the trip to Cavallino – rather a spontaneous decision.
My girlfriend had a long weekend off and I had saved the year over a day or two off. Our previous holidays and short trips all took place abroad. This time we decided to go to Berlin after a long discussion. Within a short time reachable by plane and not nearly as expensive as our other favourite destinations abroad.

Our collected impressions from the long weekend in Berlin can be found here.

Without too much preparation and planning, we then booked a package holiday on the Internet. Since our demands are relatively manageable, the budget was still manageable. Since we flew from Munich, the journey by car was necessary – we didn’t want to rely on the train, because then we probably should have arrived the day before. We parked the car at a parking service provider, where we had already parked at the trip to the Emirates.

The day began with a trip to a parking service provider near Munich Airport. So we could get to Munich Airport relaxed and didn’t have to pay a lot of money for the multi-storey car parks directly at the airport.
The outward flight started at 12:30. Until then, we first made a mistake through Munich Airport, as we were directed to the check-in desk by a display board in front of the security check and then sent back to the security check at the check-in desk, as we were only travelling with hand luggage…. If you would have preferred to get more detailed information in advance…. But now we at least know Terminal 1 by heart. ^^

With a little delay due to an overcrowded airfield in Berlin we reached the airport Berlin Tegel around 14:00. With the bus we continued our journey to Bahnhof Zoo. The last “meters” we took the subway before we reached our hotel after a short walk.

After unpacking and relaxing in the hotel we went back to the Bahnhof Zoo for dinner and a stroll.
Since it was already dark, of course no usable photos with the mobile phone were taken.

On this day we drove through Berlin on our own. Our destination was the Memorial Berlin Wall. This memorial contains a lot of information and ruins from the time of the division of Berlin into East and West. In the truest sense of the word, one undertakes a journey back in time to that time and can imagine – even if only remotely – how everyday life must have been, especially in the border region. 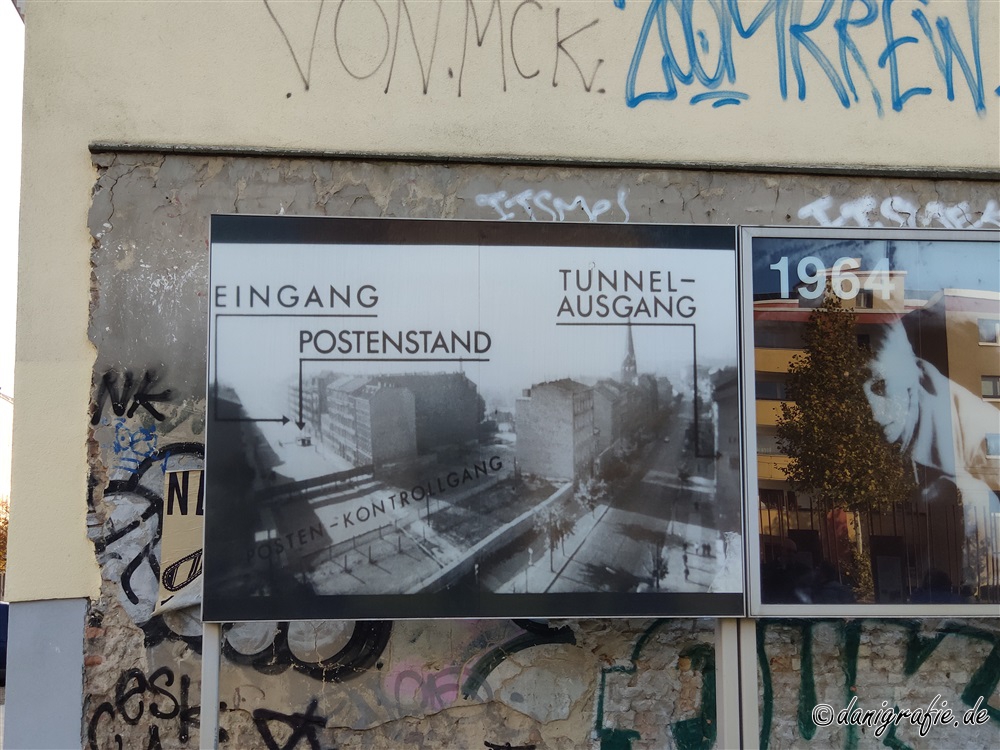 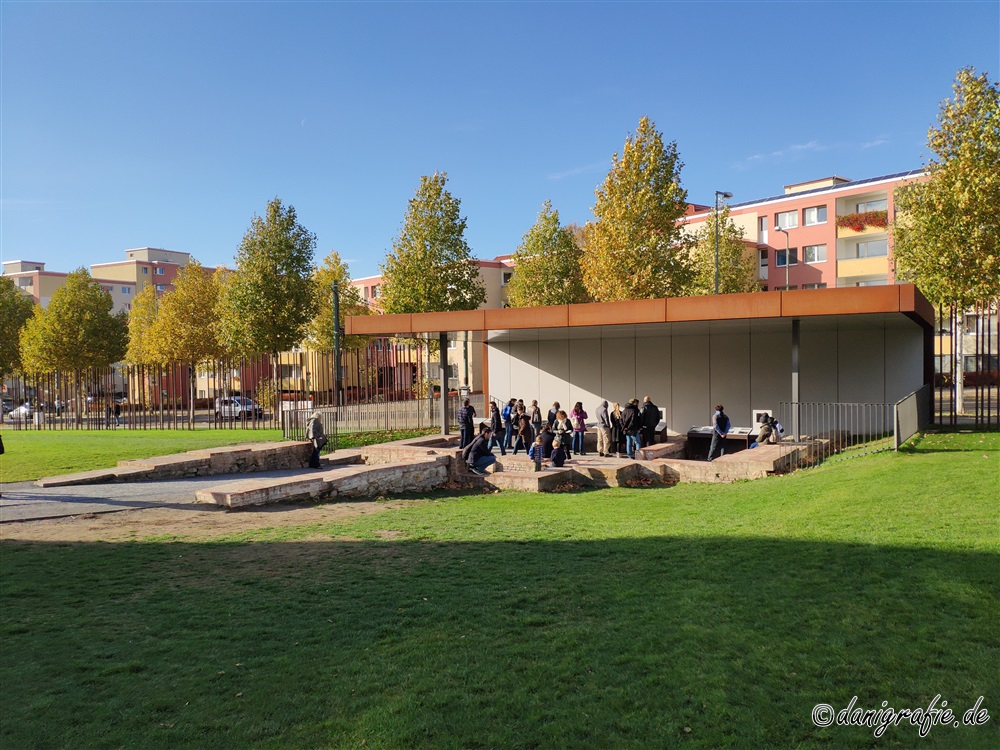 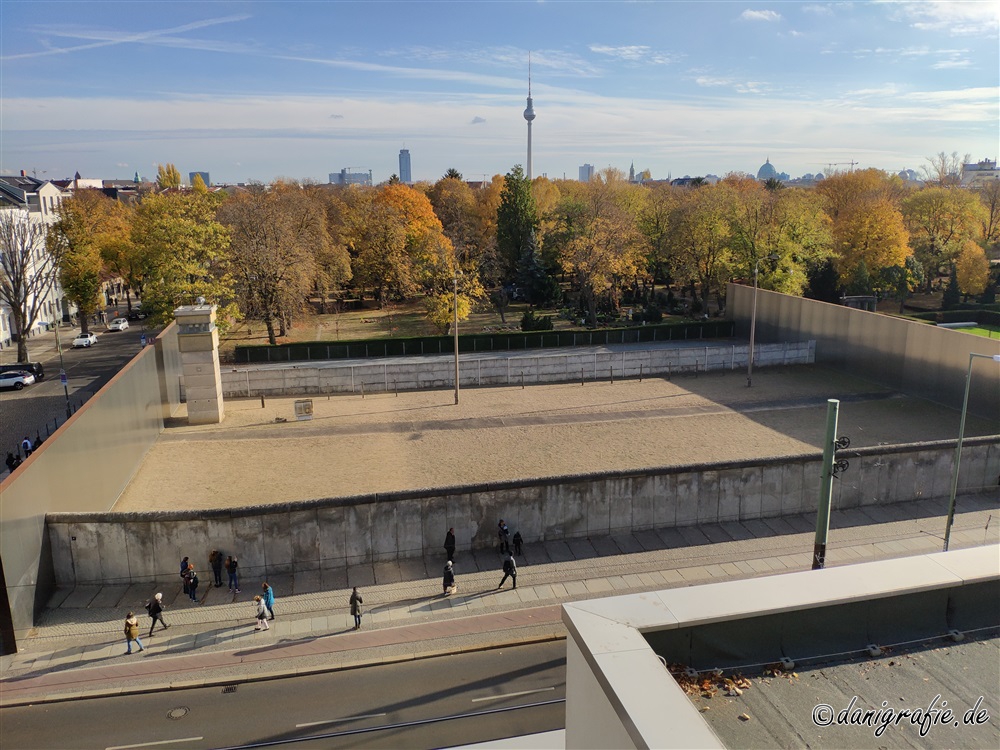 section of a control visit at that time

In many places where there is no wall left, it was symbolically continued with metal bars or floor markings, so that one can follow the course of the wall at any time. 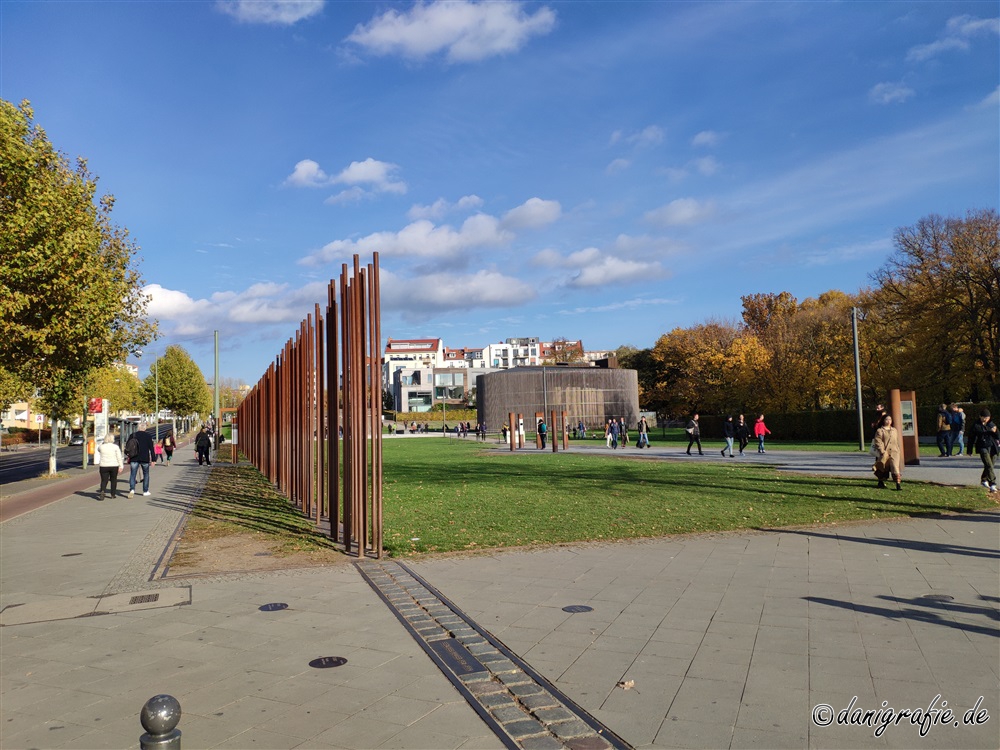 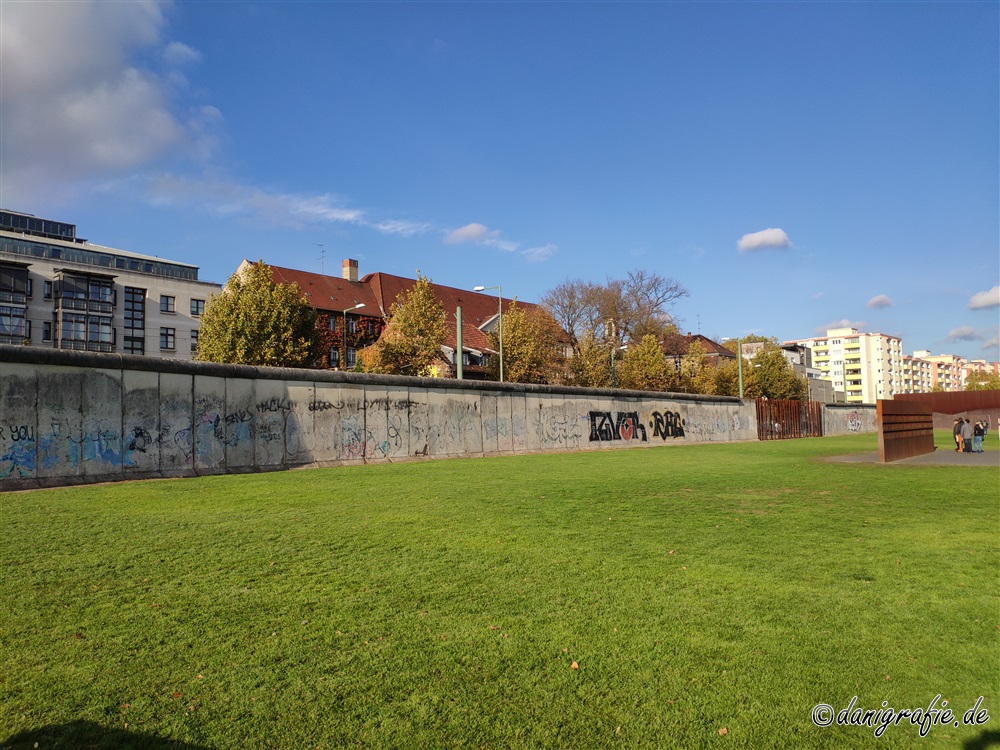 After this partly hard to digest information we went to Alex – the central square in Berlin with many shopping possibilities and of course the Berlin TV tower. 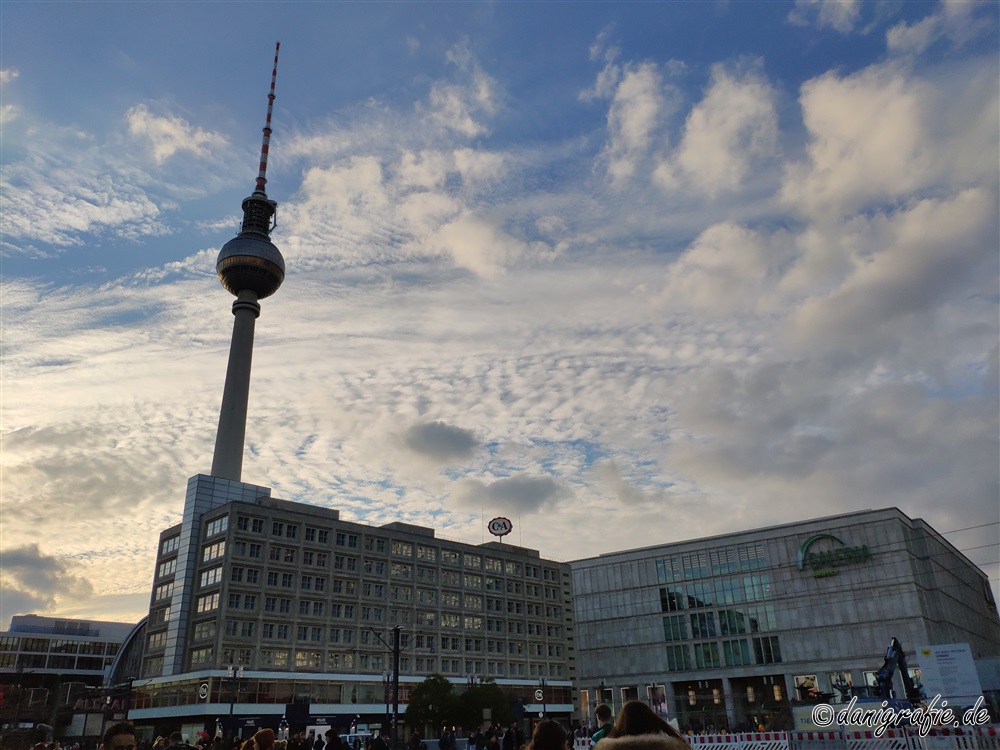 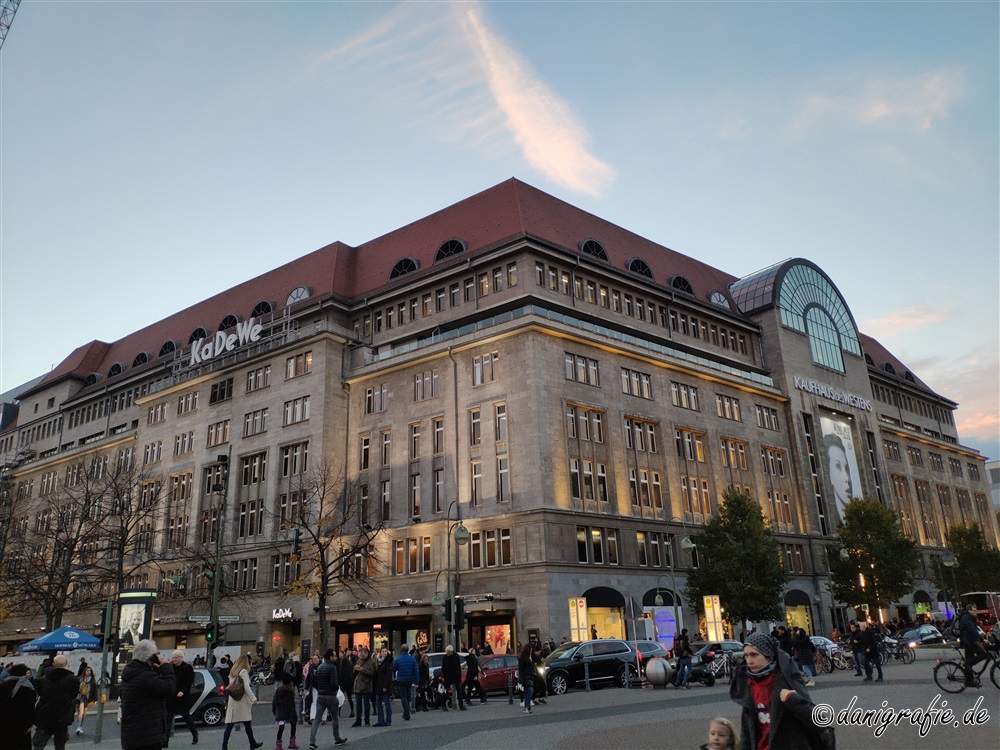 After a good 1,5h at the KaDeWe it was time for dinner. Since we didn’t want to look for a restaurant forever, we took the next best we found: an Asian restaurant.
Since there were unfortunately no drinks in the room, we had to make a short stop in a supermarket before we finally reached the hotel. 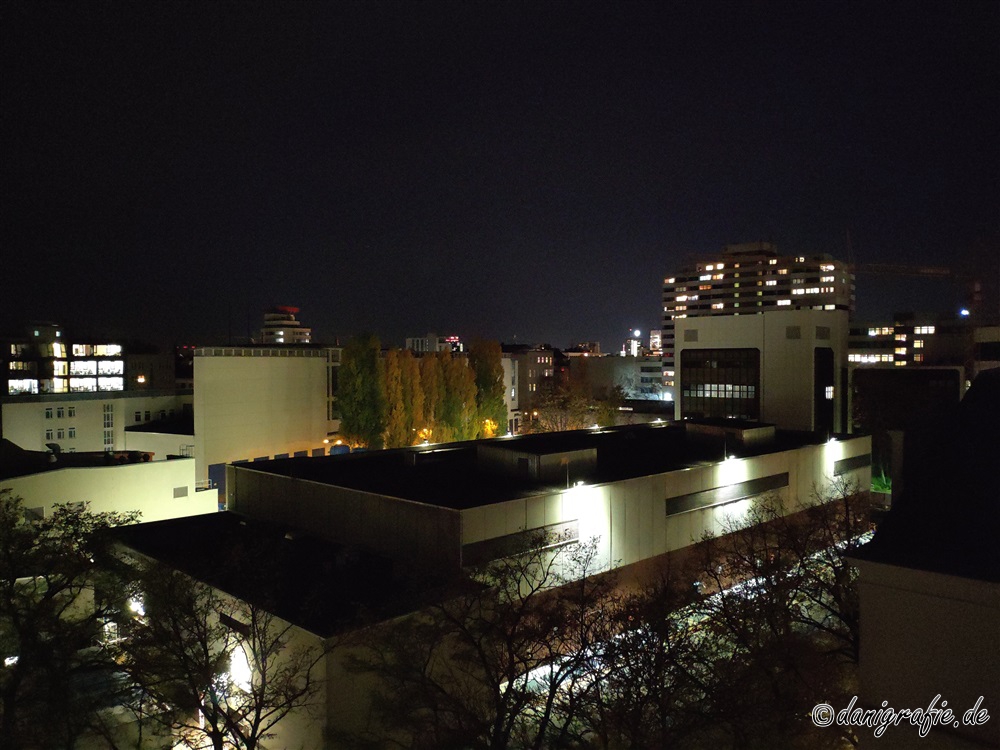 view from the hotel room towards the zoo

Since we wouldn’t see too much of Berlin on our own in one day, we bought a 24h ticket for a “Hop on, hop off” tour. With it we could drive with certain buses 24h long on two defined routes in Berlin. Furthermore – as the name suggests – you can get on and off as often as you like at any bus stop on these routes within the 24h. Of course, these routes were laid out in such a way that you can visit as many of the most famous sights in Berlin as possible.
Our round trip started again at Bahnhof Zoo. From there we took the bus past Potsdamer Platz, Checkpoint Charlie, Gendarmenmarkt, the embassy quarter and many other sights. 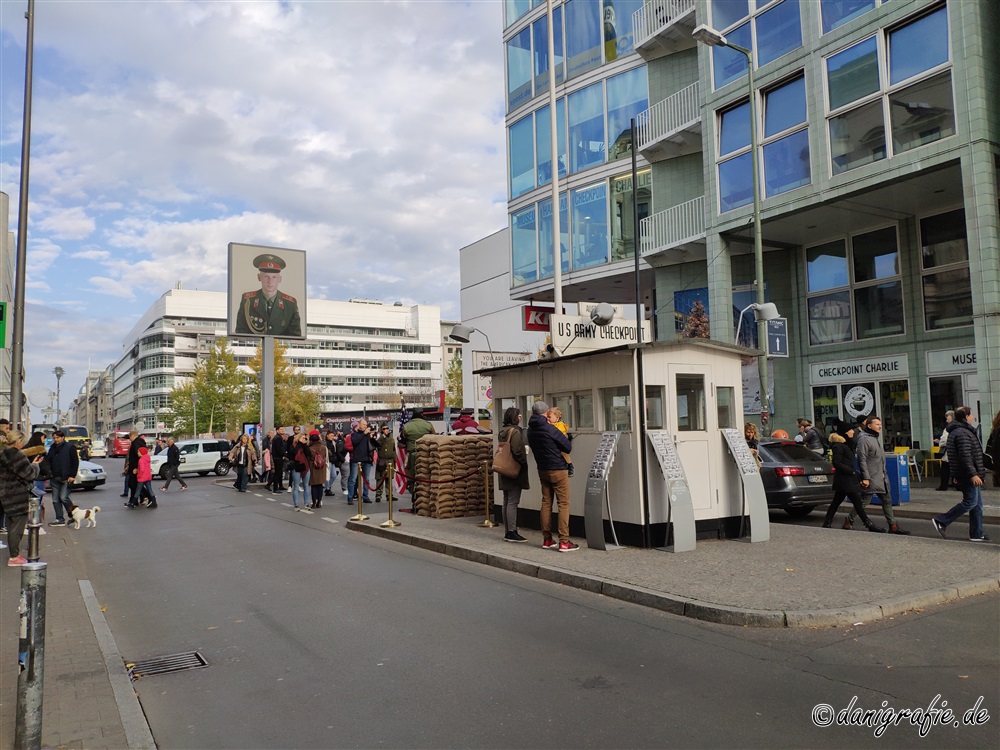 We have interrupted our round trip at the Alex and got ourselves a little something to eat.
Actually we wanted to go up the television tower for a short time. But when we saw that you have to wait 4 hours for the ascent after buying a ticket, we quickly discarded this plan. A pre-order of the tickets the day before is very useful and recommendable. The TV tower is not “just fast” up.
So we went to the nearest stop of our “Hop on, Hop off” provider and continued our round trip – but on the other route – to the Berlin main station.
We also got off there to have a look at the main station. Unfortunately it was not really interesting and so we took the next bus. 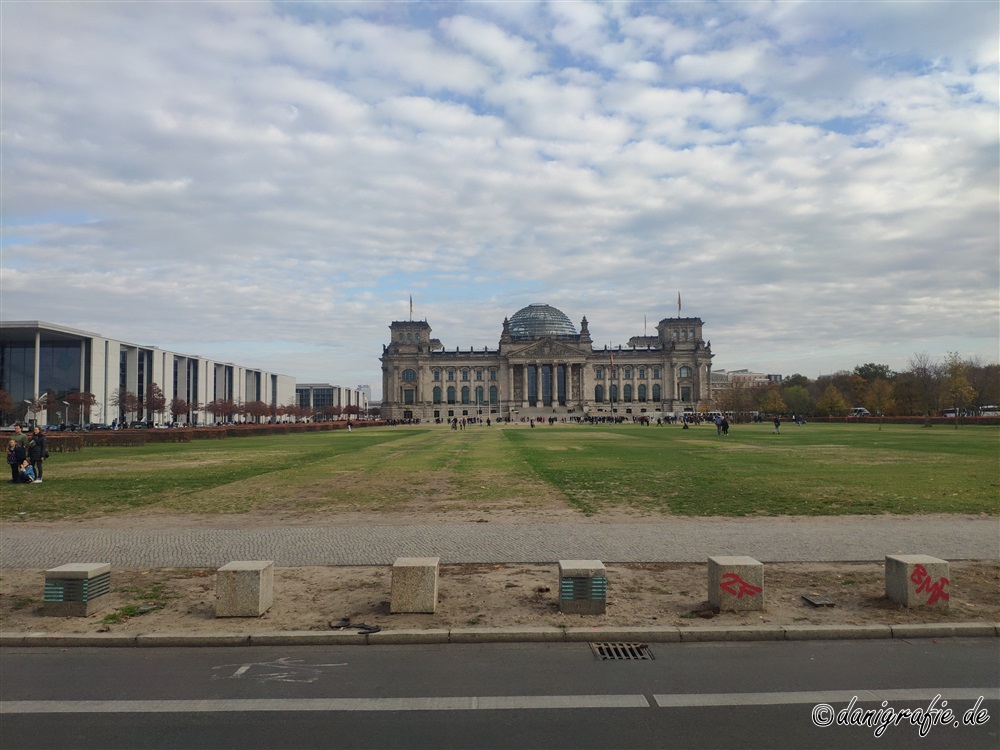 Platz der Republik with Reichstag building in the background

Since we had skipped some things by changing to the other route, we simply continued the next tour at the zoo with the original line.

Past the embassy quarter… 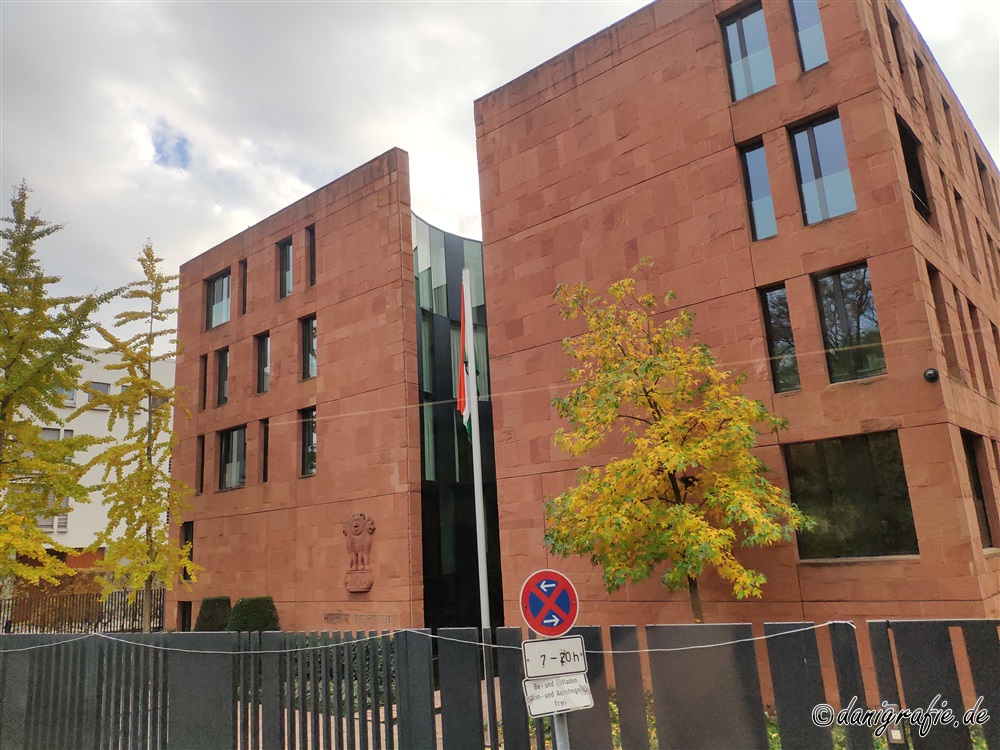 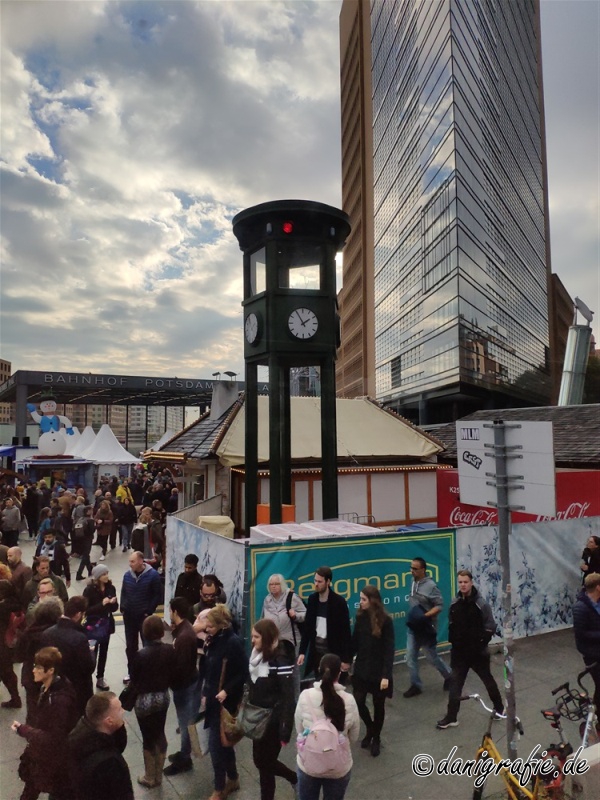 … to the stop at the Brandenburger Tor, where we got off. 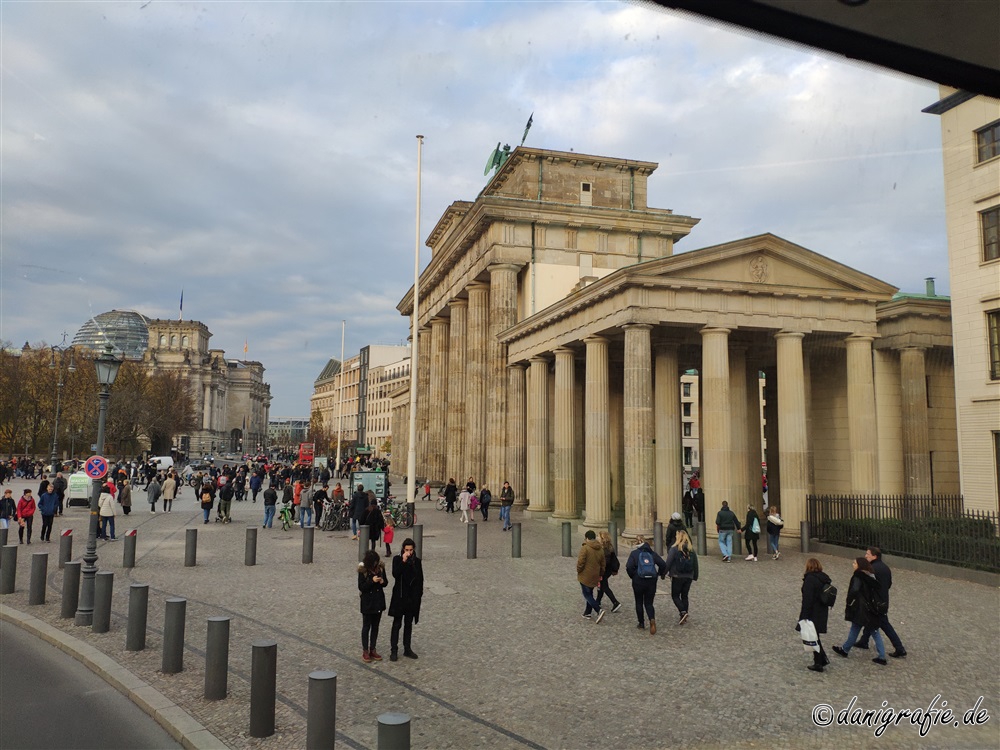 First we wanted to have a close look at the Platz der Republik and the Reichstag building before we went to the Brandenburg Gate. 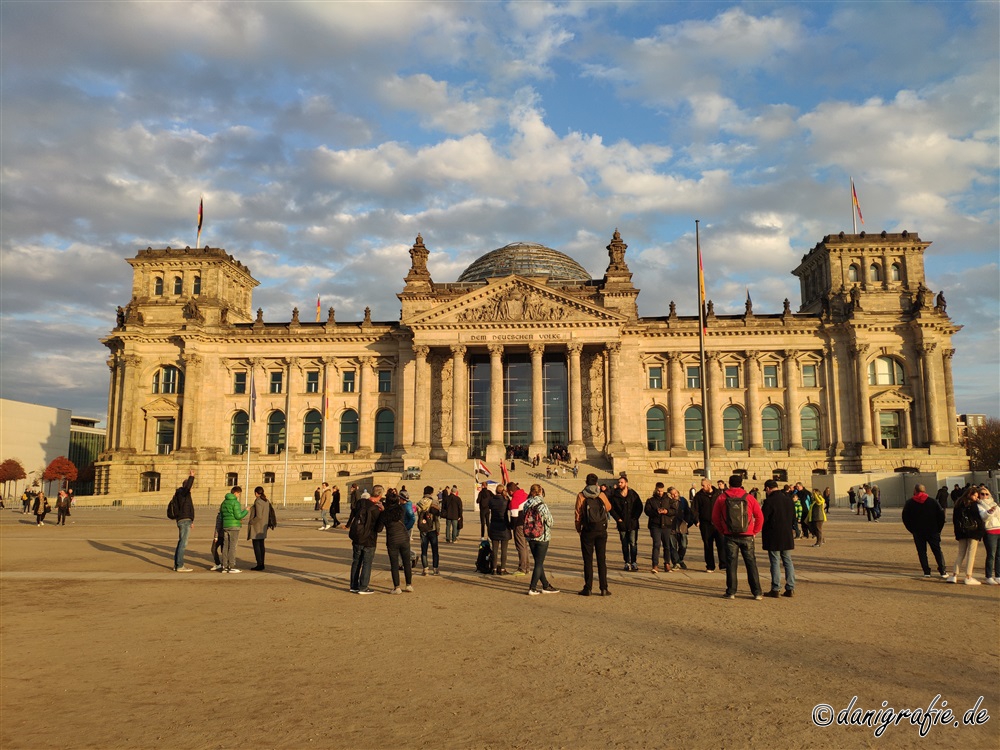 Fortunately, there were not too many tourists, so that one could not only recognize tourists in the picture. 😀
At the Brandenburger Tor there was a little more traffic – but luckily the whole thing got lost. 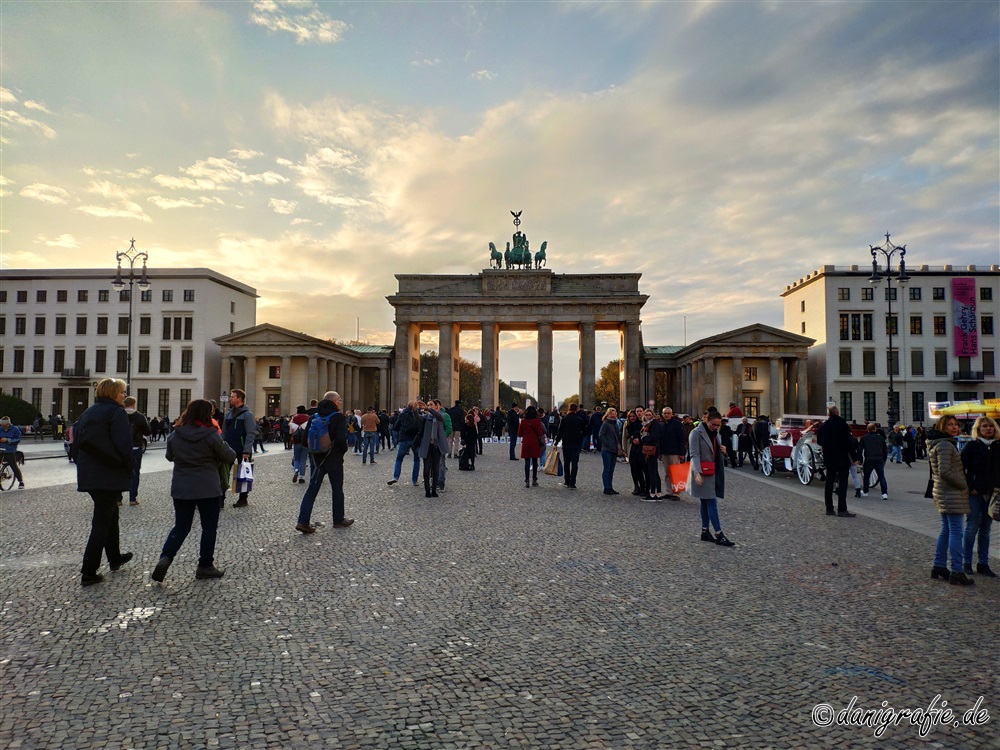 Since it was the last long day in Berlin and I still hadn’t tried any Currywurst, it was obvious to look around for a Currywurst booth. Fortunately, it was not too difficult at the Brandenburg Gate.
Back at the “Hop on, Hop off” stop near the Brandenburg Gate, we continued the last part of the tour to the Bahnhof Zoo.
Since it was already quite dark, we took hardly any usable photos with our smartphone. 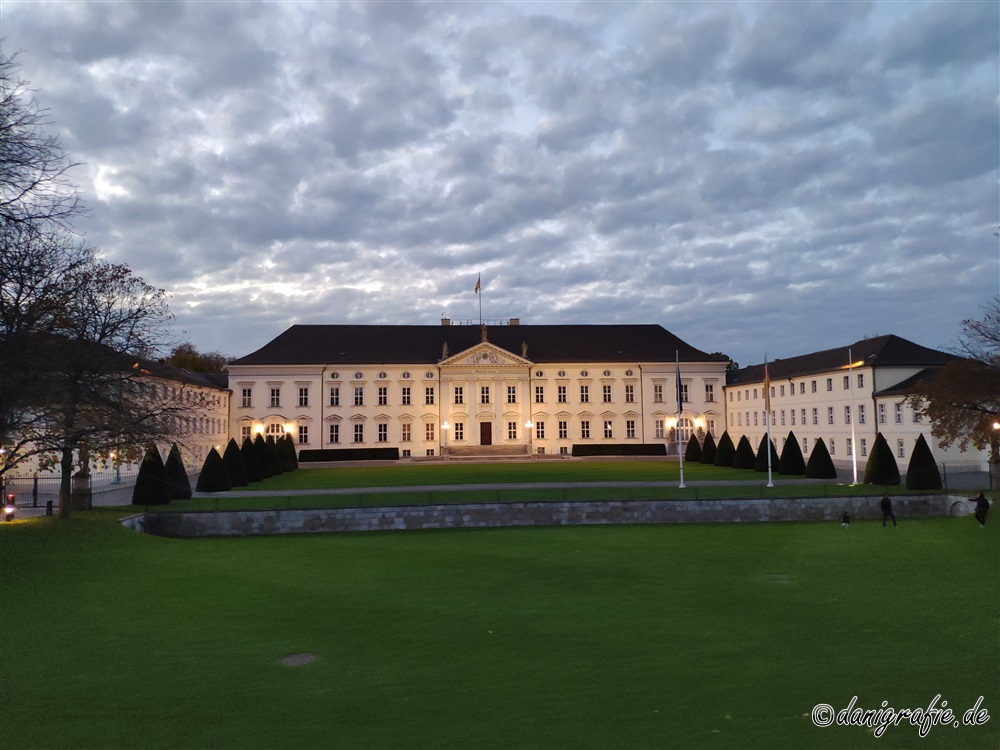 My girlfriend had also not yet tried the “Berliner Weiße“, but with raspberry syrup.
Since we were already on our feet the whole day, we went back to the hotel. After a relaxing phase we thought about the course of the evening. On the internet I found a traditional Berlin pub nearby, where you can find classic Berlin dishes as well as beers. It was a pub, as I imagined it as a tourist. 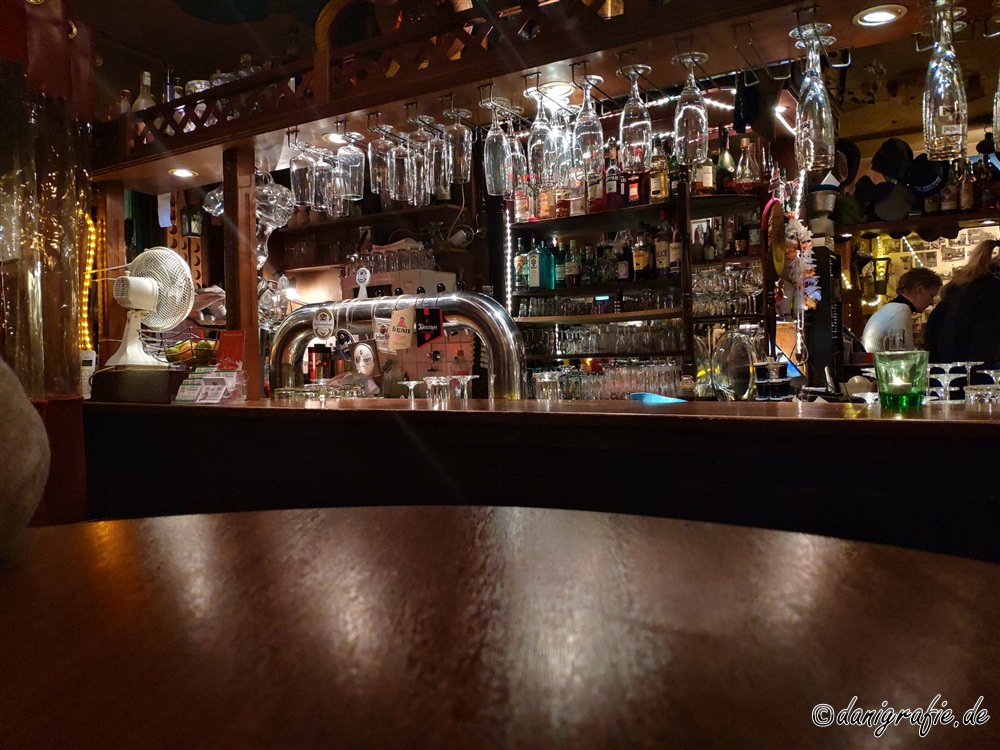 On that occasion I tried the legendary “Berliner Kindl“.
Since I’m not an enthusiastic beer drinker, it didn’t really hit my taste. But it was worth a try. Our stay in the pub was unfortunately not as long as hoped, because we had to leave early on Sunday to start our return flight.

In the hotel we had to check out until 11:00, so that we didn’t have to get up already at 7:00 like in many other hotels. Nevertheless we wanted to spend some time in Berlin before the return flight. So we got up early anyway. We had already packed most of our luggage the day before. Shortly after 10:000 we went one last time to the subway stop “Gleisdreieck” and from there to the station Zoo, where we deposited our luggage.
At Ku’damm we ordered a small breakfast in a café and took the bus to Tegel airport.

“Unfortunately” we were much too early at the airport and had to wait more than 2 hours in the gate area for boarding before we could board the plane.
In dense fog we left Berlin – with delay – around 16:45 in the direction of Munich. 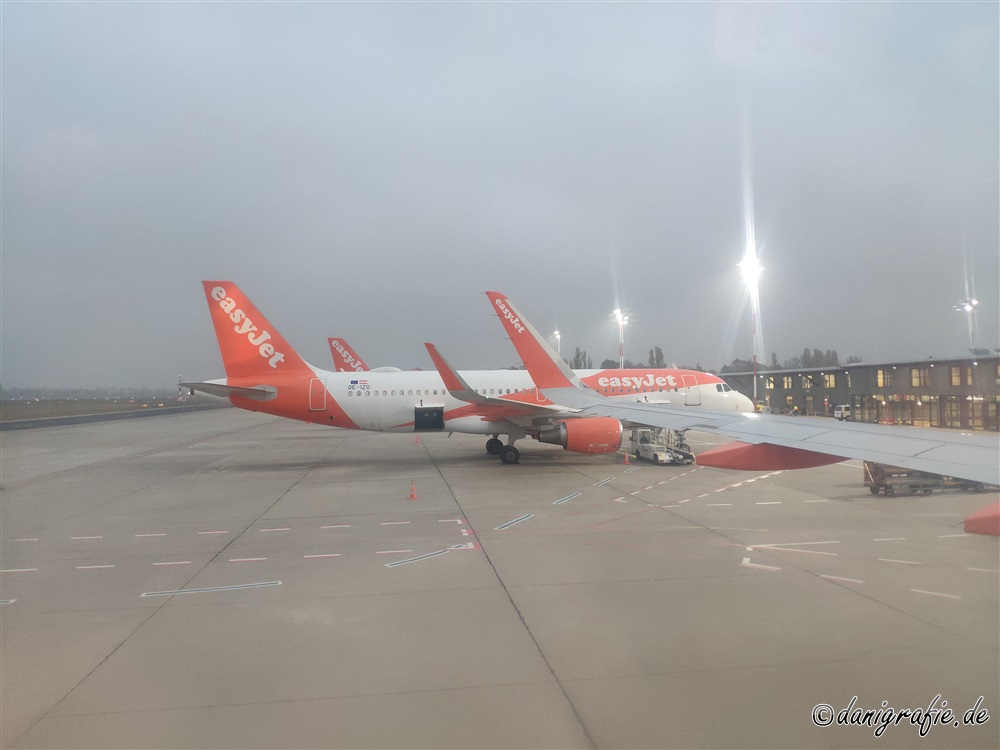 One last look at the tarmac 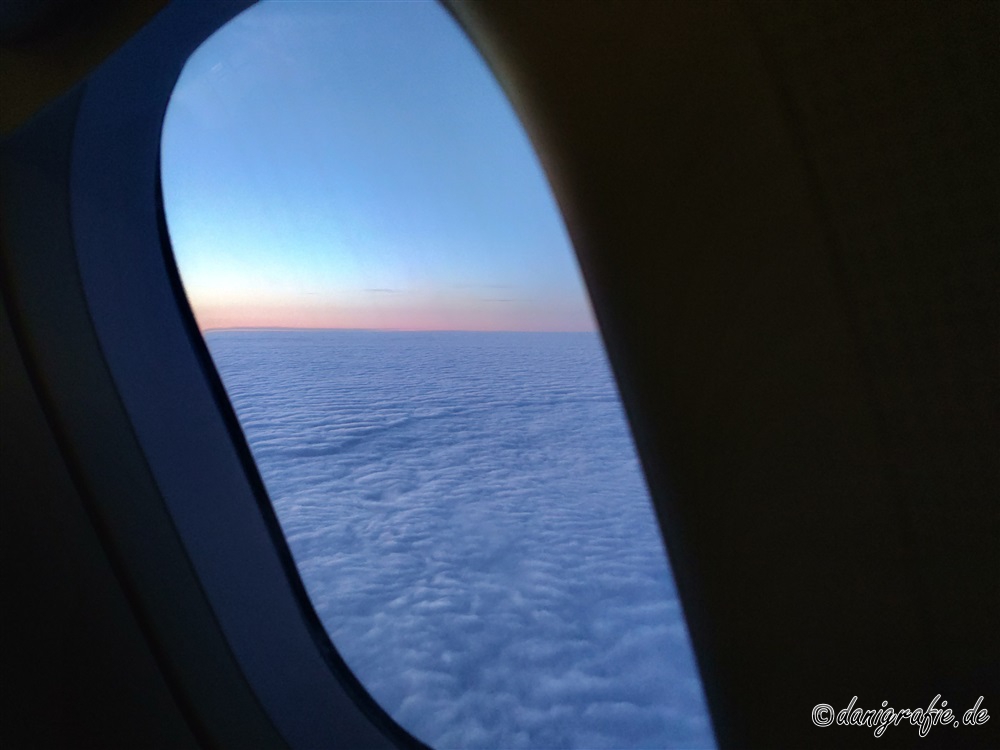 Best weather above the cloud layer with sunset view

Almost 1.5 hours later we landed at Munich airport again, where a driver of the parking service brought us back to the car with which we drove the rest of the way home.

Even though I am generally not the biggest friend of bigger cities – beside from big cities – I was positively surprised by Berlin. If you really want to see Berlin, you don’t have to start under a week. We had 3 full days and the two arrival and departure days. During this time we didn’t even begin to see what we had planned. If it should go sometime again to Berlin, I would plan probably again at least 4 days – we already know a part now.