At the end of October there were fortunately 2 holidays in a row in some federal states in Germany – the Reformation Day, which was out of the ordinary in Bavaria, as well as All Saints’ Day.
So with only one holiday day – Monday – you could get out 5 holiday days.

It had been clear for quite some time that we should go somewhere – only where was the question.
At first there was blind booking, but unfortunately there were no flights out of Munich at that time.
Blindbooking allows you to choose at least 3 destinations from a variety of destinations and only after booking you will be informed where you are going.
Ideal for undecided people.

For everyone who just wants to click through the gallery, you can find the photos from this short trip here

In general, however, the topic of flying was eliminated quite quickly, as flights from Munich or Salzburg at the end of October were still almost as expensive as in September.
At the suggestion of a colleague, the choice fell on Lake Garda.
After we had searched some time for hotels rather in the north of the lake, the choice fell then nevertheless on a hotel in Sirmione – completely in the south of the Garda lake.

In order to have as much time as possible at Lake Garda, the trip started on Friday afternoon.
Unfortunately many other people also had this ingenious idea, as we noticed behind Innsbruck.
Due to heavy rainfall there were already difficult conditions for the trip. 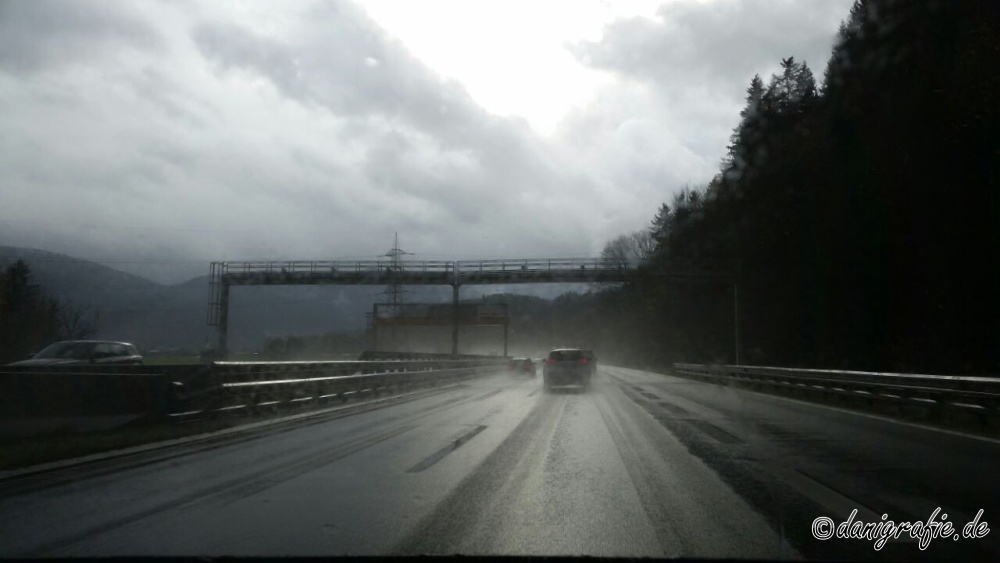 A12 – somewhere between Kufstein and Innsbruck

After a short refueling stop in Hall in Tyrol we were stuck in the middle of a traffic jam towards the Brenner motorway.
About half an hour later the traffic jam had cleared and we were able to continue our journey.

Unfortunately, shortly afterwards we got into a big traffic jam.
It already jammed 10km before the construction site in Bozen Nord, which cost us about 1h again.
Meanwhile it had long become dark and we just wanted to arrive at our destination. 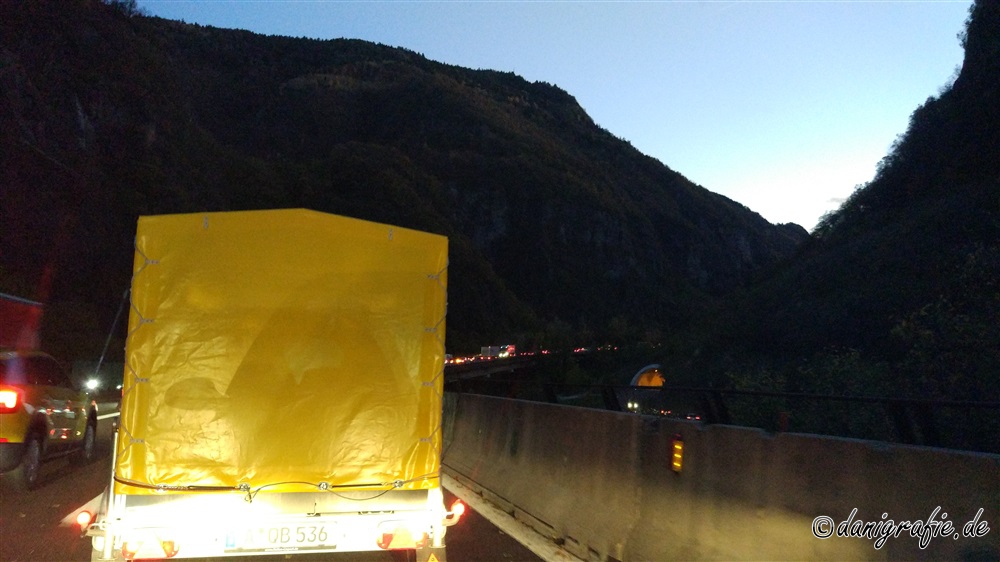 Congestion near Bozen Nord due to a construction site

After more than 7 hours – for a distance that takes about 5 hours – we finally arrived at our hotel in Sirmione.
We quickly cleared the car of the essentials before we made our way to a pizzaria on the island of Sirmione.
The things we could still see in the darkness made us very excited for the next day.

As we only had breakfast included, we had to go shopping at a discount store before we went to bed.

Again relaxed and full of joy we made our way to the historic old town right after breakfast.
The old town is located on an island and was within 10 minutes walking distance from the hotel.

If one has the intention to go to the island by car, this is not very easy.
One has to wait at the police station that was established for this purpose until one is allowed to drive to the island by means of a traffic light system.
The traffic light system is necessary as there is just enough space for a vehicle in the alleys between the houses.
It gets especially narrow on the bridge and through the gate “Sant’Anna della Rocca” – it depends partly on millimetres. 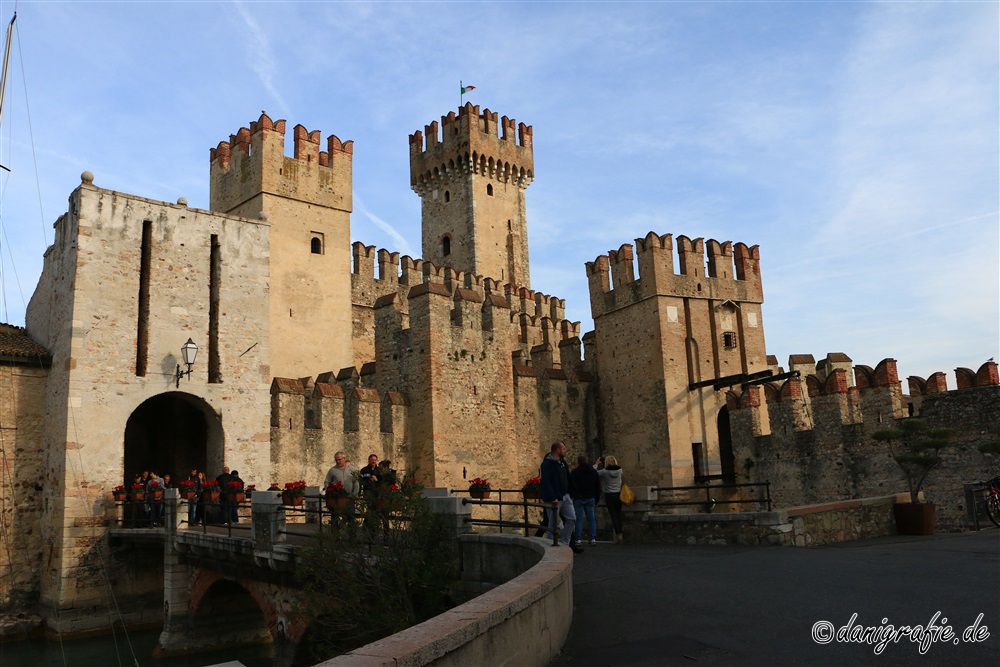 On the whole island there are of course numerous restaurants, bars, ice cream parlours, souvenir shops and hotels.
But there are also houses of the locals on the island. 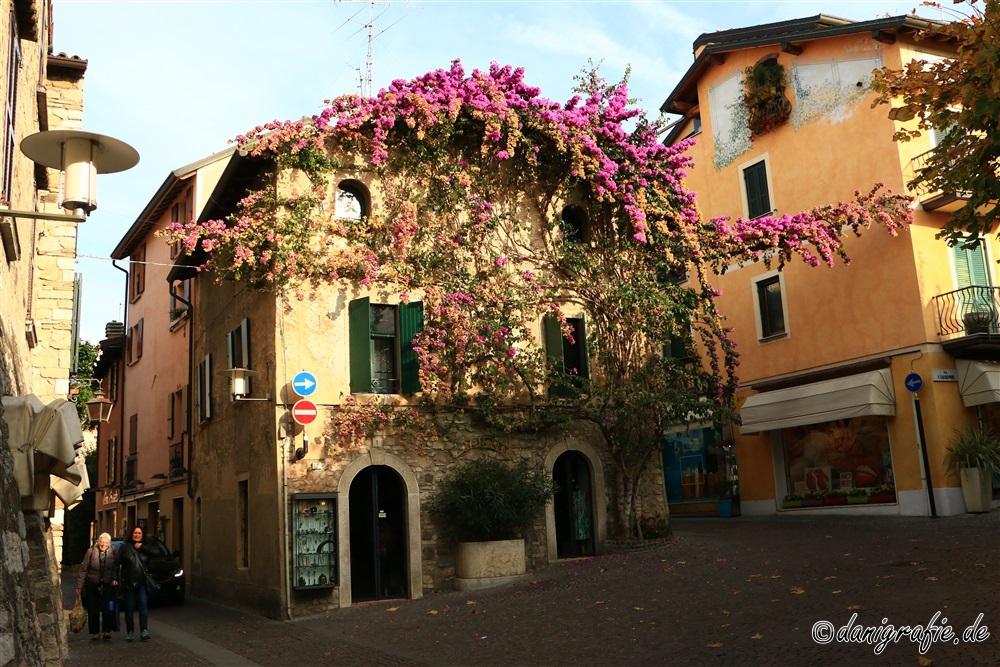 We wanted to see as much as possible of the old town and the whole island on this – albeit windy – day.
Already from the “Parco Pubblico Tomelleri” we had an impressive view over the lake – despite some clouds. 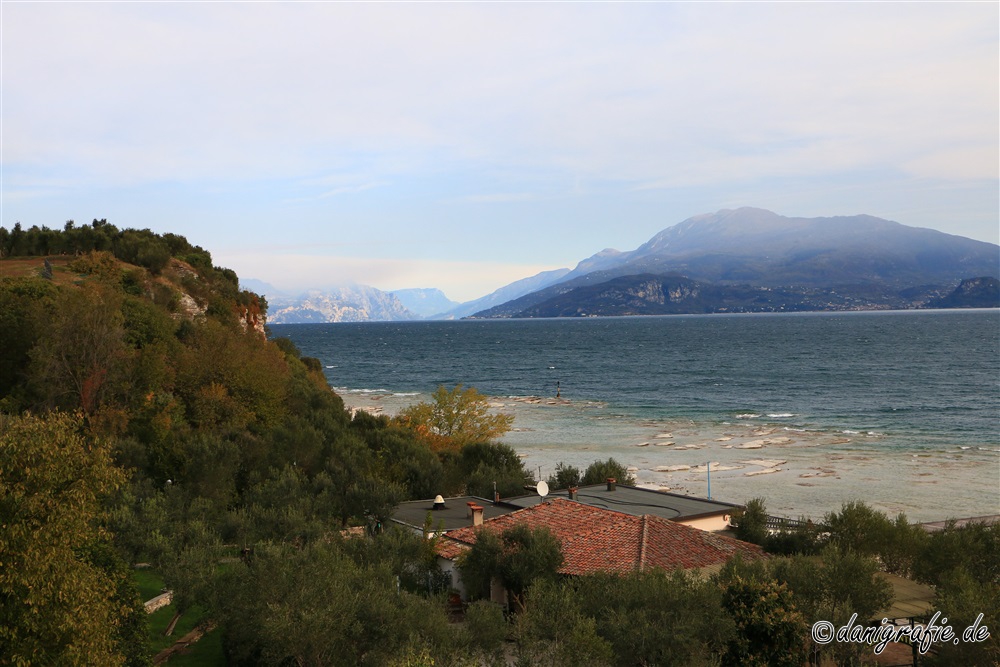 Before we went down to the shore, we wanted to go to the northern end of the island – “Jamaica Beach”.
There are also the “Grotten des Catull” which we wanted to visit on another day.

So we went back to the “Parco Pubblico Tomelleri”, because we already found a way down to the shore at the beginning.
Arriving at the bottom it was suddenly very windy.
The further we went on the jetty towards the lake, it became even more windy, but it was worth it.
Unfortunately the hoped for panorama photos did not work as hoped for due to the strong waves.

But before we went back to the hotel, I wanted to walk along the east coast of the island again.
As the lake obviously didn’t have much water and one could walk into the lake without any problems in some places – among others for photos. 😀 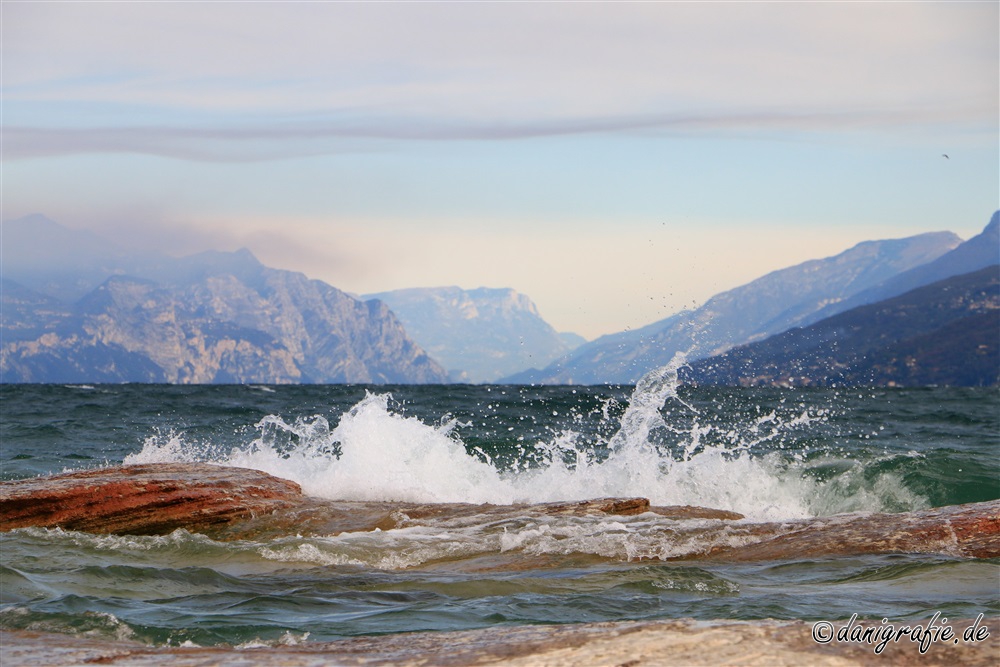 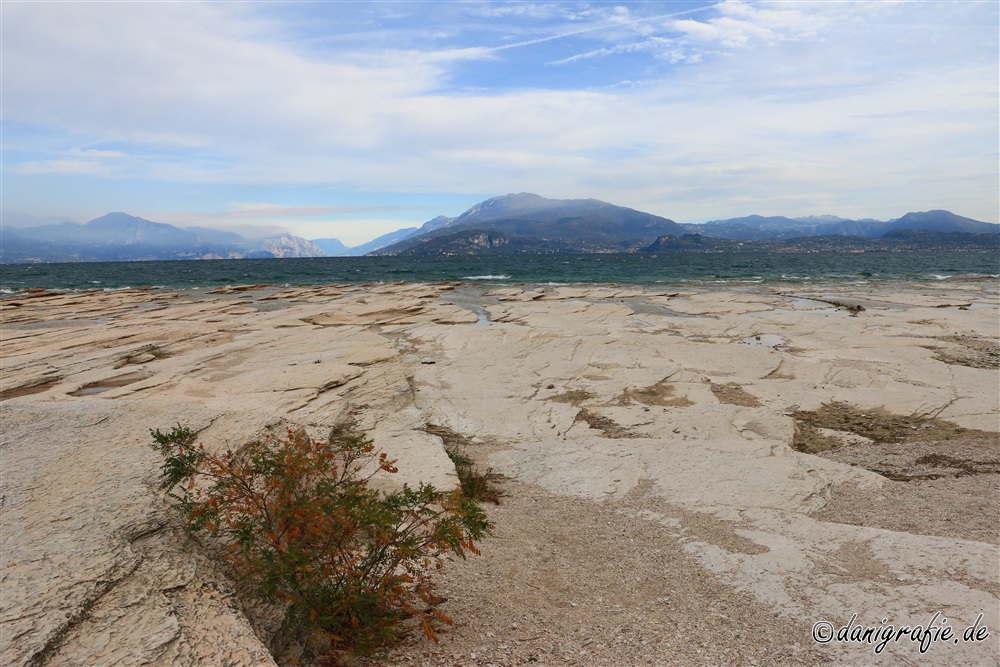 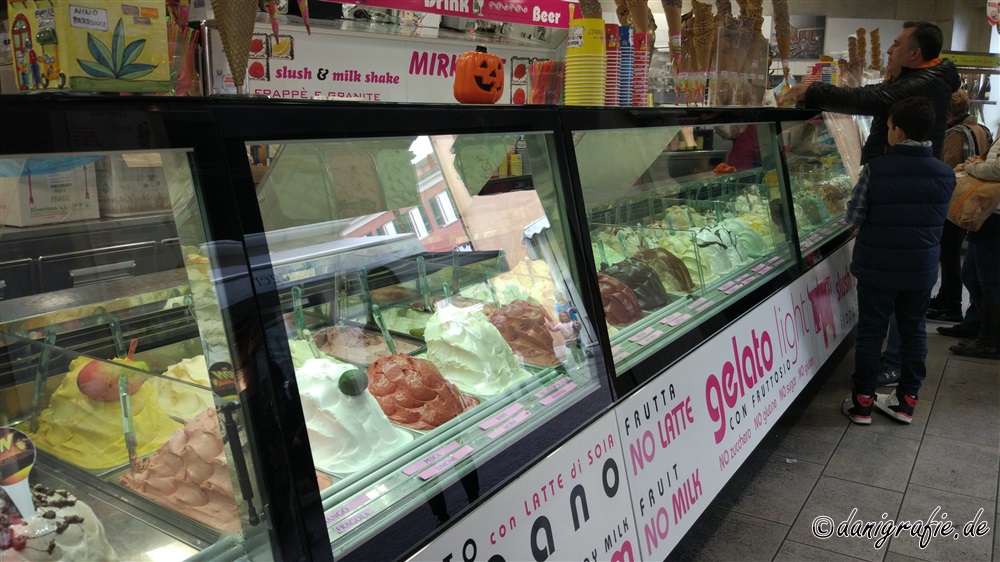 A full day excursion to Verona was planned for Monday, so Sunday should be a little quieter.
In the early morning we took the expressway to Affi and from there we drove over the vineyards to Bardolino.

Unfortunately the whole thing had dragged on due to a long traffic jam as well as wrong data of the Navis once again into the length.
First we landed in the middle of Affi, then the Navi sent us over a “tarred field way” the last piece up to Bardolino.
Especially the last part was adventurous, as the way between the houses snaked through.
No oncoming traffic should have come – that would have been interesting. 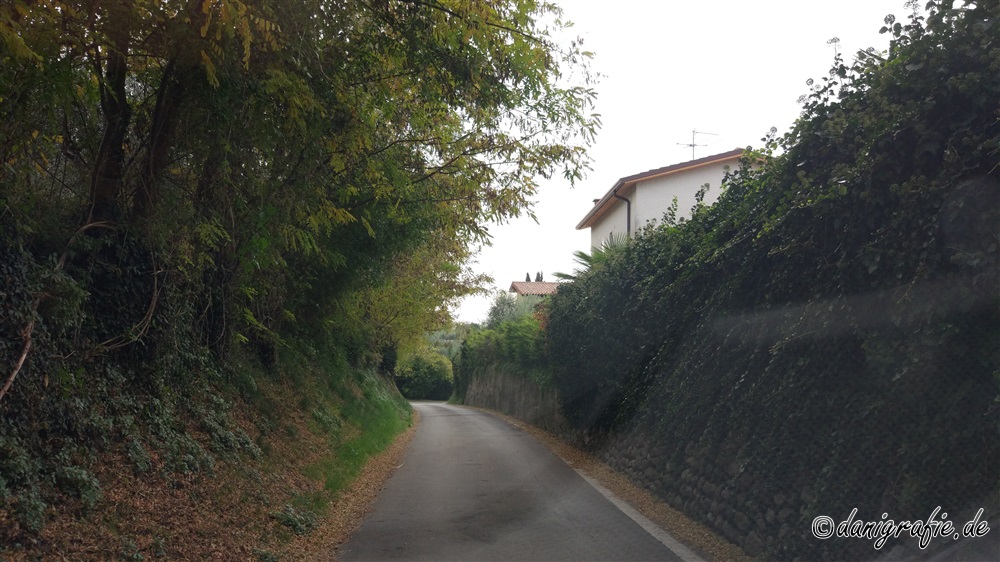 At first we even found a parking lot near the old town.
After a short walk along the promenade we reached the beautiful and historic old town of Bardolino.

In a side street we had a little snack before we continued through the old town.

Bardolino is a very well-known wine-growing region at Lake Garda.
Therefore it was a must to buy a little in a vinotheque. 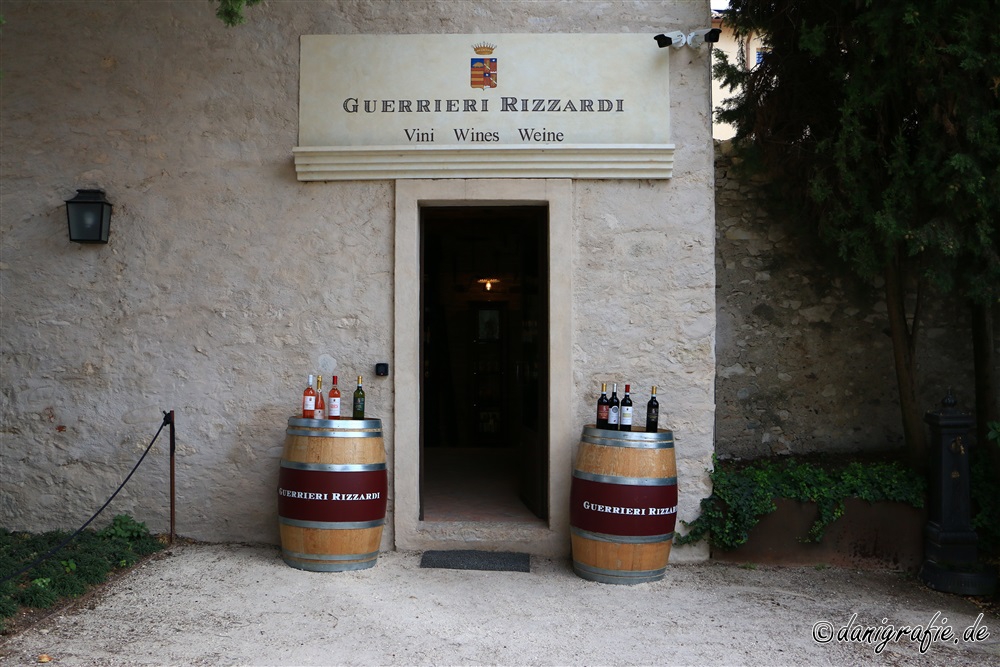 Unfortunately almost all wines in Italy are dry.
However, since I prefer semi-dry or sweet wines, the choice was not that big.

Afterwards I went back to the parking lot and then to the hotel.
On the way back we passed a discount store and filled up our supplies in the hotel room.

Finally arrived at the hotel, we went to a nearby restaurant again, before we went to bed early.

Early in the morning we went straight to the breakfast buffet, because we wanted to catch the bus to Verona at 9:30 am.
For a total of only 10€ per person we could buy our bus tickets – there and back, mind you.

After a relaxed outward journey we reached Verona about 1h later.
Our bus stopped not far from the Arena of Verona.

Unfortunately the arena was still closed at this time.
So we used the remaining time to stroll through the alleys.
Of course we had to visit the “Casa di Giulietta” (stone balcony of Shakespeare’s Julia).
Unfortunately, the balcony was wrapped in scaffolding as it was being restored at that time. 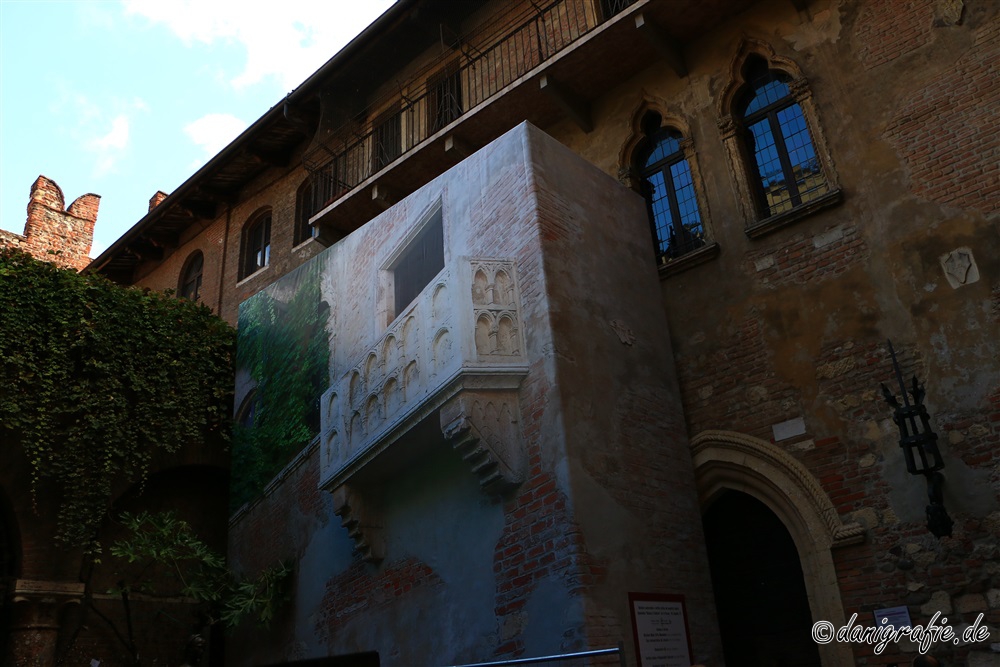 We shortened the waiting time until the opening of the arena with a visit to a cafe directly at the “Piazza delle Erbe” (German = herb place).
Since it was very busy in spite of the supposed off-season, it took some time before we were served.
As soon as we had our snacks on the table, the pigeons were already throwing themselves at it – similar to St. Mark’s Square in Venice. 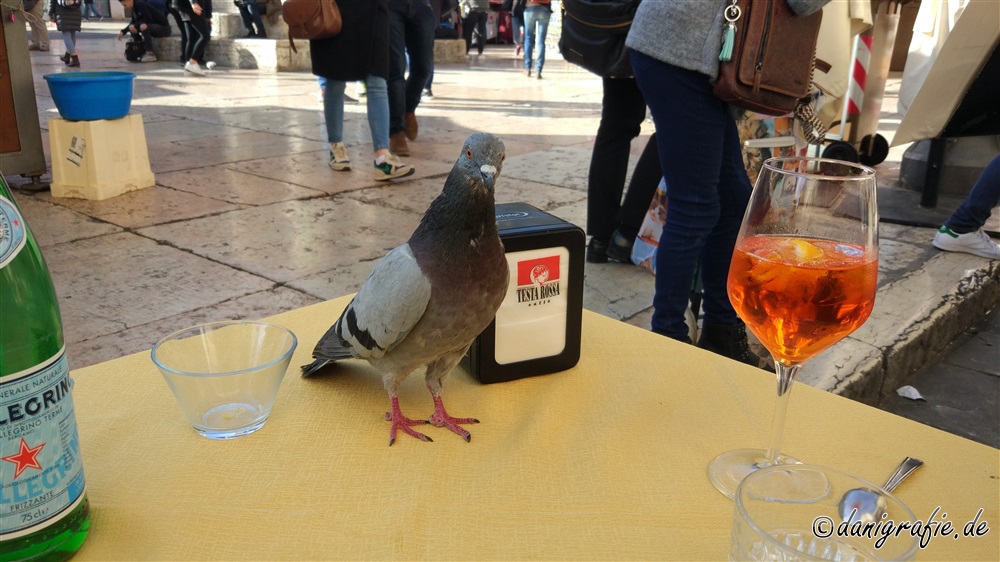 When we were on our way to the arena, we had to realize that we were wrong in time and the arena opens in 1h.
In the remaining time we went to the northern end of the “Ponte Pietra” to take some nice photos.
In addition we could discover a part of Verona that was obviously only explored by a few tourists. 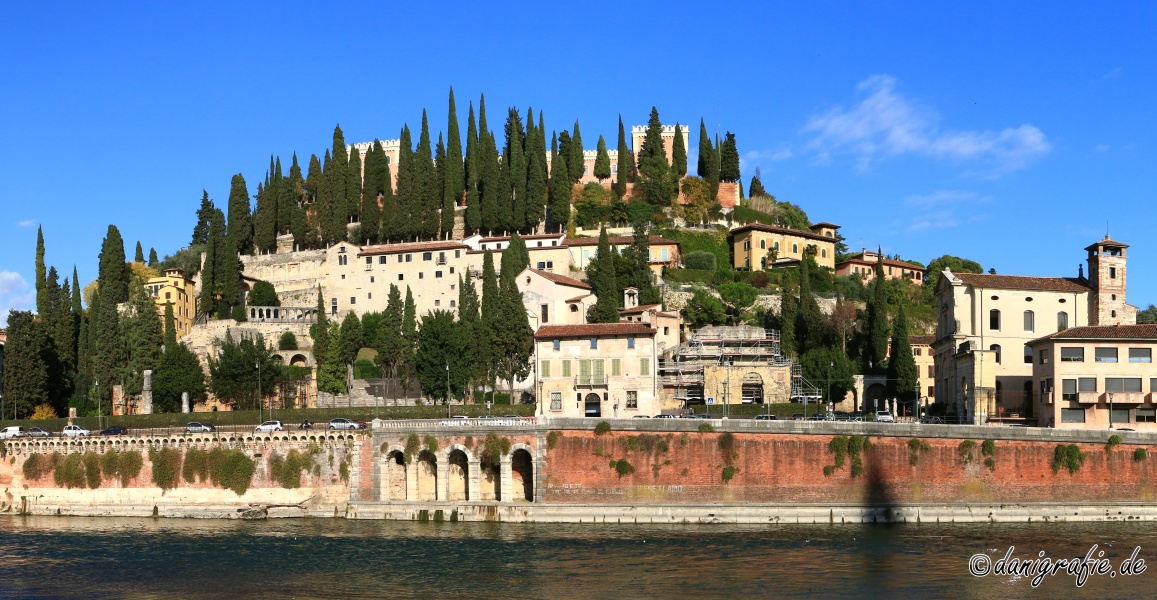 Arriving at the arena again, we had to realize that we were not the only ones who wanted to enter the arena.
Since my girlfriend still wanted to go to the shopping center “Adigeo Centro Commerciale”, the time with waiting and guidance would have been too short.

After some complications to find the right bus line, we “finally” reached the shopping center.
To have a bus in reserve in case of emergency, we decided to take the penultimate bus ride back to Sirmione.
However, this meant a tight schedule in the shopping center. 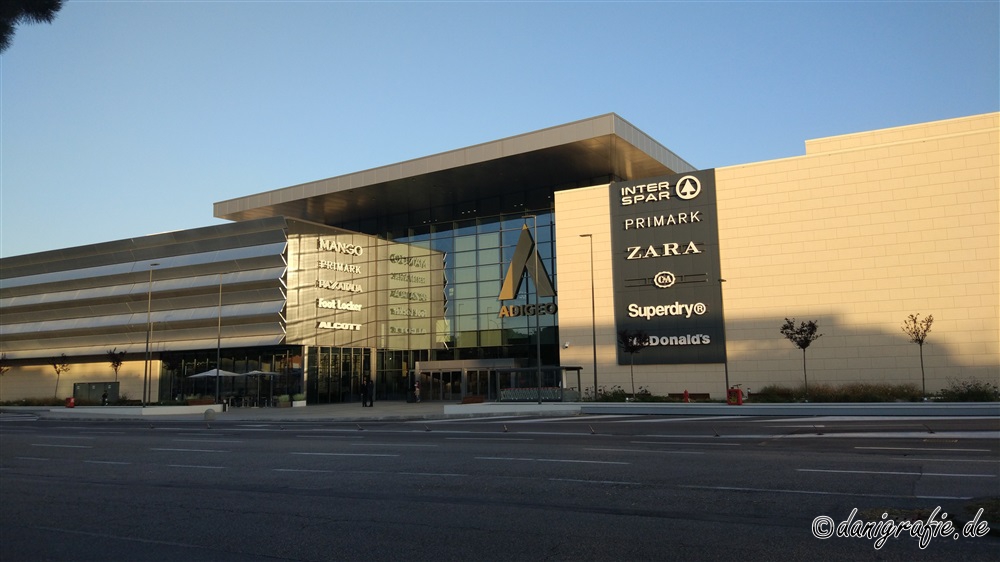 Arrived again at the bus station “Verona Porta Nuova”, we were lucky for a change.
The third last bus was still at the stop and so we could even take a bus home earlier than planned.

The last real day of vacation had begun.
Fortunately the weather this time was almost cloudless and blue sky.

Spontaneously we decided to visit the “Grottoes of Catull”.
What we didn’t know at that time: they closed on Tuesdays of all days…
When we arrived again at the northern tip of the island, we stood in front of closed gates.

This time we took another way back to the beginning of the island and passed a cellar shop.
Unfortunately the cash was no longer sufficient – the choice was really huge.

One last time we stopped at a cafe.
It seems that for many cafe and restaurant operators the end of the season is 31.10., because almost half of all restaurants of the previous day were closed.

Of course I had the camera with me again and was able to take some more pictures on the way back to the hotel. 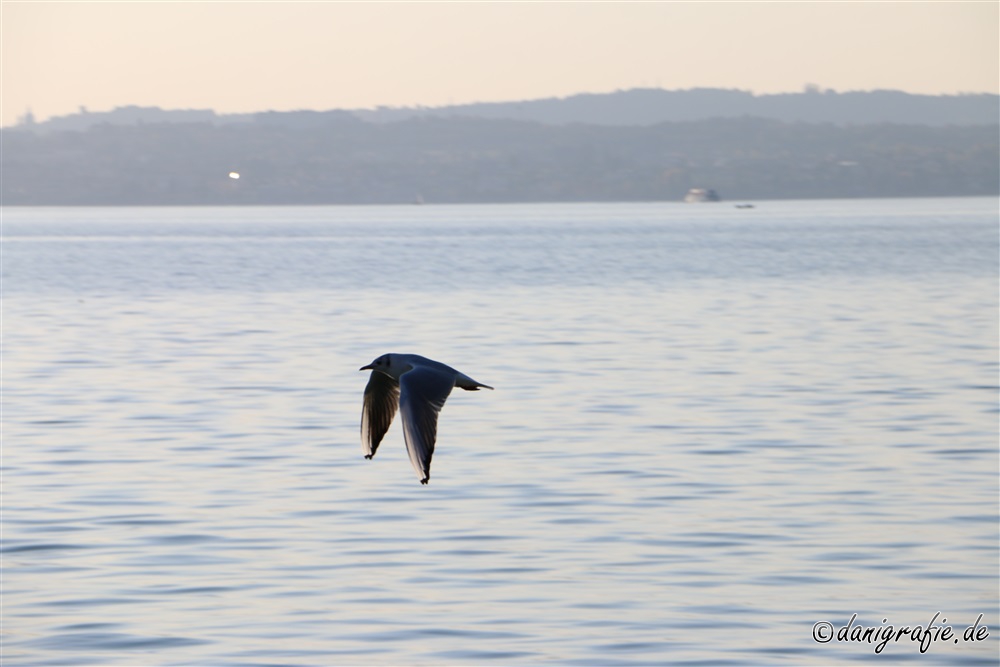 Back at the hotel, we packed everything we didn’t need anymore.
Of course we could not miss some souvenirs for one or the other person.
So we went again to a local supermarket.
Before we went to the hotel I had to take some tripod shots. 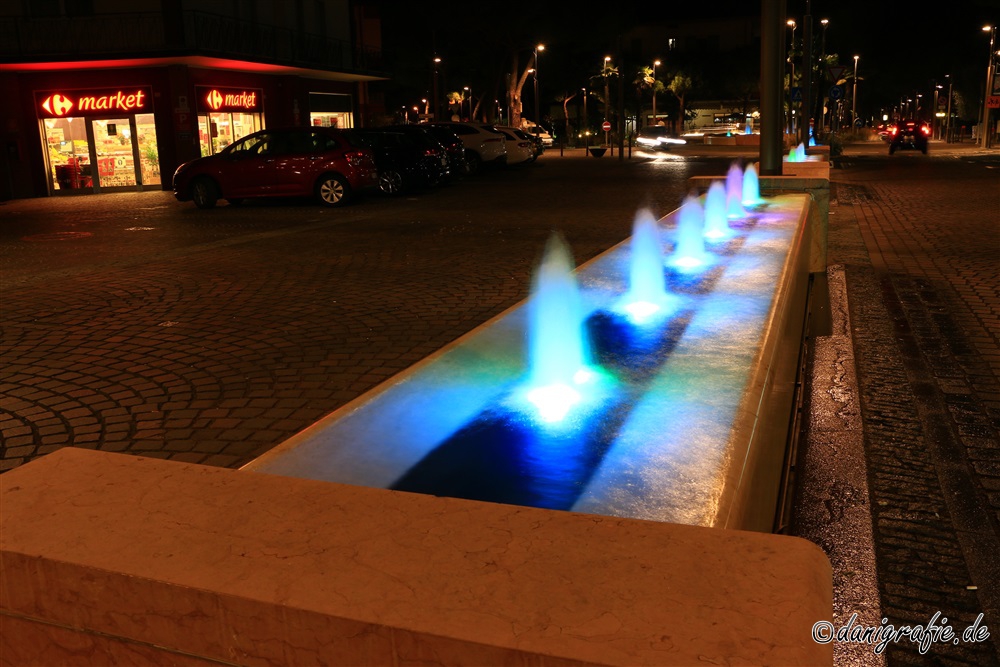 We also stopped for a last time.
The restaurant made a more “upscale” impression.
Although it was recommended to us at the check-in on the first day and we also looked at the prices on the notice board, we never really noticed it.
If we had done this earlier, we could have saved some money.
Especially as it is not far from the hotel.

We could eat for 2 persons for almost 30€.
Including 0,5L Bardolino red wine, 1L water, sumptuous starters as well as 2 main courses for 10€ each.
And the costs incurred in many places in Italy for the place settings were not invoiced here. 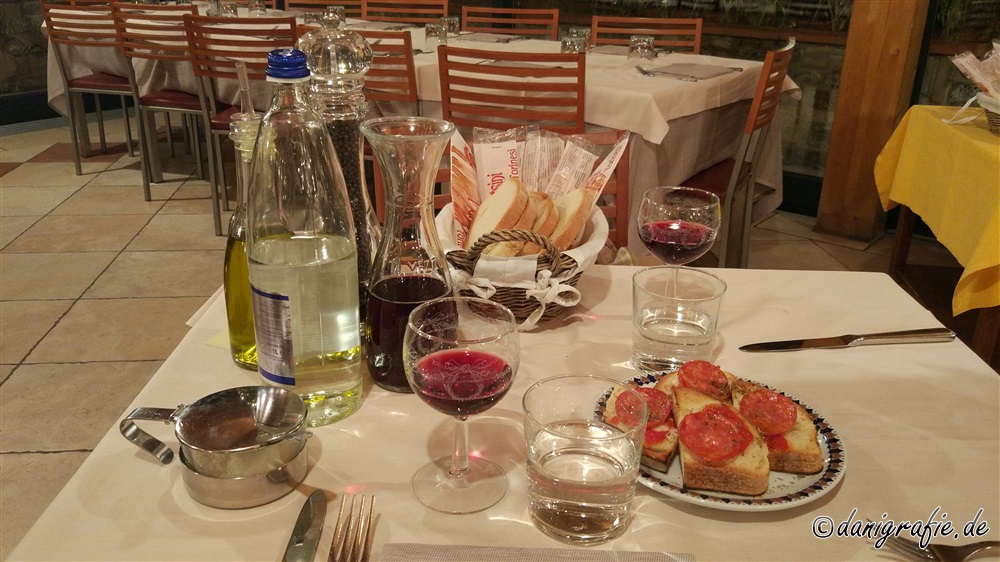 Well, for next time, at least we’ll know. 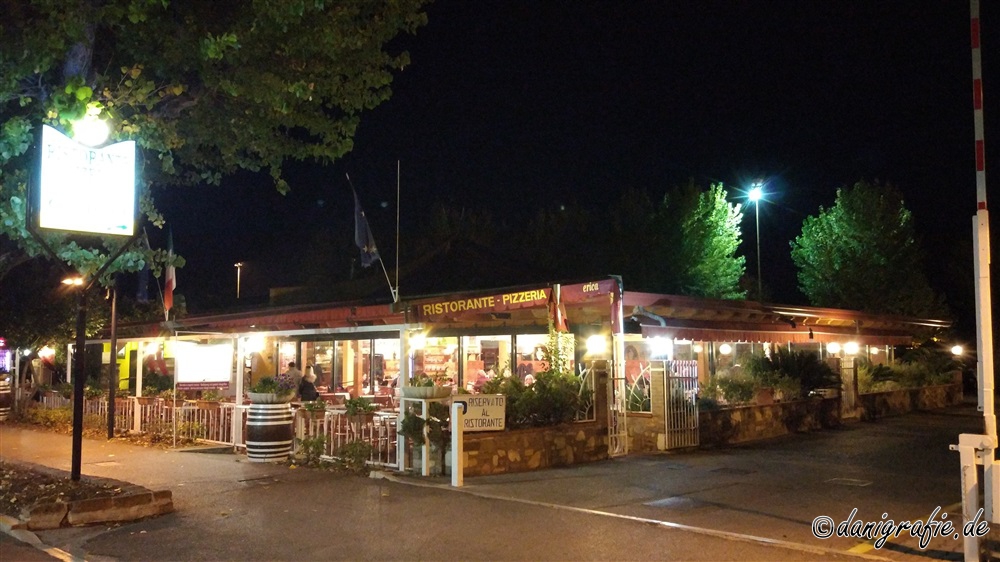 Since we started the return trip around 10:00, we could drive at least this time in daylight.
Until shortly before Bozen everything went without a hitch.
As was to be feared, there was again a lot of traffic jam due to the construction site of the outward journey. 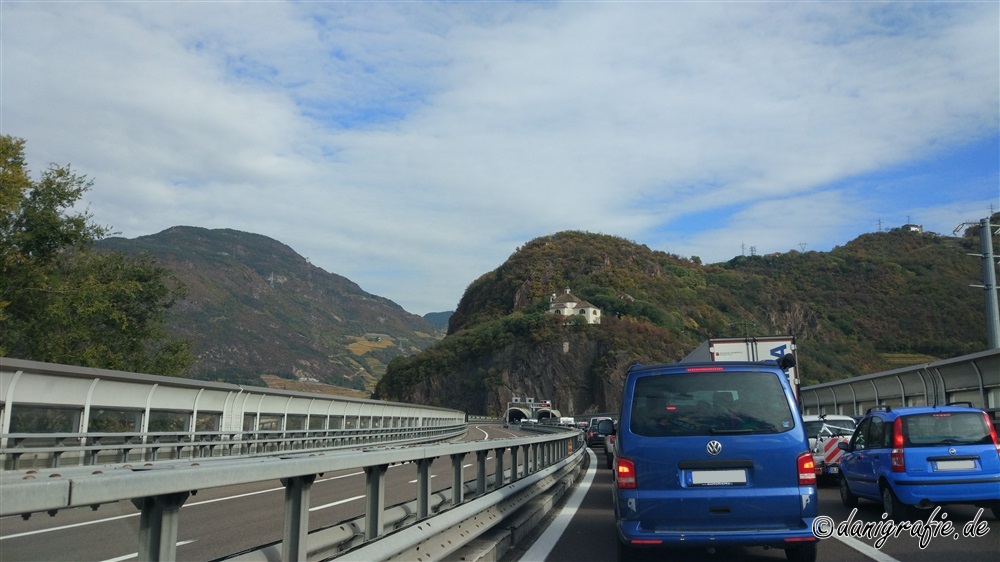 At least one could take the opportunity to take some photos and admire the area. 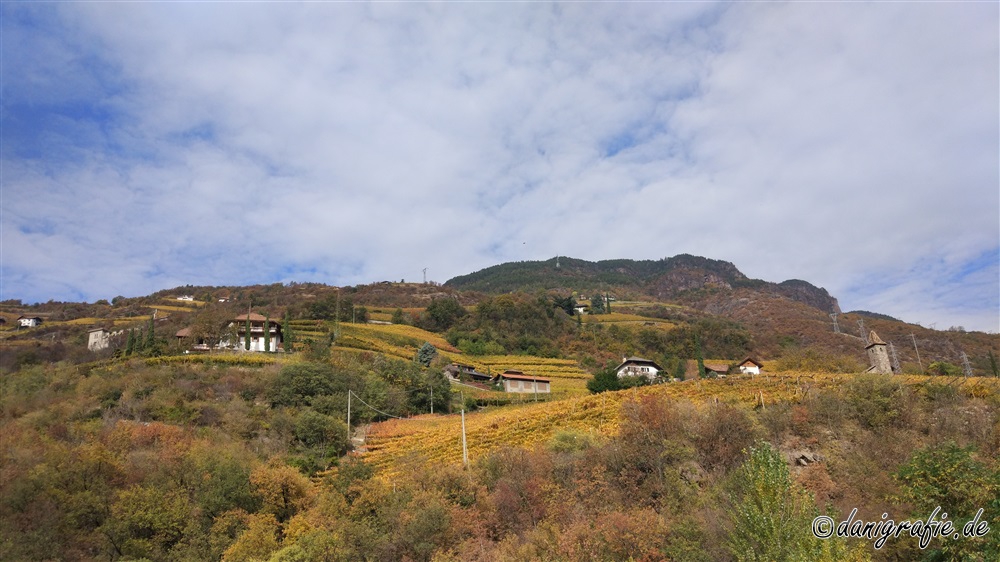 After 1h traffic jam we finally passed the construction site and the trip could be finished without further incidents after “only” 7h at home.

In summary, we can say that the region around Lake Garda is very impressive.
It is definitely an interesting change if you only drive to the sea.
This was certainly not the last time that there were photos and a detailed report ( 😉 ) from the Lake Garda region.