Once a year, the international NSU vehicle meeting takes place around Whitsun.
This time the meeting was held in Cavallino at Camping Union Lido.
Since I was only in Waging at the meetings so far, the meeting in Italy was connected with a short vacation without further ado.

But now back to the actual holiday report.
First of all it has to be said that neither of us knew the region around Cavallino-Treporti.
Often we had to improvise or simply didn’t know certain things.

Our accommodation at Camping Cavallino was only ready for occupancy in the afternoon.
That’s why we didn’t leave home until about 9:00.
We hardly had to worry about holiday traffic, as Tuesday was after a holiday.
Except for a short traffic jam at the A4/A23 motorway junction in Italy and a 20km long construction site, the journey was uneventful.
Apart from the annoying 100km/h restrictions in Austria nearby every major city and just before and during all tunnel crossings.
We reached our destination after a total driving time of 5.5 hours – the Camping Cavallino.

Unfortunately, the weather looked like rain.
So we brought most of our things into the accomodation (if the place allowed it) before we went to the sea in the evening. 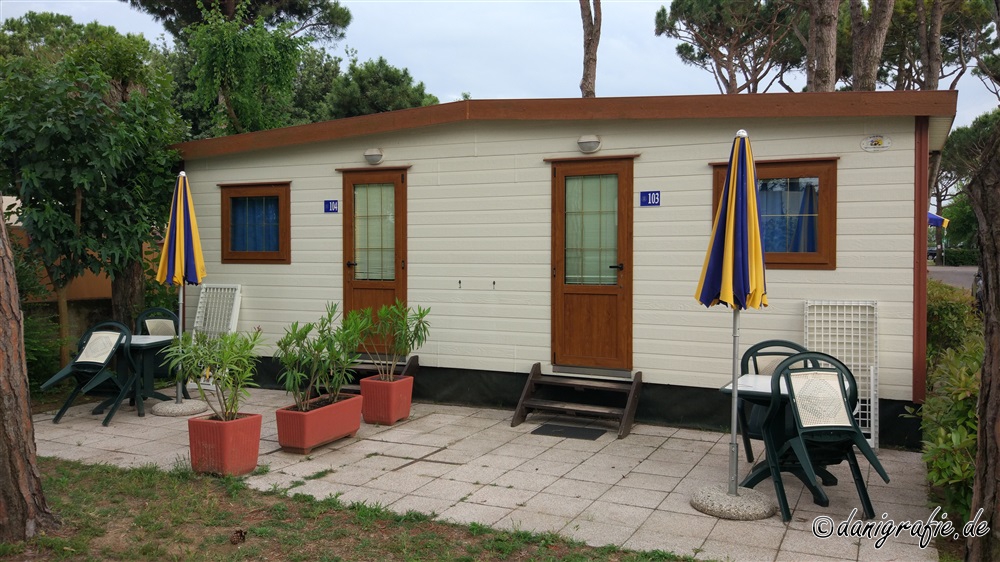 Our accommodation from the outside – limited to the bare essentials

Today’s topic could be summarized quite well under the term “Lido”.
In the morning we first went to the beach (which is translated as “lido” in Italian), then to the campsite “Union Lido” and finally to “Lido di Jesolo” – Europe’s longest pedestrian area.

Unfortunately we had no luck with the weather on the day of arrival, so we went down to the beach right after breakfast.
At night it had probably rained, because the sand was still damp and the air was cool. 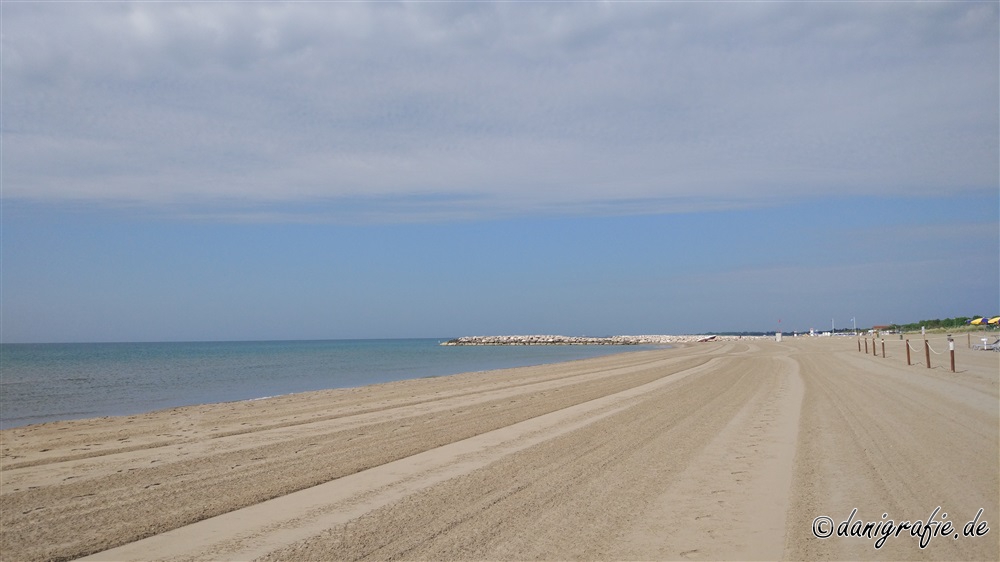 When it got warmer around 11 o’clock, some crazy people *cough* decided to climb into the “refreshingly cool” sea.
… maybe those lunatics should have waited till this afternoon…
But we already had other things planned for the afternoon. 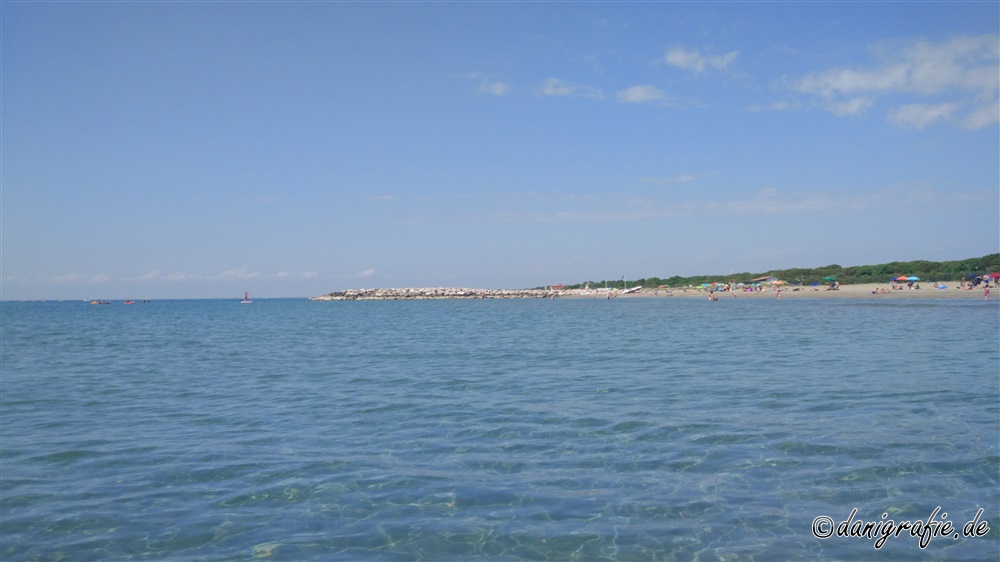 Almost nobody in the water – why?

It is particularly mean that one comes first into a small “water basin” with pleasantly warm water.
This basin was separated from the rest of the sea during low tide.
When you crossed the sandbank that separated the “warm water basin” from the sea, you first realized how cold the sea actually was.
Of course, there was no turning back.

In the afternoon we went to the Union Lido and afterwards to Jesolo.

After our visit at the campground Union Lido we wanted to visit the pedestrian area in Jesolo.

So we went – exactly – to Jesolo.
The only trouble was that there was nothing of a pedestrian zone to be seen here far and wide.
After a short research we find out that we should have gone to Lido di Jesolo.
How good that we drove through Lido di Jesolo 10 minutes before and had already bought a parking ticket in Jesolo…..

Well, so go back the last few kilometers and look for a parking space again.
A few wanderings later we found an affordable and guarded parking lot not far from the pedestrian zone.
Meanwhile it was dawn and so I left the camera in the car. 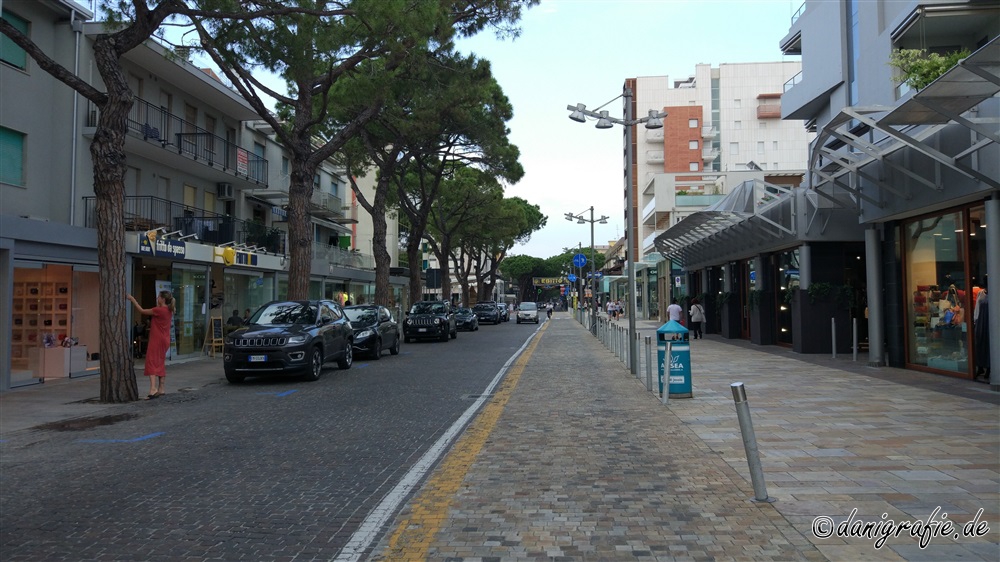 Of course, after all this dawdling, a restaurant needs to be found at some point.
Fortunately not too difficult in Europe’s longest pedestrian zone.
It is rather difficult to choose one of the restaurants.
In Italy I prefer seafood – why always the talk is of “fruits”…
So this time we had a mixed plate of seafood.
Not the cheapest on the menu, but I can have pasta and pizza all year. 😉 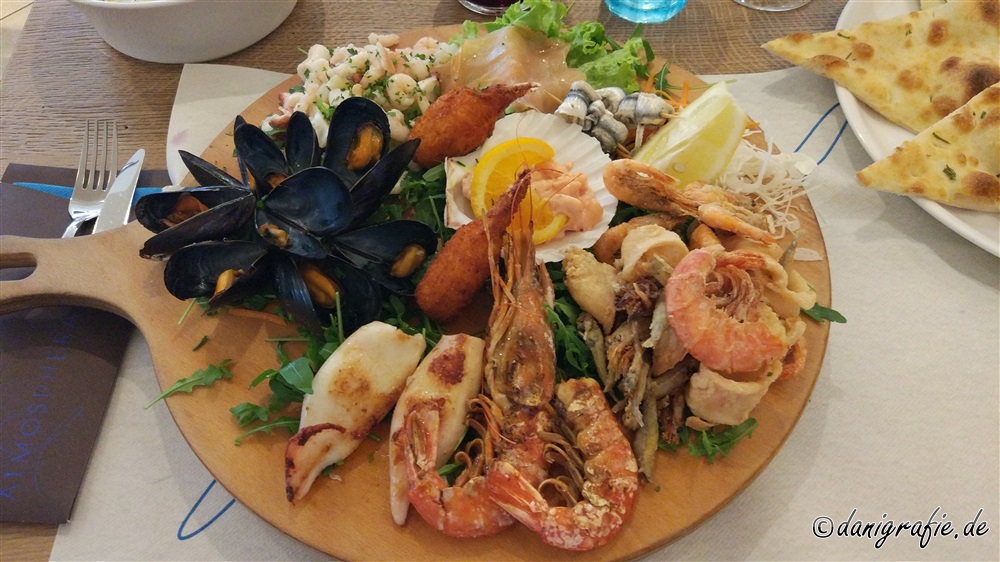 The day before was a bit demanding for the legs, so that today’s Friday should offer a little relaxation again.
After breakfast we went back to the sea as usual.

For a change we wanted to inspect the pool area in the afternoon.
However, this was not as easy as we thought:
Access only with bathing cap.
Good thing there’s a supermarket on the square selling these crazy caps.

All right, then we can relax on a couch when there is no shade.
That was a good one – we almost laughed.
For this we would have to pay 5€ per sun lounger or 15€ for 2 sun loungers and 1 parasol.
So our stay at the pool was over after 15 minutes.

The time until evening, when we wanted to go to the market to Cavallino and Lido di Jesolo, we bridged with games.
When the sun did not shine so strongly any more, we set off to the market just mentioned.
The market square was located directly in front of the municipal building of the municipality of Cavallino-Treporti.
Unfortunately there were mainly clothes and mobile phone cases for outdated models. 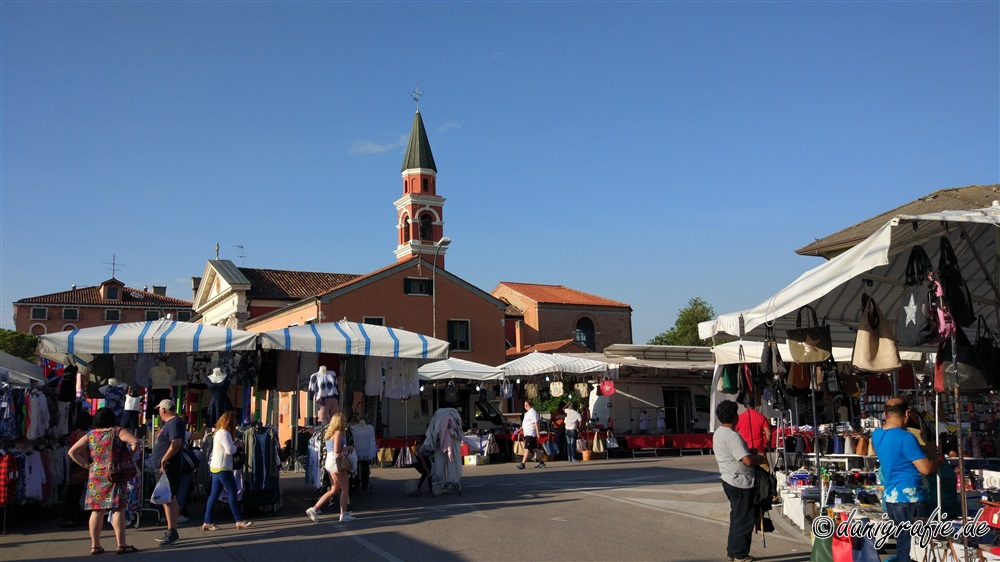 So we finished at the market much faster than expected.
Before we went back to Lido di Jesolo, I finally wanted to start my copter.
Due to the many surrounding campsites it was not so easy to find a unified starting point.
Unfortunately – or understandably – it is forbidden to fly on the beach during the swimming season.
So I had to take the panorama photo a bit offside.

Since the spot didn’t give much, I packed my copter again a short time later and we went to Lido di Jesolo.
Fortunately, we already knew from the day before where there was parking space.
Nothing else worth mentioning happened for the day. 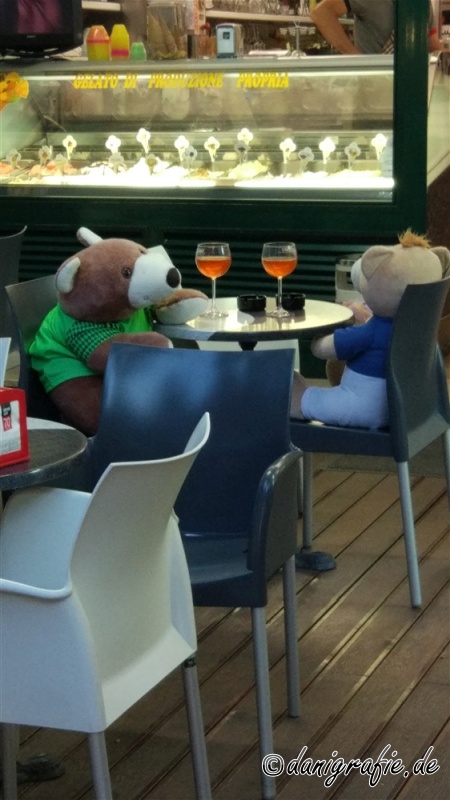 a brute date with a glass of aperol 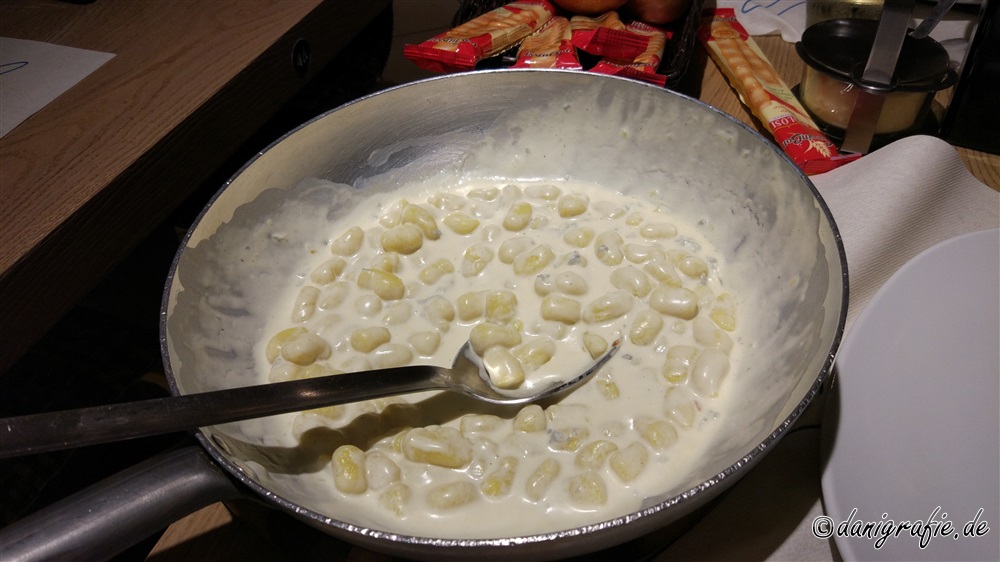 Gnocchi with Gorgonzola sauce – looks less then it is

Finally he had come – the long awaited Saturday with the round trip of the NSU participants.

After the convoy has passed our spot, I realized that I cannot overtake the convoy and reach my third planned photo location.
So I had to skip the planned third photo spot, because by now the first vehicles had probably already passed this point.
After the convoy passed us, I had time for some aerial photos.
However, I could not act as I would have liked to have.
Regular interruptions of the radio connection after less than 100m finally led me to land again.

… and then what had to happen:
During the descent, a strong gust of wind caught the copter and pushed it right into the treetop.
The whole time during the flight, it had been calm…

But now it hung there – unattainable in about 7m height… and now…?
At first I tried to somehow free the copter by throwing up my shoes.
After the second shoe hung in the tree, good advice was indeed expensive.
Fortunately, there was a landscape gardener present on the property.
Thanks to his help, about 1,5h patience and 50€ less in the bag the copter could be freed from the catches of the tree. 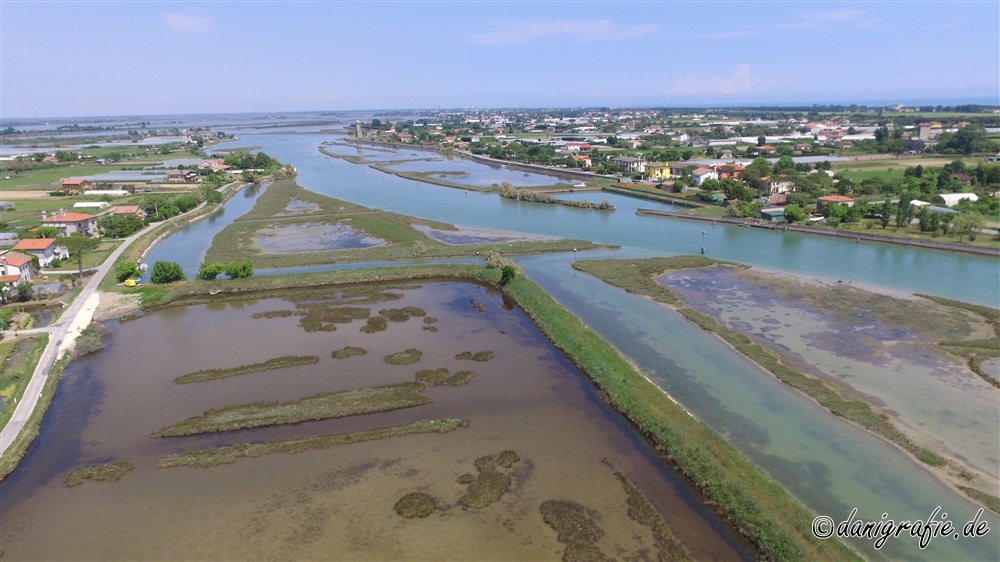 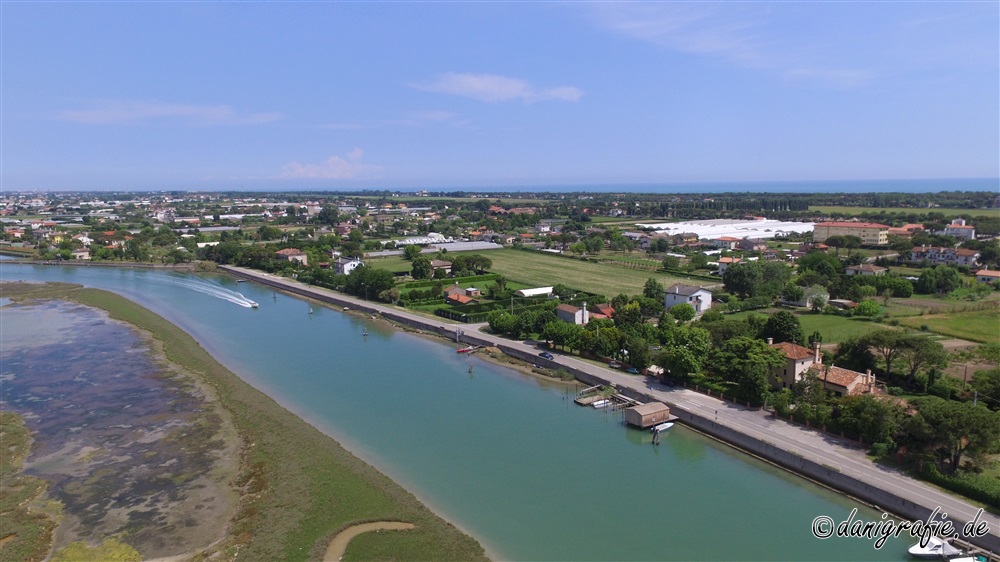 After this nerve-wracking event we just wanted to go back to the campsite.
At the beginning of our stay my girl said that she would like to look at Venice if we are already so close.
So I went spontaneously with her to Punta Sabbioni to where the ferries and ships to Venice dock and depart. 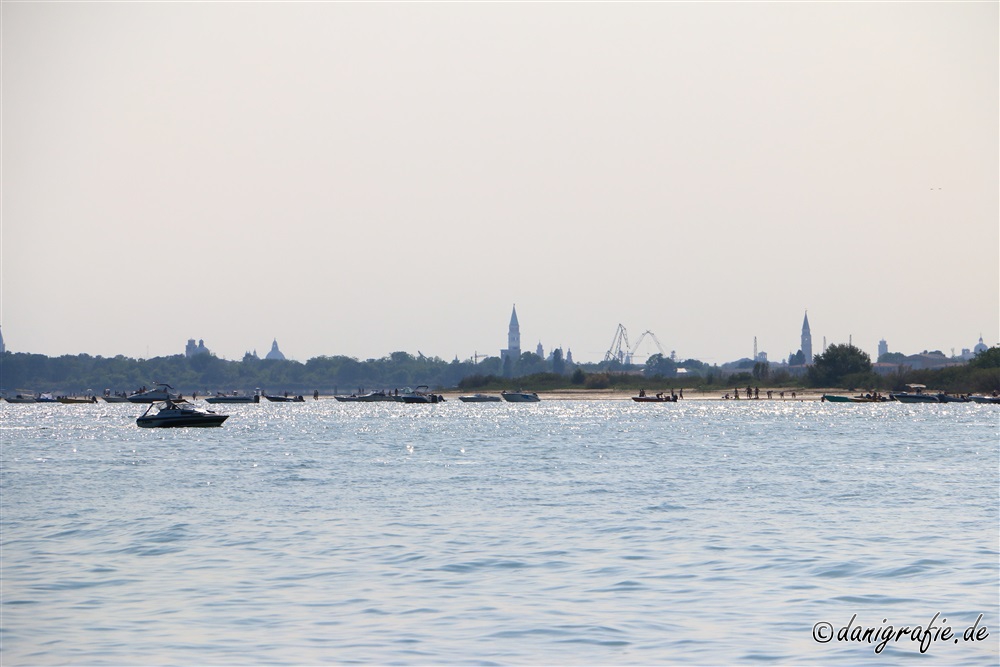 So this eventful day came to a positive end.
At the end of the day – and also of the vacation – we went again directly to the camping site Essen.
Of course there was fresh fish from the sea again for me. 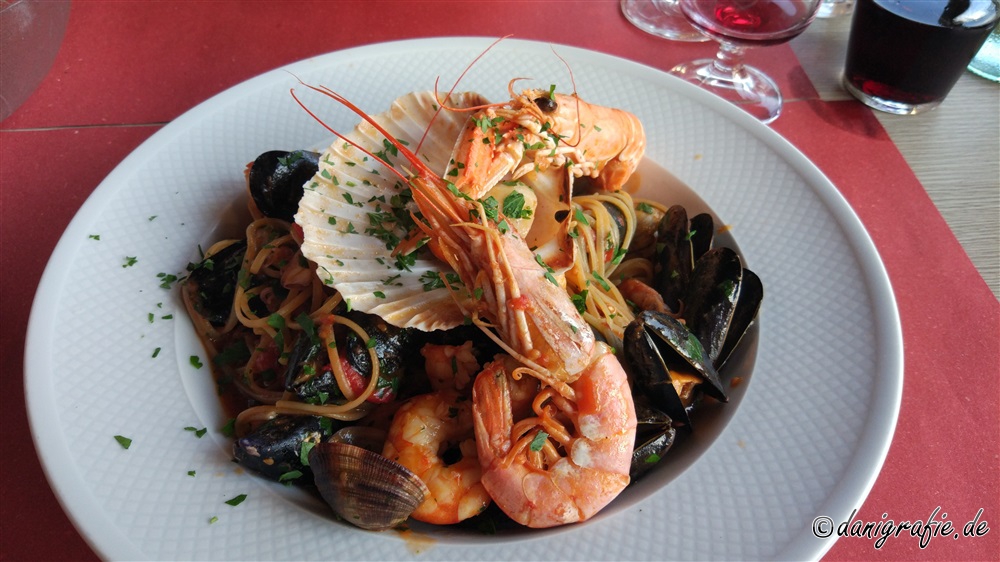 On the day of departure we had to leave the mobile home at 9:00 am.
But it was still too early to drive home.
That’s why we stopped at an Italian supermarket with various souvenirs.
But we couldn’t take too much time, because we wanted to go back to Germany for a concert in the evening.
An hour later, however, we made our way back to have enough time for possible delays.

The Katschberg tunnel on the A10 is always fascinating.
Often the weather at the portals is totally contrary.
So again this time.
When we entered the south portal we had a slightly overcast sky at around 25°C.
As soon as we left the tunnel via the north portal, we were welcomed with a heavy downpour and a cool 17°C temperature.

Despite the 20 km construction site in Italy and an extensive break in Austria, we arrived only 20 minutes later than the navigation system had calculated at the supermarket at the beginning.
In Italy you can still drive on the highway.
On the Austrian side it’s more like a relaxing ride. 😉

*Note:
The “Autostop” should be a hint to the band we visited in the afternoon.
The wanted band is called “Spider Murphy Gang” from Munich.